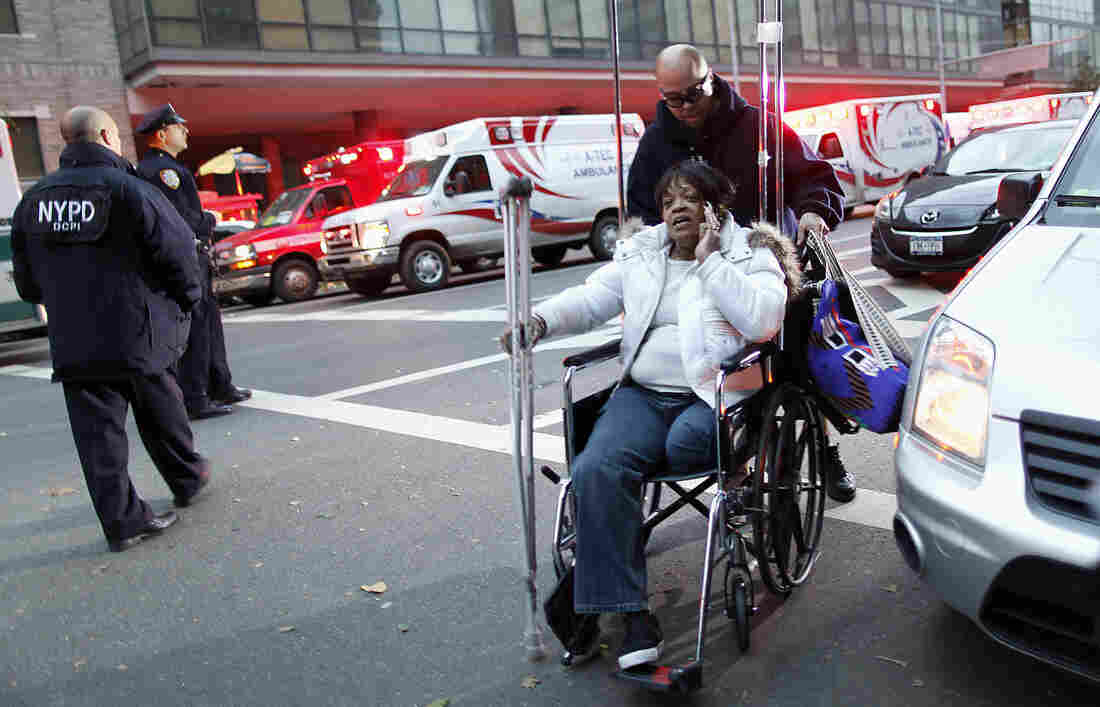 Barbara Fleming is evacuated from Bellevue Hospital by Victor Rivera in the aftermath of Superstorm Sandy in New York on Oct. 31. Carlo Allegri/Reuters/Landov hide caption

One lasting image of Superstorm Sandy will be very sick patients being evacuated from flooded hospitals. But less visible are thousands of patients who rely on visiting nurses and home health aides for care ranging from bathing and feeding to oxygen and ventilators.

Remarkably, home care providers say they know of no patients who lacked for needed care in the storm's wake. Resourceful nurses, physical therapists, aides and other personnel somehow surmounted flood, impassable roads, downed trees and dwindling gasoline to get to their patients.

"It's just been incredible to see everybody step up, even though they themselves have been without child care, school's not in session, their homes are cold, they don't have much food, they're having to wait in line for hours and hours for gasoline," home care provider Dr. Steve Landers tells Shots. "I'm sort of speechless. It's just amazing."

Landers runs VNA Health Group of New Jersey, which on a given day cares for 4,000 patients around the state with a staff of 1,600.

He says it's taking longer to make rounds, but staffers have found alternate routes around blocked roads, downed trees and flooded streets to deliver care to "a lot of scared, anxious, suffering people."

They've driven patients with kidney failure to distant dialysis centers when theirs closed down. On Thursday one nurse delivered a baby in a car when the mother was stuck in traffic. Landers says a diabetic man in his 90s was rescued from dangerously low blood sugar.

"Knock on wood, we seem to be managing," says Sherl Brandt of the Home Care Association of New Jersey. "I've been in very close contact with agencies throughout New Jersey and it's amazing what people are doing. I don't know of any cases where people didn't get needed care."

Roger Noyes of the Home Care Association of New York State says the same thing. "We've been in a lot of conference calls with emergency management officials and we have not heard of any specific cases" of patients lacking for needed care, he says, "although we're closely monitoring it. Certainly there've been a lot of delays."

Orael Keenan runs a Visiting Nurse Association in Nassau County, Long Island, where 80 percent of the area lost power – including her own office until Thursday afternoon. Phone service was out until Friday. Thirty-two of her 400 clients were evacuated from their homes to a family member or another caregiver's home.

New York State triages home care patients into three levels. Level I patients are those who would need to be hospitalized if they don't get scheduled visits.

"We were very fortunate that our clients that had to be seen lived in areas where we have nurses within walking distance," Keenan says.

Durable medical equipment companies delivered needed supplies ahead of the storm and were out again by Thursday "so anybody who needed a tank of oxygen was able to get it," she reports.

But by week's end Keenan's nurses – and those at other agencies Shots talked to – were literally running out of gas. "It's an extreme issue," Keenan says. "Some of my nurses are down to a quarter of tank and they're sitting at a gas station right now. Sooner or later, this will impact care."

But she called back later to report that nurses have been able to go to the head of the line when they show their ID and explain the situation. She hopes as power comes back, more gas stations will start pumping. In New Jersey home care agencies say state fuel depots are filling their tanks once emergency vehicles are taken care of.

Now attention is turning to a predicted winter storm expected next Wednesday.

"I can't even think about it," Keenan says. "We don't need that. But we'll take it one step at a time and go right back into our emergency mode."