Accessibility links
Malaria-Like Disease Follows Lyme's Path In New England : Shots - Health News Although Lyme disease is the most common tick-borne infection in New England, researchers find that babesiosis, a disease that mimics malaria, is catching up. The swelling population of white-tailed deer and the ticks that feed on their blood may be why.

Babesiosis Cases On The Rise 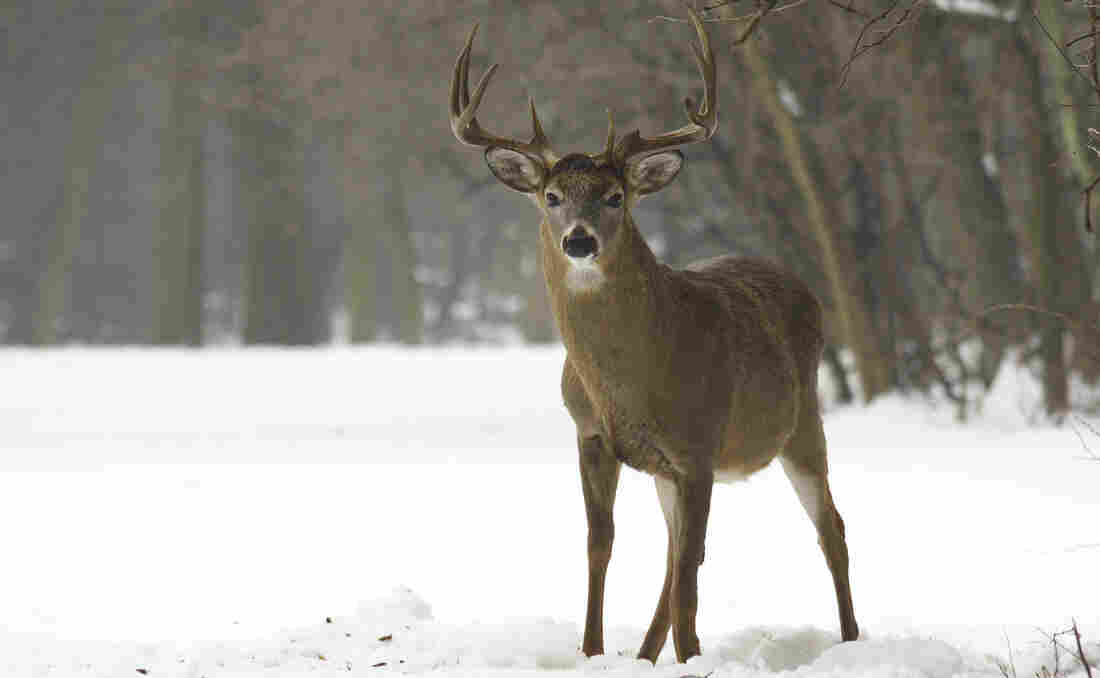 As white-tailed deer have returned to New England in the past century, they've brought with them tick-borne parasites that cause human diseases. marcinplaza /iStockphoto.com hide caption

There's more than deer lurking in the New England woods these days.

Diseases carried by ticks that hitch rides on deer are rising in the Northeast, researchers said Monday at a meeting about tropical diseases.

In particular, babesiosis — a disease that mimics malaria — is catching up with Lyme disease in some communities.

"Lyme disease is the big boy on the block," Dr. Peter Krause, an infectious disease specialist at the Yale School of Public Health, tells Shots. "But now babesiosis is spreading in a similar pattern."

Babesoisis is still far rarer than Lyme, which sends nearly 10,000 New Englanders to their doctors each year. However, Krause's colleague Maria Duik-Wassers predicts the gap is going to narrow, as the babesia parasite spreads and doctors learn to diagnose it.

Diuk-Wasser has been tracking babesiosis in Connecticut for over a decade. She says the number of cases have risen from a handful each year to about a hundred. Now the parasite is endemic in more than half of Connecticut's communities. She's seeing the same trend in New York's Hudson River Valley.

Also known as Nantucket Fever, babesiosis is malaria's first cousin. It's caused by a related parasite that infects red blood cells, and it can produce similar symptoms, including a high fever, chills and anemia. The two parasites even look like each other under the microscope.

Most people catch babesiosis from deer-tick bites. The infection is usually treatable with antibiotics and malaria drugs, but babesiosis can be fatal, especially for people with compromised immune systems. And, it can spread through donated blood. More than 150 people have been infected with babesiosis through blood transfusions since 1979.

Deer ticks are also known to be involved with two other diseases — human granulocytic anaplasmosis, or HGA, and the deer tick virus. Infections of both are also ticking up in New England and the Upper Midwest, alongside babesiosis, researchers said at the meeting.

So why are all these tick-borne diseases suddenly emerging in New England? Krause says they're not 100 percent sure yet, but they have one major hypothesis: the return of white-tailed deer.

These ticks need deer to reproduce. They provide a warm place for the ticks to survive the winter and a spot for male and females to meet up and mate. Plus, they give females a nutritious blood meal before they lay eggs.

White-tailed deer were nearly extinct from New England in the 1800s when deforestation pushed them onto just a few islands off the coast of Massachusetts and the eastern tip of Long Island.

But as farming moved west and New England forests regrew, the deer reclaimed the land and brought along ticks and their parasites.

By the 1970s, the number of tick-borne diseases present in New England shot up, and they've been slowly spreading from the coast ever since.

Each white-tailed deer may carry thousands of ticks, Krause says. "So just a few more deer can cause an explosion in ticks."