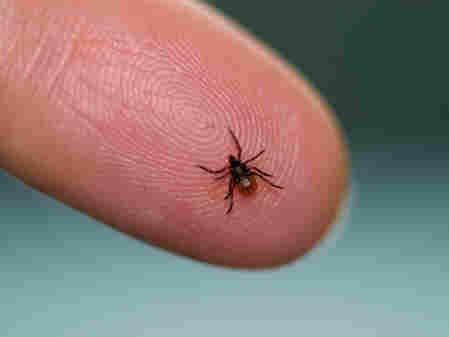 Lyme disease is spread by deer ticks like this one. A study finds that some people can be reinfected many times with the bacteria that cause the disease. Lauree Feldman/Getty Creative Images hide caption

In recent years, a disease spread by ticks has become more common across the country.

Lyme disease causes a skin rash, and in some cases, more serious symptoms. The rash usually goes away with antibiotics, but some people say they have other symptoms that persist for months or years.

Now a study published in the latest issue of The New England Journal of Medicine suggests those with a recurring rash don't have one long illness. Instead, they're getting new infections from fresh tick bites.

Researchers recently conducted an experiment in which they examined Lyme disease-causing bacteria in the blood of 17 patients suffering from a recurrence of the rash. Then they compared these bacteria to a sample taken from the same patients during an earlier flare-up of Lyme symptoms.

If Lyme disease actually were a chronic condition, you'd expect the two bacteria samples to be identical. But they weren't.

"These were different bacteria," says Dr. Robert Nadelman, an infectious disease specialist at New York Medical College. "One can infer from that that these are different infections, and therefore caused by different tick bites, as opposed to people who possibly could have had relapses of infections that weren't adequately treated."

For many people, Nadelman says, it's easy to get newly infected with Lyme disease — especially for those living in the Northeast.

When a deer tick carrying the Lyme disease bacteria bites, the resulting rash can look like this bull's-eye. Getty Images/CDC hide caption

Not every doctor agrees with the findings. Dr. Samuel Shor, a professor at George Washington University, says a study examining only 17 patients isn't large enough to draw any conclusions.

Still, whether or not Lyme disease is a chronic condition, in rare cases, it is a very serious condition.

Dr. Allen Steere, a rheumatologist at Massachusetts General Hospital who's studied Lyme disease for decades, says that without treatment, Lyme disease can lead to abnormalities in the heart and brain within weeks of an infection.

He says patients at risk of contracting Lyme disease will notice a bug bite surrounded by a red rash that expands slowly and eventually grows to the size of a plate or even larger. Steere says if patients see this and also feel stiff, achy or feverish, they should see a doctor immediately.