Accessibility links
When Fetuses Yawn In The Womb : Shots - Health News Ultrasound often catches fetuses opening their mouths, but whether they're really yawning or not has been up for debate. Now, with some fancy ultrasound techniques, scientists have show that babies do indeed yawn in the womb.

When Fetuses Yawn In The Womb

When Fetuses Yawn In The Womb 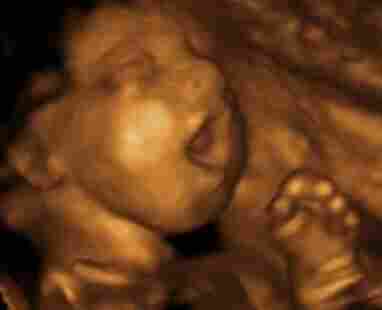 Could that be a yawn? An ultrasound scan catches an opened-mouth fetus. Courtesy of A Little Insight 3D 4D Ultrasound. hide caption

Why people yawn is a mystery. But yawning starts in the womb.

Past studies have used ultrasound images to show fetuses yawning, but some scientists have argued that real yawns were getting confused with fetuses simply opening their mouths.

So Nadja Reissland, a researcher at the University of Durham in the United Kingdom, used a more detailed ultrasound technique to get images of fetal faces that could distinguish a true yawn from just an open mouth.

"They seem to open their mouths widely much less often than they yawn," Reissland says.

What's more, she found that yawning was common at 24 weeks but then dropped to zero at 36 weeks, according to a report by Reissland and her colleagues in the journal PLOS ONE.

Reissland believes that fetal yawning may somehow help trigger brain maturation, by acting as a kind of self-stimulation for the developing fetus.

"It could be that yawning is something which you need in order to have a functioning brain, which is a hypothesis," she says, adding that she would like to compare yawning in healthy fetuses, like the ones she studied, with yawning in fetuses that have medical conditions.

Reissland says she suspects that yawning has a different function for adults than for fetuses. Most studies on yawning have focused on its contagious nature. But some research suggests that children are immune from "catching" another person's yawn until about five years of age.