Accessibility links
In Juvenile Detention, Girls Find Health System Geared To Boys : Shots - Health News A growing number of teenage girls are incarcerated each year. Many have injuries consistent with sexual assault, and up to a third are or have been pregnant. But the care provided in detention is often inadequate for girls because the assessment of their needs misses the mark.

For the growing number of teenage girls who are incarcerated each year, detention may be the only time they get health care.

But the care provided to girls in juvenile detention is often a poor match for their needs.

One reason: It's a system that was designed for boys. 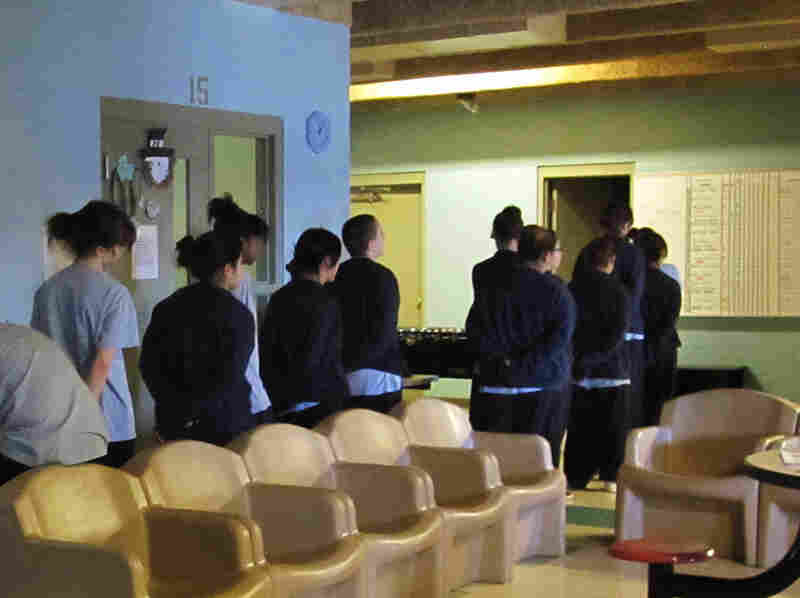 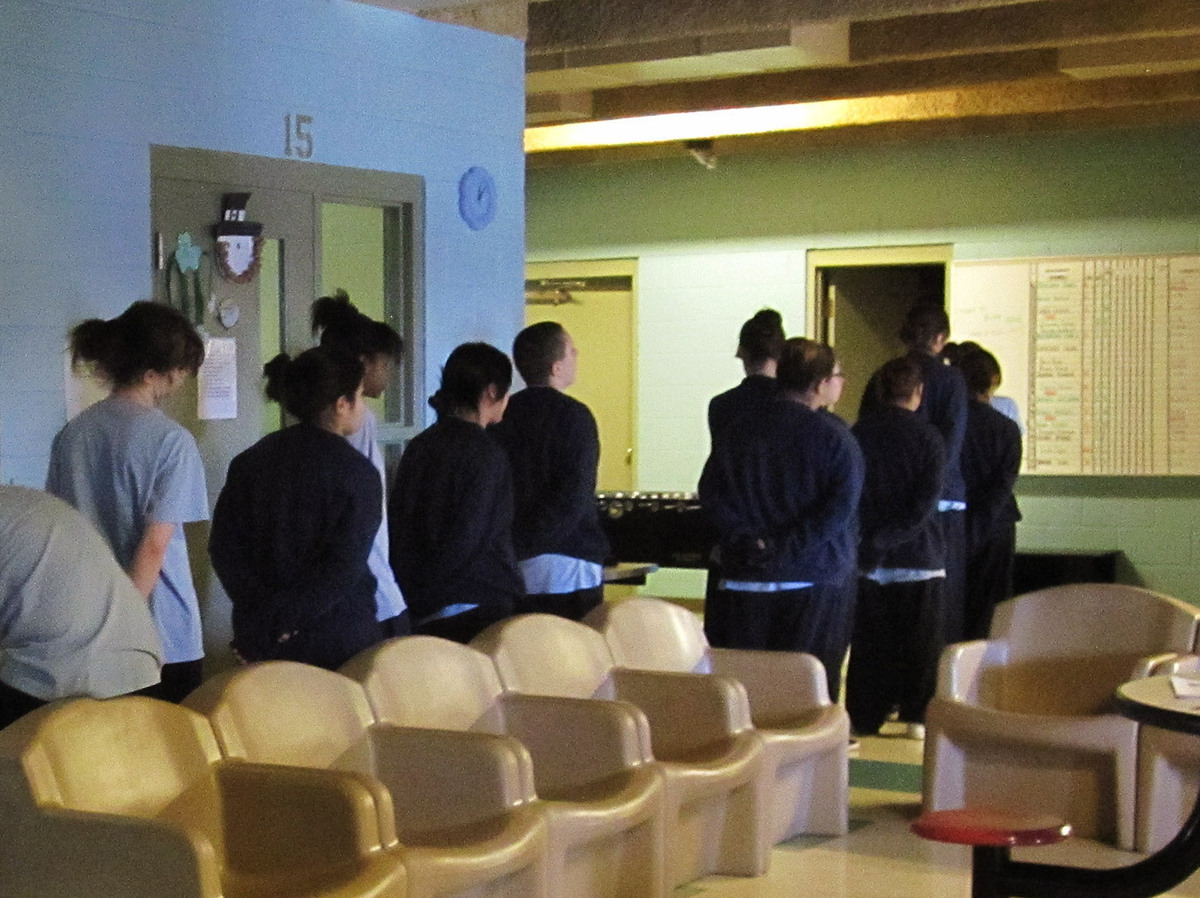 Girls line up at the Bernalillo County Juvenile Detention and Youth Services Center in Albuquerque, N.M.

Girls in detention are "one of the most vulnerable and unfortunately invisible populations in the country," says Catherine Pierce, a senior adviser at the federal government's Office of Juvenile Justice and Delinquency Prevention.

Up to 90 percent of these girls have experienced physical, sexual or emotional abuse, Pierce says.

Their health statistics are particularly grim: 41 percent have signs of vaginal injury consistent with sexual assault; up to a third have been or are currently pregnant; 8 percent have had positive skin tests for tuberculosis; and 30 percent need glasses but don't have them, according to research from the National Girls Health and Justice Institute.

Reylene, who asked that her full name not be used, was 17 a few months ago when she arrived in handcuffs at the Bernalillo County Juvenile Detention and Youth Services Center in Albuquerque, N.M., after being arrested for larceny and breaking and entering.

She received much the same treatment as if she were a boy.

First, Reylene was given a full pat-down to check for contraband, like drugs or weapons. After showering and putting on her uniform, she was given a brief health screening to make sure that she didn't need emergency medical services before being booked.

The screening lasts about 15 minutes and is given by the facility's staff nurse in a small room attached to the intake area.

The door remains open for security purposes, with guards and new residents passing by. Without privacy, girls are unlikely to reveal important health information, especially when they have previously been victimized, says Leslie Acoca, a psychologist and researcher who has studied the health care of girls in detention for more than a decade.

Reylene was weighed and measured, and had her vital signs taken. The nurse briefly evaluated her physical and mental state, noting her judgment, speech and mood. Next, the nurse asked a series of about 35 questions from the facility's medical intake form, including a list of her current medications, whether she had taken alcohol or drugs in the past 24 hours, was feeling suicidal, or if she had a history of self-destructive behavior.

There are a handful of questions given only to girls: Are you pregnant? If so, have you started prenatal care? What form of birth control do you use?

During the screen, however, Reylene didn't mention a major health issue: painful red burns across her breasts.

"Usually I'm pretty straightforward, but, like, I lied to [the nurse] when I first came in here, about my burns," says Reylene, who explains that she doesn't know exactly what happened because she was passed out when she was burned.

The nurse saw the burns through her tank top, but Reylene was evasive because she didn't want them to be investigated. "If we're in the detention center ... we don't know who to trust, because we're vulnerable," she says.

Reylene says she had to ask several times for ointment.

The Girls Health Screen consists of 132 questions that would be asked of all girls upon arrival in a detention facility. The screen can be given by a nurse, or the girls can fill it out on their own on a computer.

The Bernalillo center recently agreed to try out the Girls Health Screen. Of the 30 girls at the facility who participated in the pilot, 12 were identified as needing immediate medical care, and 23 as needing medical care within 24 hours. Some of these health issues had been missed when the girls went through the center's standard health screening procedure.

Acoca says that if Reylene had taken the Girls Health Screen on a computer, the burns would have triggered an immediate medical response.

"There would be a little flag that would go, 'Ding, ding, ding! Ointment for burns!' " Acoca says.

But Veronica Crespin, one of the nurses at the facility, says that Acoca's screen takes too long and finds problems they already knew about. And they don't have the staff.

"It's just very busy. Most of the time it's one nurse per shift. And there's multiple intakes," Crespin says

Acoca argues it's worth it to make the time. Her research has yielded a surprising finding: Poor physical health seems to increase girls' risk of recidivism. In other words, girls who have health problems are more likely to reoffend and end up back in the criminal justice system.

The Albuquerque center hasn't decided yet whether to adopt Acoca's health screen. But Los Angeles County began using it in June, and six other California counties are considering it.