Accessibility links
Clinton Reveals Blueprint For An 'AIDS-Free Generation' : Shots - Health News HIV has been declining in many parts of the world over the past decade. Today the U.S. unveiled an ambitious plan to stop most new HIV infections around the world. But some health leaders question whether their goals are realistic, especially with impending budget cuts. 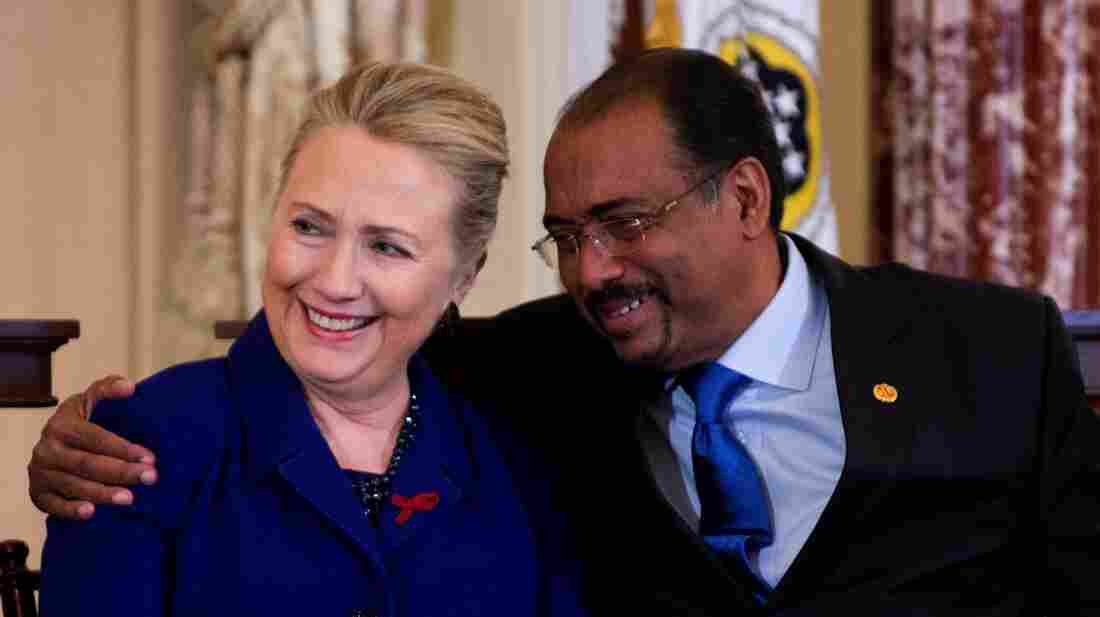 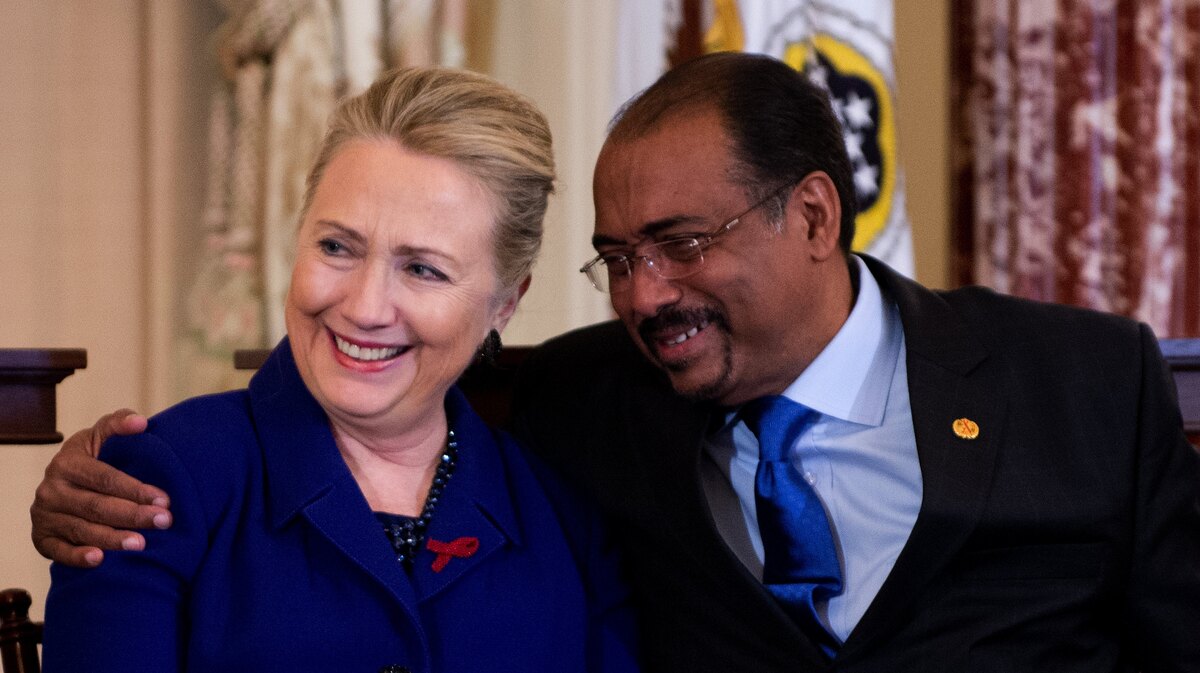 United Nations Aids Executive Director Michel Sibide hugs Secretary of State Hillary Clinton after they they presented the a road map for stopping HIV around the world.

Before Secretary of State Hilary Rodham Clinton passes the reins to her successor, she's got a few loose ends to tie up. One of them is mapping out the U.S.'s continuing efforts to combat AIDS around the world.

So today she unveiled a "blueprint" for what she called an "AIDS-free generation."

Now Clinton isn't talking about ending the HIV pandemic altogether. Rather, she hopes to prevent most new infections from occurring in the first place and to stop HIV-positive people from developing AIDS.

"As we continue to drive down the number of new infections and drive up the number of people on treatment, we will get ahead of the pandemic and an AIDS-free generation will be in sight," she told an audience of AIDS advocates and government officials at the state department.

Just last week UNAIDS said that over the past decade the rate of new HIV infections has dropped by more than half in 25 low- and middle- income countries, most of them in sub-Saharan Africa. And, the U.S. has helped to get 5.1 million people on antiretroviral treatment over the past four years.

Yet despite this encouraging news, some public health leaders are skeptical that an AIDS-free generation is a realistic goal right now.

"We are still a very long way from that," Dr. Helen Rees, an HIV specialist at the University of Witwatersrand in South Africa, tells Shots. "It's still at this point aspirational, and it's good to have aspirations."

The goal of stopping new infections became theoretically possible just a year ago when a study showed that antiretroviral treatments dramatically reduce a person's risk of transmitting the virus to others.

But the jury is still out on whether the drugs will have the same effect in the real world, outside of a study, Rees says.

"We certainly know that when you lower people's viral loads through treatment, the chance of their infecting another person is massively reduced," she says, referring to the amount of HIV in the blood. "[But] we don't know if that sort of scenario will occur at the same rate as if we did test-and-treat in the general population."

Clinton's AIDS blueprint hinges heavily on a "treatment as prevention" strategy. Indeed, the President's Emergency Fund for AIDS Relief, or PEPFAR is spending millions of dollars to see if it will in South Africa, Tanzania and Botswana, health economist Mead Over, of the Center for Global Development, tells Shots.

He says it will take several years to get the results. And that's one reason, he says, that "it's premature to have as an objective achieving an AIDS-free generation."

The tipping point for AIDS, Over says, will be when the number of new infections is lower than the number of people dying from HIV. Once that happens, the total number of HIV positive people would begin to decline.

"That's not the case now," he says. "In fact the gap is widening as we speak."

Over also worries that there aren't enough resources right now to treat enough people to achieve a decline in infection rates by treatment alone.

These approaches, in combination with treatment, "drops the number of new infections quite precipitously," the U.S. Global AIDS Coordinator, Dr. Eric Goosby, tells Shots. "So much so that we have dropped the percentage of new infections over the last 5 to 10 years from 25 to 90 percent in most of sub-Saharan Africa."

So what will all this cost the U.S.?

Secretary Clinton didn't say – nor does her blueprint.

Goosby says those numbers exist, but he couldn't get out ahead of the White House, which writes the budget.