Accessibility links
Lead Poisoning Cases Offer New Reminder About Hazards Of Ancient Remedies : Shots - Health News Ayurveda is a form of traditional medicine that's thousands of years old. But some ayurvedic remedies have harmful heavy metal additives, including lead. And those remedies are finding their way to the U.S., as two recent cases of childhood lead poisoning in New York attest. 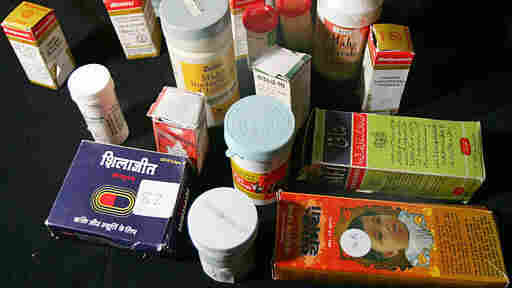 The Ayurvedic remedies above were included in a 2004 study by researchers at Harvard Medical School that found dangerous levels of heavy metals in 14 out of 70 products. CHITOSE SUZUKI/ASSOCIATED PRESS hide caption

These days, just about everyone seems to be looking for more natural alternatives to what they eat and drink. So it's easy to see the appeal of traditional medicine. But as two recent cases from New York City highlight, just because a remedy is ancient or holistic doesn't necessarily mean it's safe.

Last week, New York City health officials reported the city's first two cases of childhood lead poisoning related to Ayurveda, an ancient Hindu medical tradition that dates back some 5,000 years. In both cases, the children — a 2-year-old and a 4-year-old — were taking Ayurvedic medications that had boosted their blood lead levels far beyond the 5 micrograms per deciliter level considered dangerous for kids under 5.

"Most childhood lead poisoning still comes from dust from lead paint in one way or another, so that's why these cases stick out — because they're not the usual type of lead poisoning," Nancy Clark, assistant commissioner for environmental disease prevention at the New York City Department of Health and Mental Hygiene, tells Shots.

Ayurveda is practiced by hundreds of millions of people in India and Sri Lanka. Practitioners believe that everybody has their own energy pattern. When you're sick, it means your energies are out of whack with the universe. Remedies seek to restore that balance and usually involve mixtures of herbs, as well as changes in diet and lifestyle.

But in one type of ayurvedic medicine, rasa shastra, ground-up gems and heavy metals are mixed in with herbs. Although practitioners believe that their mixing techniques make these formulations safe, the scientific evidence suggests otherwise.

In a 2004 survey of some 70 ayurvedic medications on the market, about 20 percent contained toxic levels of heavy metals — including lead, mercury and or arsenic — according to findings published in JAMA, the Journal of the American Medical Association. That number included not just rasa shastra medications but other ayurvedic drugs that appear to have gotten contaminated during the manufacturing process.

Ayurveda isn't very widespread in the U.S.: In 2006, only about 200,000 adults in the country used some form of ayurvedic medicine, according to data from the Centers for Disease Control. Many are immigrants of Southeast Asian descent — including both families involved in the New York City lead poisoning cases.

Both families obtained their lead-containing ayurvedic medications from India. But such medications are also readily available for purchase online. And your chances of receiving an ayurvedic remedy with traces of heavy metals are about the same whether you buy from a U.S.- or India-based website, says Robert Saper, the director of integrative medicine at Boston Medical Center, who has authored several studies on the safety of ayurvedic remedies.

The 4-year-old victim in New York was prescribed the drug for brain development; it boosted his blood lead levels to 16 micrograms per deciliter, city health officials said. The bitter irony, of course, is that lead exposure is particularly dangerous for developing brains and can stunt neurological development.

Health officials caution against condemning all ayurvedics. But they urge doctors with Southeast Asian patients to bring up the subject and suggest taking a blood test.

"We shouldn't throw out the baby with the bathwater," Saper tells Shots. "There are lots of traditional medicines that may be beneficial. Turmeric, for example, has been shown to have anti-cancer properties."

A previous version of this post said that a lead concentration of 5 micrograms per deciliter of blood is considered safe for young children. Doctors say no level of lead is safe.