Accessibility links
UOK? 'Dystextia' Alerts Doctors To Neurological Problems : Shots - Health News The inability to send coherent text messages, or 'dystextia,' is helping doctors diagnose neurological problems. In one recent case, a series of garbled text messages was an early signal that a woman was having a stroke. 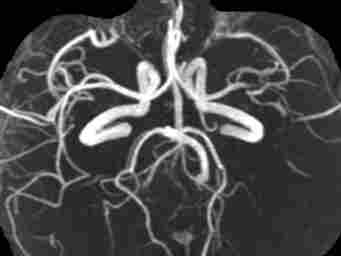 Doctors used a type of MRI test to look at the blood vessels in the brain of a woman with dystextia. The test confirmed she was suffering from a stroke on the right side of her brain Archives of Neurology hide caption

A young, pregnant woman went for a routine doctor's visit to find out her due date. As she was leaving the office, she got a text message from her husband:

Husband: So what's the deal?

Wife: Every where thinging days nighing

Wife: Some is where!

Husband: What the hell does that mean?

Husband: You're not making any sense.

Turns out the woman was having a stroke. And her garbled texting — something doctors are now calling 'dystextia' — was an early clue to the problem.

Concerned by the nonsensical messages, the husband met up with his wife and rushed her to the emergency room. Neurologists quickly realized that a region of her brain involved with language was damaged.

"The dystextia was the first clinical sign that we had that she was having a stroke," Dr. Joshua Klein at the Brigham and Women's Hospital in Boston, Mass., tells Shots.

Impaired speech is a common sign of a stroke, he says. But in this case, the woman had lost her voice because of a cold. So the series of mangled messages were the smoking gun of a language problem.

He and his colleagues describe the case in the Archives of Neurology.

The dystextia wasn't essential to diagnosing the stroke, Klein says. They would've figured it out from tests they ran and other symptoms, such as numbness in the woman's right arm. 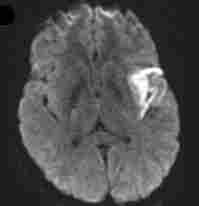 Another MRI of the woman's brain showed signs of a stroke in a region involved with language. Archives of Neurology hide caption

"But it [the dystextia] was an unusual piece of data that fit with the other clinical findings," he says. "It helped us understand the nature of the problem."

The woman luckily suffered no permanent damage and quickly recovered her ability to speak and to text.

Dystexia has been linked to a stroke at least once before. And it's been seen in a patient with a complex migraine, which can cause a variety of neurological symptoms, such as difficulty speaking and vision loss.

But there are many reasons why people mess up texts messages: You can be walking, driving, drinking or just generally distracted.

So how do you know when dystextia is cause for concern?

Everything has to be taken in context, Klein notes. But he says if someone is having a problem communicating for some unknown reason, whether it be talking, texting or even reading, they should get checked out by a doctor.

In particular, Klein says, some warning signs of stroke include problems formulating the words you want to text, trouble typing the text because your fingers are numb or weak, or sudden vision loss.

As you probably know, though, many smartphones have an autocorrect function that can introduce erroneous word substitutions in messages. "This can give the false impression of a language disorder," Klein says. "In our patient's case, autocorrect had been previously disabled on her mobile device."