Accessibility links
Shootings Leave Sandy Hook Survivors Rethinking The Odds : Shots - Health News The probability that an individual will experience a school shooting may be low. But when the improbable happens to you, where do you find comfort? 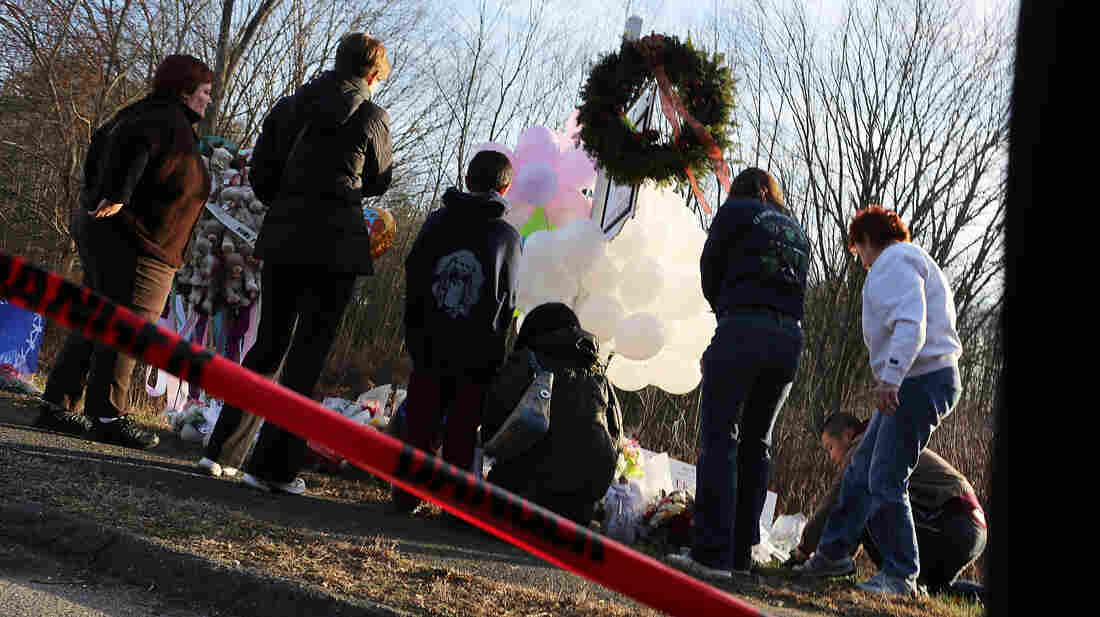 About a month ago, Declan Procaccini's 10-year-old son woke him early in the morning in a fright.

"He came into my bedroom and said, 'Dad, I had a horrible, horrible dream!' " Procaccini says. "He was really shaken up. I said, 'Tell me about it,' and he told me he'd had a dream that a teenager came into his classroom at his school and shot all the kids in front of him."

Procaccini's son is a sensitive kid, frequently anxious, so Procaccini did what he often does when his son crawls into his bed with a fear or anxiety: He explained why the fear wasn't rational by simply laying out the math.

"The chance of that happening here are 1 in a zillion," Procaccini told his son, and then continued with a lesson about probabilities and possibilities. "You know, it's possible that Godzilla could right now come through the trees? Yes. But is it probable? No. I think we both know that it's not probable."

This discussion seemed to calm his son down a bit. He shook off his dream and returned to life as usual.

"That worked out for a little while," Procaccini says.

And then Procaccini's community became the "1" in "1 in a zillion."

'I'm Going To Need Help For A Long Time'

The day Adam Lanza shot his way through Sandy Hook Elementary School, Procaccini's 8-year-old daughter was in a reading room just down the hall from the principal's office.

She had walked herself to her class early and was sitting there with two teachers when the three of them heard the sound of gunfire coming from outside.

"They grabbed my daughter by the arm and threw her into the bathroom," Procaccini says. "There's a little bathroom off the reading room, I think it's a single-person ... and the three of them just sat in there, quiet, 'cause he came into the room."

Apparently, Lanza didn't hear them because he left, and everyone in the tiny bathroom survived.

In the days after the shootings, though, one of the teachers who had been at the school and knew Procaccini well reached out to him and his wife, Lisa. She wanted them to know just how terrifying their daughter's experience had been.

But since the shootings, Procaccini's daughter has barely talked about what happened, barely registered any emotional distress at all.

His 10-year-old son, however, has been struggling. Procaccini's son graduated from Sandy Hook Elementary last year and now attends Reed Intermediate School, which went into lockdown during the shooting, so the boy had no idea what was happening until Procaccini picked him up and told him about it. Immediately, Procaccini says, his son started crying. "I mean, he was crying like a little baby. I haven't seen him cry like that, you know? He was so scared."

And as soon as they got home, Procaccini says, his son made a decision: no more school for him. "I'm not going!" he insisted over and over again.

But when Procaccini's family went to see a therapist the next day, one of the things the therapist made clear was that staying away from school was a bad idea. The more school his son missed, she told Procaccini, the harder it would be to get him to go back.

And so on Tuesday of last week, when Reed went back into session, Procaccini tried to persuade his son to go.

For the rest of the week, Procaccini and his son simply drove to the school and walked together through the halls for hours, Procaccini's car keys safely tucked into his son's coat pocket so that Procaccini couldn't drive away by himself.

This procedure was supposed to convince his son that school really was a safe place, but his son doesn't seem to be buying it, and Procaccini is worried about what will happen after the holiday break.

Since the shootings, Procaccini's son hasn't had another dream, but Procaccini is certain that if he does, there will be at least one difference in the way that Procaccini responds. Procaccini won't talk about probabilities and possibilities again. That argument suddenly doesn't make any sense.

'Something Somewhere Will Happen'

Zhihong Yang, another parent of a Sandy Hook student, lives two miles away. Yang tells me to call her Jen, and when I walk in, there's a small pile of papers spread over the table in her kitchen, handouts for Sandy Hook Elementary parents distributed at a conference the night before.

Yang's son Jerry is in the third grade and was at Sandy Hook during the shooting. Unlike some of the other kids who were at the school, he genuinely seems to be doing OK. But for her part, Yang finds herself thinking about things she had never considered before.

This makes sense, since death is all around Yang. Take her drive to school. Her usual seven-minute route is now lined with families affected by the tragedy. "At least four families that had victims in that accident," she says, "and when I drive by I feel the pain and I do cry."

Yang is from China. She says that in college there, she studied math, and then suddenly — totally without prompting — I find myself in another conversation about possibilities and probabilities. Yang, it turns out, specialized in statistics, and since the shooting has been thinking a lot about possibilities and probabilities, reconsidering her original feelings about them.

Yang tells me that she had always assumed that she was safe because the chance of a shooting happening to her specifically was very small. But since the shooting she's been focused on this one rule of statistics she learned in college, which she calls the "large number certainty theorem."

"If the base is big enough," she explains, "even though the probability is small, things will happen with certainty."

By Yang's reckoning, this is how the large number certainty theorem applies.

"So, you know, mathematically, something somewhere will happen with certainty," she says.

And so though Yang previously depended on the idea that school shootings were so rare they would probably happen to someone else, the shooting has taught her that "we should not wait until it actually happens to us to take action."

Yang has decided to get more involved with fighting for gun control. This, to her, seems like the logical thing to do.

Still, the logic of many parts of all this are not clear to her at all.

"You can safely predict that this will happen, but why it particularly happened to that class? To that teacher's room? That particular family?" she says.

This obviously is not a question that math can answer. Math can tell us only that something will happen — not when, not to whom.