Accessibility links
As Biodiversity Declines, Tropical Diseases Thrive : Shots - Health News Researchers argue that ecology has a pretty big say in whether disease rates increase or die down. They used a new field that blends economics and ecology called "macroecology" to figure out how biodiversity loss affected disease burden. 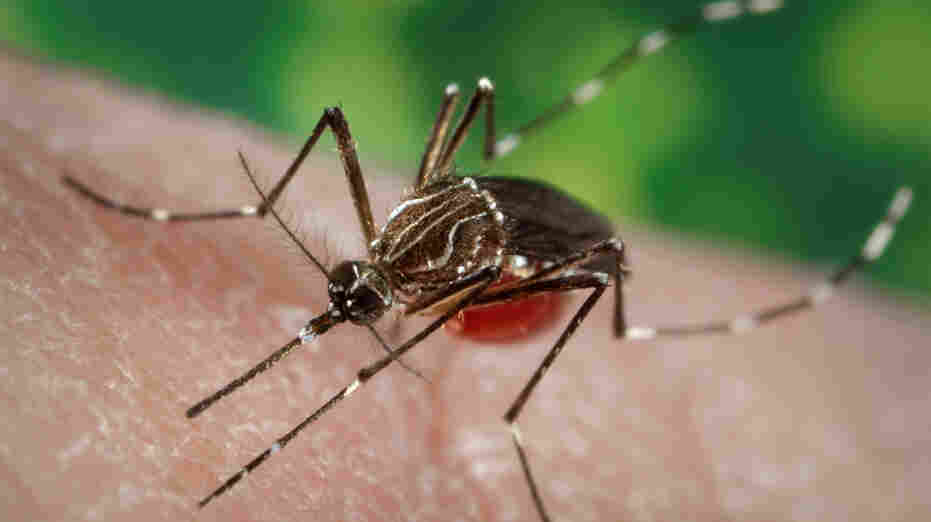 Mosquitoes like this one can carry the virus that causes dengue fever, which may become a bigger problem in some regions as biodiversity is lost. James Gathany/CDC Public Health Image Library hide caption

Global health advocates often argue that the tropical diseases that plague many countries, such as malaria and dengue, can be conquered simply with more money for health care – namely medicines and vaccines.

But a new paper is a reminder that ecology also has a pretty big say in whether pathogens thrive or die off. Using a statistical model, researchers predicted that countries that lose biodiversity will have a heavier burden of vector-borne and parasitic diseases. Their results appear this week in PLoS Biology.

"The general logic is that the more organisms you have out there, the more things there are that can interrupt the life cycle of disease, and the less concentration you'll have of any vector," Matthew Bonds, a researcher at Harvard Medical School and the lead author of the paper, tells Shots.

But plants, mammals and birds are disappearing fast – one-third of the world's species are now threatened with extinction, according to the United Nations. And when the creatures that prey on mice, mosquitoes or other vectors of disease go, parasites and other disease-causing agents discover it's a lot easier to survive.

Scientists have already shown that's one reason for the explosion of Lyme disease in the Northeast United States. A 2002 paper in the Proceedings of the National Academy of Sciences found that if you have a rich community of tick hosts, like squirrels, mice and other small mammals, the disease is diluted among them. But if the habitat is degraded, and ticks carrying Lyme have only white-footed mice as hosts, the disease risk to humans can rise dramatically.

West Nile encephalitis, a mosquito-borne disease, has also ripped through communities with the help of surging bird populations, according to a study in Nature.

Because of studies like these, Bonds wanted to see how strong the causal relationship was between biodiversity and 12 common vector-borne and parasitic diseases on a global scale. So he chose statistical methods from a new field that blends economics and ecology called "macroecology" to figure out how biodiversity loss affected disease burden, controlling for several different variables.

Ultimately, he found that if a country with a relatively high biodiversity (such as Indonesia) were to lose 15 percent of it, the burden of disease would be expected to increase by about 30 percent. His models also showed how diseases have a significant impact on economic development and explain differences in income between tropical and temperate countries.

"I think what this shows is that the burden of disease is really important, and it's not just driven by health care," he says. "These diseases spend so much of their life-cycles outside of humans, so they're part of the physical environment."

Nevertheless, human disease is still generally viewed as a medical or public health problem — not an ecological problem. Policymakers only just beginning to talk about conservation as they plan for public health.