Accessibility links
Research Moratoriums And Recipes For Superbugs: Bird Flu In 2012 : Shots - Health News When scientists figured out how to make the deadly H5N1 virus more contagious, a debate ignited about whether to publish the research and do more experiments. Over the past year, scientists published the contentious work, but they still can't agree on the field's future. 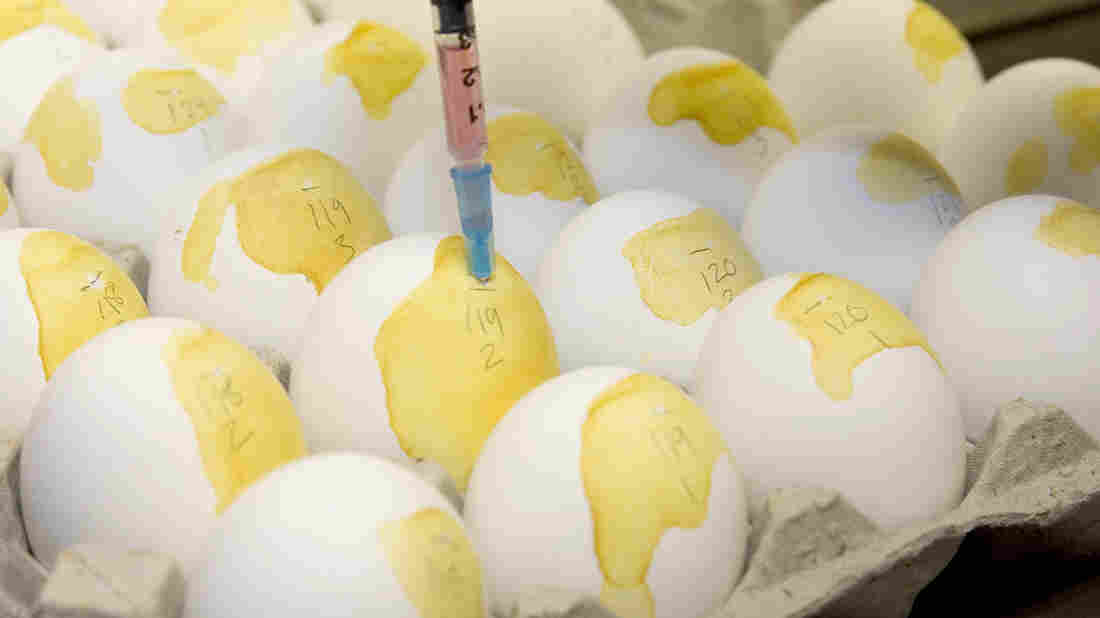 Researchers at the U.S. Geological Survey National Wildlife Health Center in Madison, Wis., use eggs to see if the Asian strain of the H5N1 bird flu virus has entered the U.S. in this photo from 2006. Andy Manis/AP hide caption 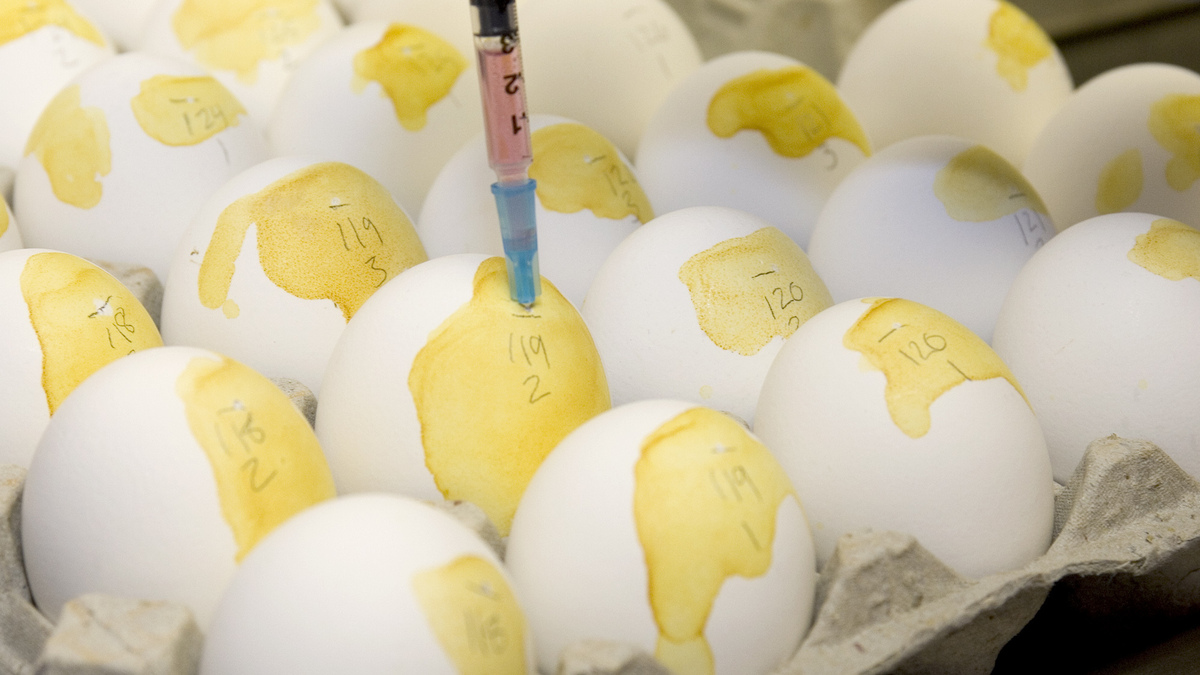 Researchers at the U.S. Geological Survey National Wildlife Health Center in Madison, Wis., use eggs to see if the Asian strain of the H5N1 bird flu virus has entered the U.S. in this photo from 2006.

For scientists who study a dangerous form of bird flu, 2012 is ending as it began — with uncertainty about what the future holds for their research, but a hope that some contentious issues will soon be resolved.

Last January, dozens of flu experts around the world agreed to what was supposed to be a 60-day pause in controversial experiments on the H5N1 bird flu virus. But none of them resumed work as planned because all year long, the debate over the benefits and the risks just wasn't going away.

Virologist Ron Fouchier of Erasmus Medical Center in the Netherlands says he reluctantly went along with the moratorium, "but I've not been a great advocate of it because there is urgency in this type of research."

Fouchier gets funding from the National Institutes of Health to study H5N1, which is widespread in poultry in parts of Asia and the Middle East.

H5N1 rarely infects humans, but more than half of those known to have gotten sick with it have died. Scientists have long wanted to know if this bird flu could mutate in a way that could make the virus start spreading between people and cause a pandemic.

If this was a circumstance where there was an easy path forward, where you could simply write down in an afternoon how best to handle this, well, we would have done that.

So Fouchier's lab experimented with the virus and found that certain genetic changes did make it capable of spreading through the coughs and sneezes of ferrets, which are the lab stand-ins for people.

This discovery provided important new clues about how future pandemics might emerge from nature. But at the same time, the findings were basically the recipe for creating a superflu — one that might kill millions.

That's why a panel of government advisers initially recommended against publicly revealing the details of both this experiment and another one like it done at the University of Wisconsin-Madison.

"I think the biggest fear that we had was that these experiments were going on without the appropriate public dialogue," says Paul Keim, a microbiologist at Northern Arizona University, who chaired the panel.

For years, biologists have talked about the question of how to handle legitimate research that might produce information that could be misused to cause harm. But this so-called dual-use problem was largely theoretical in the life sciences. The bird flu research made it painfully real.

Months went by as everyone scrambled to figure out what to do. Scientists argued at conferences and published op-eds. The World Health Organization held a closed-door meeting of flu experts. Officials tried, unsuccessfully, to find some legal way of giving the key details only to people who needed to know.

In the end, science journals did openly publish full reports describing the studies in detail. But the research moratorium continued and people asked: Well, now what? Is it back to business as usual? Or is there a line that should not be crossed?

The NIH just held a public meeting to discuss whether, and under what conditions, it should fund future experiments that might make this form of bird flu more dangerous.

Officials have drawn up a set of draft criteria for making decisions, and they want to know what people think. They're accepting emailed comments until Jan. 10.

At the same time, government officials are finishing up a review of what kind of lab safety measures should be used when doing this type of work.

Fouchier, for one, says it's still unclear to him how things will go.

"It's critical who is going to do the vetting on this research, who decides what can be done and what cannot be done," Fouchier says. "If you ask infectious disease specialists about what should be done, you're going to get different answers than if you ask security specialists."

Some researchers who don't have to follow the NIH rules may decide to just go ahead with these experiments, despite the lingering uncertainties.

"I suspect that we will be seeing a lifting of the moratorium on the part of people who are not NIH-funded," Dr. Anthony Fauci, who heads the National Institute of Allergy and Infectious Diseases, said after the NIH conference. "They will do that according to their own guidelines of their own funders and the country in which they are doing the research."

And if everything still seems unresolved, that's because this situation is really hard, NIH director Francis Collins said at the end of the recent meeting.

"If this was a circumstance where there was an easy path forward, where you could simply write down in an afternoon how best to handle this, well, we would have done that," Collins said.

He thinks this bird flu situation will hopefully get people better prepared for the next time something in biology raises similar concerns.

"And if we can get this one right, then the hope is, we can go on to some of those other issues undergirded by something more in the way of a foundation than we've previously had," Collins said.

Because if there's one thing that everyone can agree on, it's that the challenge of potentially dangerous information in biology is not going to go away.