Accessibility links
Pete Stark, Health Policy Warrior, Leaves A Long Legacy : Shots - Health News The California congressman lost his seat this fall. Stark has been part of almost every piece of health legislation enacted while he was in office. The 113th Congress will be the first one in 40 years to convene without him as a member. 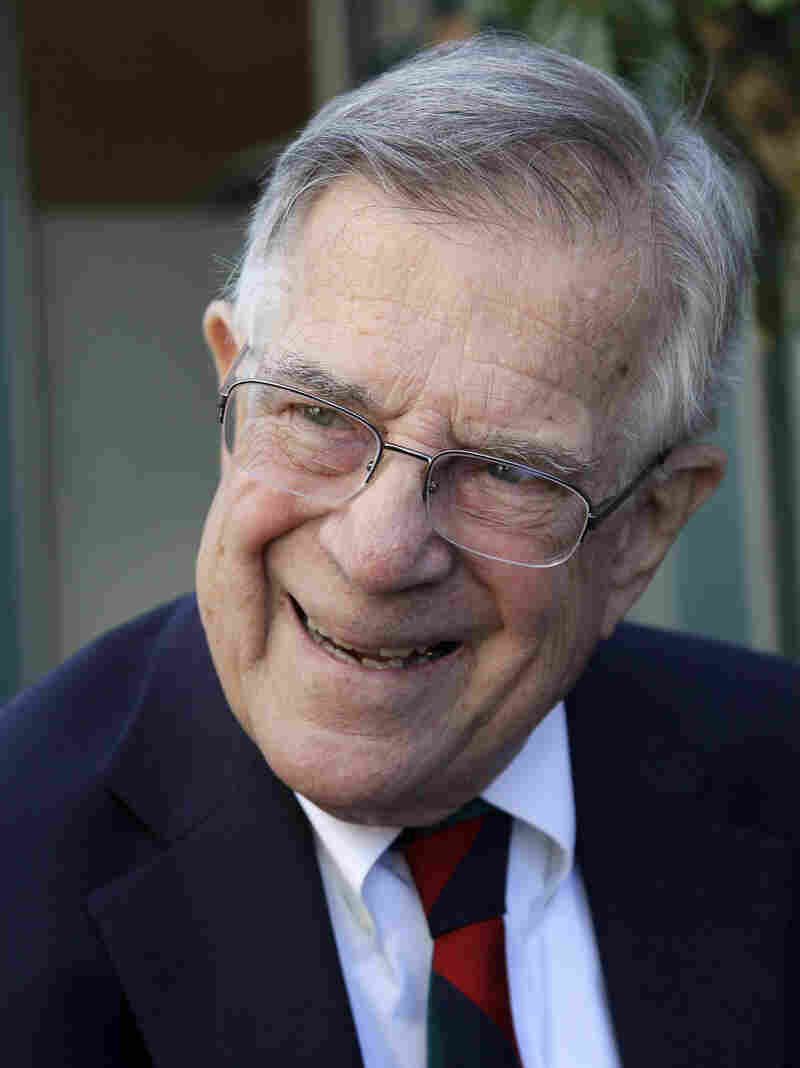 The 113th Congress will be the first one in 40 years to convene without California Rep. Pete Stark as a member.

Stark was defeated in November by a fellow Democrat under new California voting rules. Stark may not be a household name, but he leaves a long-lasting mark on the nation's health care system.

So just how influential has Pete Stark been on health policy in his four decades on Capitol Hill? Very, says John Rother, head of the National Coalition on Health Care.

Stark has "been part of almost every piece of health legislation that's been enacted, including the Affordable Care Act," Rother says. "And many of the changes and improvements in Medicare trace to him as well."

Stark singles out two pieces of legislation of which he's particularly proud.

"I guess in terms of results, COBRA — 40 million people probably have used it. That, and EMTALA. Those two are major changes in the health delivery system," he says.

COBRA is the 1986 law that allows people to remain on their employer's health insurance plan after they leave their job, as long as they pay the full premium. EMTALA is the Emergency Medical Treatment and Active Labor Act. It requires hospitals that participate in Medicare or Medicaid to see and stabilize anyone who shows up in their emergency rooms, regardless of their insurance status.

Fellow California Democratic Rep. Henry Waxman, who has worked with Stark for 38 of the past 40 years, says EMTALA is a much bigger deal than many people realize.

So what exactly made Stark such an effective legislator? It certainly wasn't his public manner. In fact, Stark's mouth has landed him in plenty of trouble.

"Pete's a combination of a person who speaks his mind, sometimes before thinking things through, but who actually does the work," says Rother, "and has got the legislative record to prove it. So while he gets people exasperated with occasional off-the-cuff remarks, when you look at the work that's been produced under his name, it's truly impressive."

Some of the things Stark has had to apologize for include calling former GOP Health and Human Services Secretary Louis Sullivan, who was black, a "disgrace to his race," and suggesting that former Connecticut Republican Rep. Nancy Johnson learned about health via "pillow talk" because her husband was a doctor.

But for all of his partisan jabs, Stark had an almost legendary working relationship with Ohio Rep. Bill Gradison, who was the ranking Republican on the Ways and Means health subcommittee for most of the time Stark was chairman.

"Never once did we report a bill out of that subcommittee that he and I did not both co-sponsor and end up supporting on the floor," said Stark.

Gradison, now teaching at Duke University's Fuqua School of Business, says Stark went out of his way to be cooperative.

"At the beginning of every year, he and I and our senior staffs would sit down and talk about the issues that we anticipated would be coming up in that next year and talk about potential subjects for hearings and potential witnesses, and there was a lot of give and take," says Gradison. "Yes, he had the gavel, and he had the control over what happened, but he was certainly open to suggestions."

But first and foremost, Stark spent most of his career fighting for the Medicare program his subcommittee oversaw.

Not Your Father's (Or Mother's) Congress

"He devoted his career to Medicare, making sure it worked, that beneficiaries were protected," Waxman said. "We got the best we could for the money we were spending, and avoiding spending money that wasn't going to directly help people who are in the Medicare program."

And what will Stark miss most when he leaves Congress?

"It's one of the areas in which you get up ... in the morning and look at the mirror ... and say, 'Hey, I'm going to do something today that's going to make life better for somebody.' And that's pretty neat," Stark says. "When I was a banker I'd get up and say, 'Whose car am I going to repossess?' or 'Whose house am I going to foreclose?' and that didn't start you out on a very nice approach for the rest of the day."

Stark says he hasn't decided what he'll do next, but it will likely involve children. "Children with learning disadvantages need a lot of help today, and it's important to get it early on so they learn to read and calculate," he says.

Whatever it is Stark does, expect him to do it with a lot of gusto.