Accessibility links
After Bringing Cholera To Haiti, U.N. Plans To Get Rid Of It : Shots - Health News On the third anniversary of Haiti's devastating earthquake, the country is laying plans to rid itself of the cholera epidemic that followed in its wake. Most scientists now think Nepalese soldiers unwittingly spread the pathogen in Haiti when they joined a United Nations peacekeeping force. 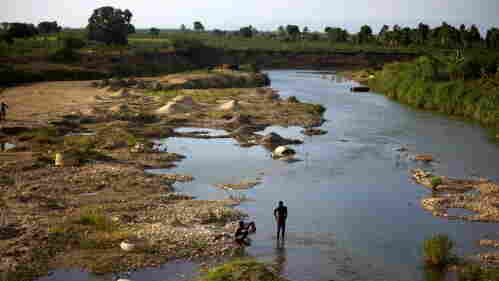 Men bathe in a branch of the Artibonite River outside Saint-Marc. Haiti's cholera outbreak in 2010 began about 60 miles upstream from here. John W. Poole/NPR hide caption

Not quite 10 months after Haiti's devastating 2010 earthquake, a more insidious disaster struck: cholera.

Haiti hadn't seen cholera for at least a century. Then suddenly, the first cases appeared in the central highlands near a camp for United Nations peacekeeping forces.

The disease struck with explosive force. Within two days of the first cases, a hospital 60 miles away was admitting a new cholera patient every 3 1/2 minutes.

"Part of the reason we think the outbreak grew so quickly was the Haitian population had no immunity to cholera," says Daniele Lantagne, an environmental engineer at Tufts University. "Something like when the Europeans brought smallpox to the Americas, and it burned through the native populations." 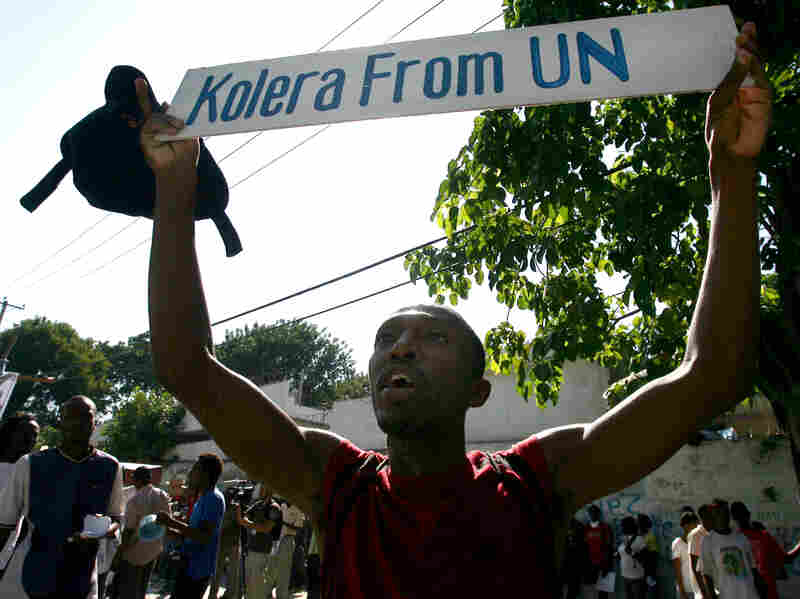 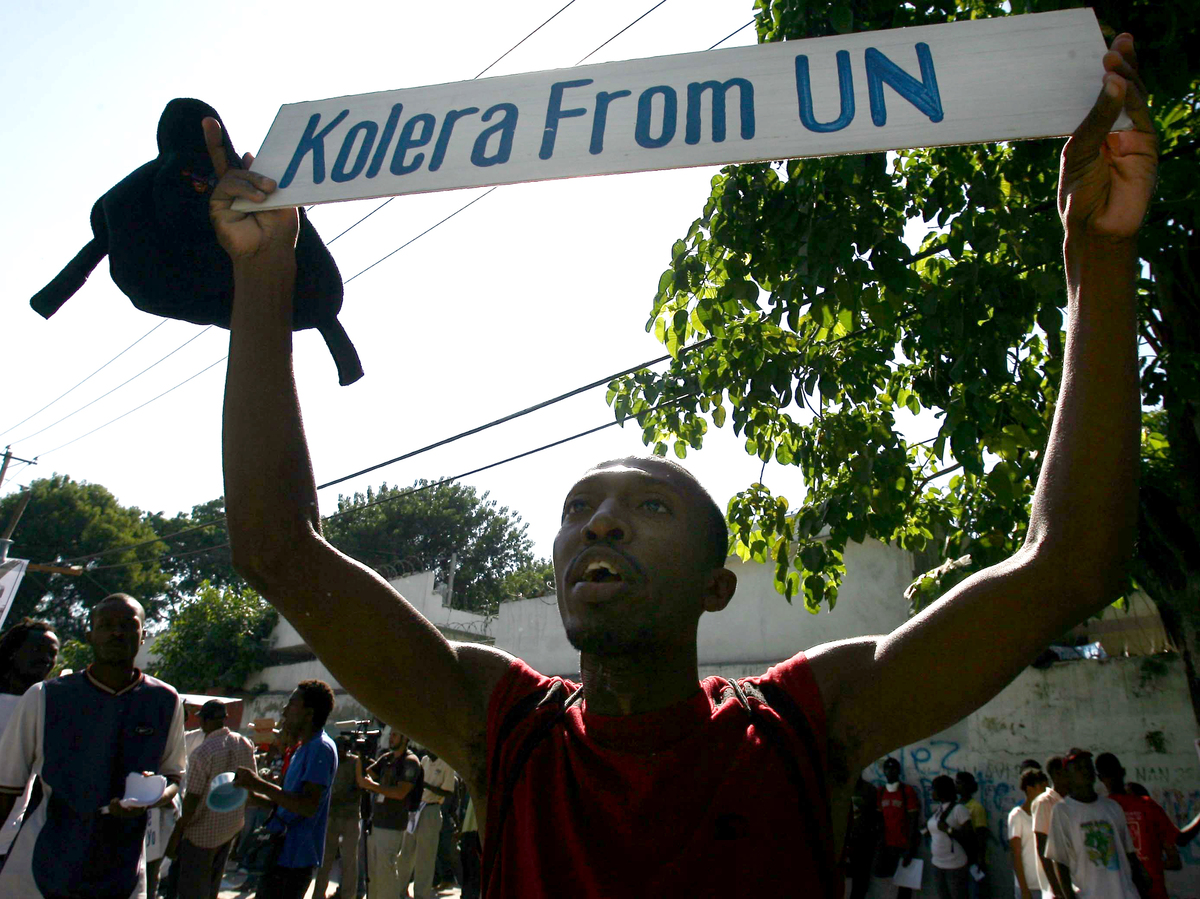 Haitians protest against the United Nations peacekeepers in Port-au-Prince in November 2010.

Lantagne says comparison of the Haitian cholera strain with one circulating in Nepal around the same time shows the two differed in only 1 out of 4 million genetic elements.

"That's considered an exact match, that they're the same strain of cholera," she tells Shots.

Most scientists now think Nepalese soldiers unwittingly brought cholera to Haiti when they joined a U.N. peacekeeping force there in 2010. The outbreak started just downstream from their camp. Sewage from the camp spilled into a nearby river.

Lantagne was one of four scientists appointed by the U.N. to look into the matter. Their report, issued in May 2011, implicated the U.N. camp as a likely origin, but it concluded that the outbreak was caused by "a confluence of circumstances."

She tells Shots that the report would come out different today.

"If we had had the additional scientific evidence that's available now, we definitely would have written the report in 2011 differently, to state the most likely source of introduction was someone associated with the peacekeeping camp," Lantagne says.

That's important because the U.N. insists that whatever way cholera got to Haiti, terrible sanitary conditions and lack of clean water were responsible for its remarkably fast spread.

"It's like lighting a fire in a dry field on a windy day and then blaming the wind or the drought for the fire," says Concannon, who directs a Boston-based group called the Institute for Justice and Democracy in Haiti.

More than a year ago, the group filed a legal claim against the U.N. demanding that it accept responsibility.

Haiti has done some great things with vaccination. They've eliminated measles, rubella and polio, and you can't say that in many countries in Europe.

Concannon says the U.N. is supposed to set up a formal mechanism within the Status of Forces Agreements that govern every peacekeeping operation to deal with claims of harm — from traffic accidents and alleged rapes involving peacekeeping soldiers to larger allegations — but it has never done so.

Since the U.N. has not responded to its claim, Concannon's group is pondering whether to sue the agency in a court in the United States, Europe or Haiti.

For its part, the U.N. hasn't admitted anything. But in December, Secretary-General Ban Ki-moon announced a plan to rid Haiti and the neighboring Dominican Republic of cholera.

"Cholera can certainly be eliminated from Haiti," he tells Shots. "It's been eliminated from the United States, from England, from many countries in South America," he says. "This is basically 19th century technology that needs to be installed in Haiti."

The Haitian government is expected to release a detailed blueprint for the first two years of the effort sometime this month. The entire project is expected to cost $2.2 billion and take at least 10 years.

But so far, the U.N. has identified only 10 percent of the money, most of it redeployed from earlier pledges. Concannon worries the rest may never be found.

Before Sandy Hit U.S., Storm Was A Killer In Haiti

Dr. Jon Andrus acknowledges it's getting harder to raise money for Haiti, as the earthquake fades into history. He's the deputy director of the Pan American Health Organization, an arm of the U.N.

Paying for cholera elimination in Hispaniola is the challenge, Andrus tells Shots. "It's a big challenge," he says. "The question is: Can it be done? I believe it can. So we're ramping up efforts to do that."

But even if the money can be found, it's going to take years to bring clean water and sewage treatment to a sizable proportion of Haiti's 10 million people.

Meanwhile, Haitians will still get cholera and many more will die.

One stopgap under discussion is to vaccinate Haitians at highest risk of cholera, such as the 266,000 babies born every year, and those in remote areas who can't get to clinics rapidly.

Andrus, who has a background in vaccination programs, thinks that's a good idea.

"Haiti has done some great things with vaccination," he says. "They've eliminated measles, rubella and polio, and you can't say that in many countries in Europe. We believe they can do it."

Cholera vaccination is 60 to 70 percent effective and lasts about two years. And of course, it also will take money.

If enough cholera vaccines become available, one recent study suggests that vaccinating around half the population would provide enough "herd immunity" to make cholera transmission much less likely.

But, so far, the U.N. says nothing has been decided about launching a cholera vaccination program of any sort in Haiti.