Accessibility links
Flu Wave Stresses Out Hospitals : Shots - Health News It's still too soon to say whether this is a historically bad flu season. But it's already clear that emergency rooms around the country are filled with feverish throngs that are much larger than during the last flu season. 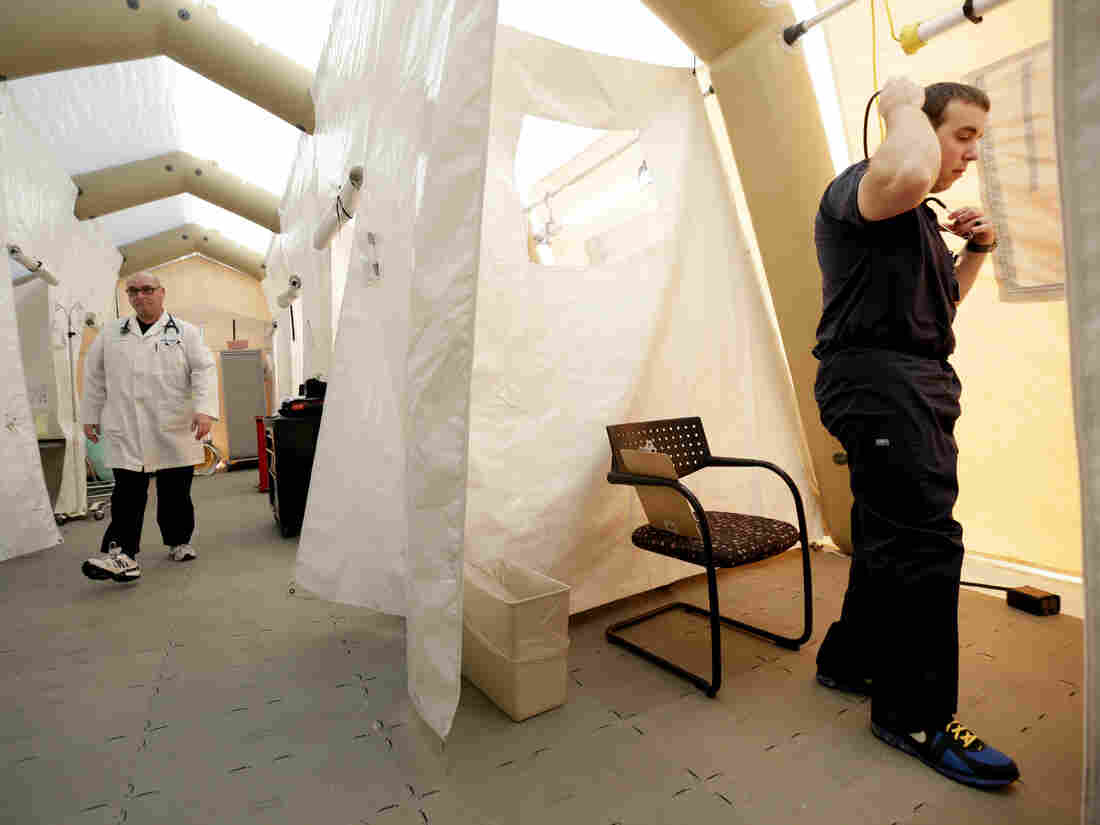 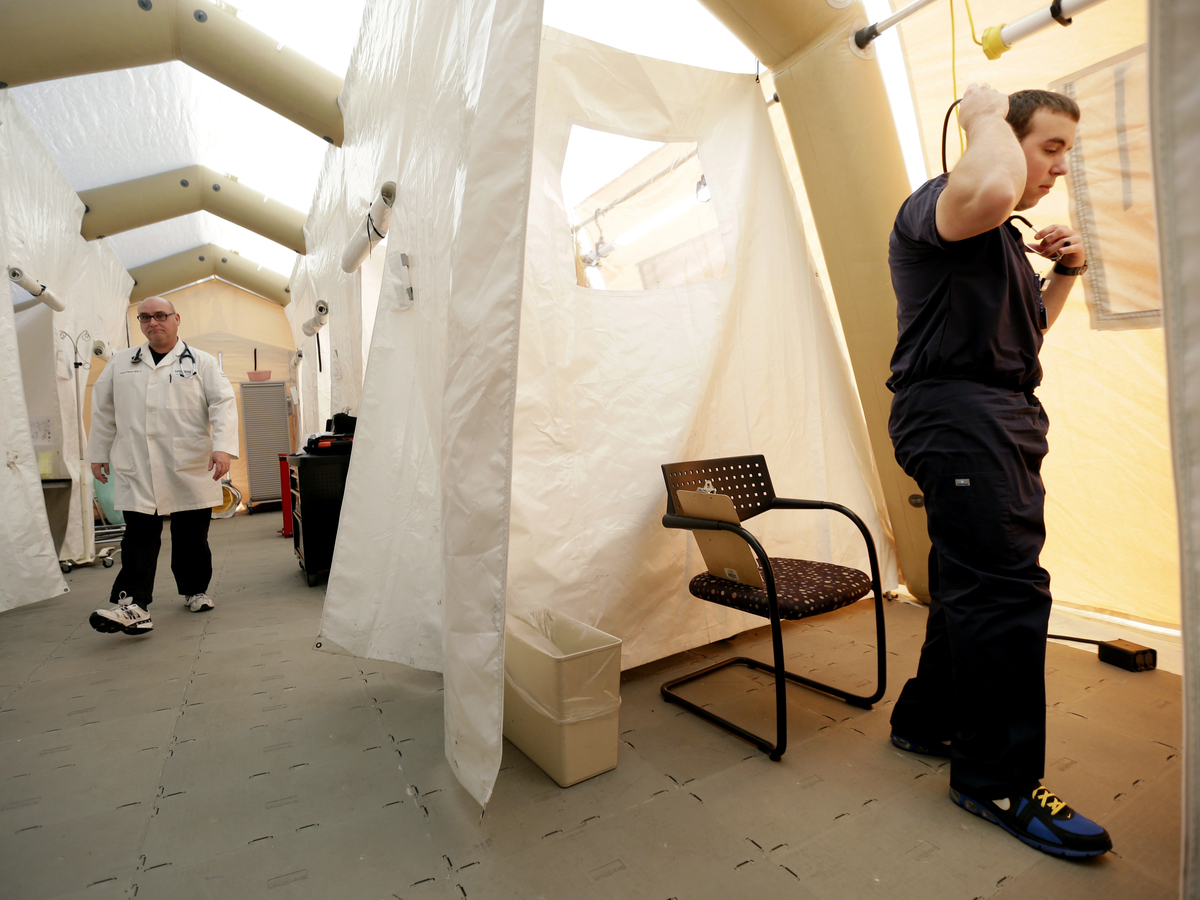 Physician assistants Scott Fillman (left) and Andrew Hunadi get ready to see patients with flu symptoms, in a tent erected just outside the emergency entrance at the Lehigh Valley Hospital in Allentown, Pa.

What does it feel like to be working in an emergency room during this nasty flu season? Monday. Every day feels like Monday, typically the busiest time of week in the ER.

"Now instead of having a Monday peak, it's seven days a week of a Monday," said Dr. Bill Frohna, who runs the emergency department at MedStar Washington Hospital Center in Washington, D.C.

It's still too soon to say whether this is a historically bad flu season. But it's already clear that emergency rooms around the country are filled with a feverish throng that is much larger than the last time around.

Maria McCoy is one of those patients. She had been miserable for more than a week with a fever, aches and vomiting. She'd had her flu shot, so she didn't think it could be the flu. But she kept getting worse.

"I called 911. They brought me straight here," said McCoy, 52, speaking on Thursday from a hospital bed in the ER, where she was, indeed, diagnosed with influenza. "It's really miserable."

McCoy has plenty of company.

"We started to see a lot of activity in the South and in the Southeast in the middle of November and toward the end of November, which was about a month earlier than what we normally see," said Tom Skinner, a spokesman with the Centers for Disease Control and Prevention. "And since that time, activity really has picked up across the country to where most states are seeing either moderate to severe activity."

According to the CDC, more than 112 million Americans have been vaccinated against flu this season. The vaccine is about 60 percent effective, which is a decent percentage for a flu vaccine. But that means some people who get immunized, like McCoy, will still get the flu. (To find a place offering the vaccine near you, check out this site.)

This year's strain of the flu, H3N2, is particularly virulent, Frohna said. He compared the surge in patients with those in other years.

"Usually there's a week or two ramp up, a peak, and then a week or two downturn," Frohna said. "So far, we've been basically on a ramp up for about five weeks, and I'm not sure if we've seen the peak yet."

According to Frohna, more patients are being admitted to the hospital because their symptoms are so serious. "We've got patients wearing masks, we've got providers wearing masks to protect themselves and each other from the flu," he said.

To cope, he's opened a half-dozen extra hospital beds, made sure patients with flu symptoms are isolated as quickly as possible, and ordered extra supplies like IV poles. He's also beefed up staffing of doctors and nurses.

Dr. Andrew Sama, president of the American College of Emergency Physicians, says this is exactly the sort of situation that ERs train for.

"There are emergency preparedness plans that occur in every hospital," said Sama, whose organization is a trade group for emergency department doctors. "Even with all the excellent planning, you become constrained because of space and technology and personnel."

In Allentown, Pa., one hospital had to put up a tent outside the ER to manage all the patients. New York state and the city of Boston have declared public health emergencies.

In Washington, Frohna is eyeing the calendar and hoping that things start getting better soon.

"With inauguration coming, I'd just be tickled pink if the flu was on the downturn when a million visitors come to town," he said. "It's causing me to lose sleep already."