Accessibility links
Skin Doctors Question Accuracy Of Apps For Cancer Risk : Shots - Health News Smartphone apps that assess moles for skin cancer risk missed threatening moles one-third of the time, say dermatologists who tested some of the apps. The apps could give people a false sense of security about their skin. 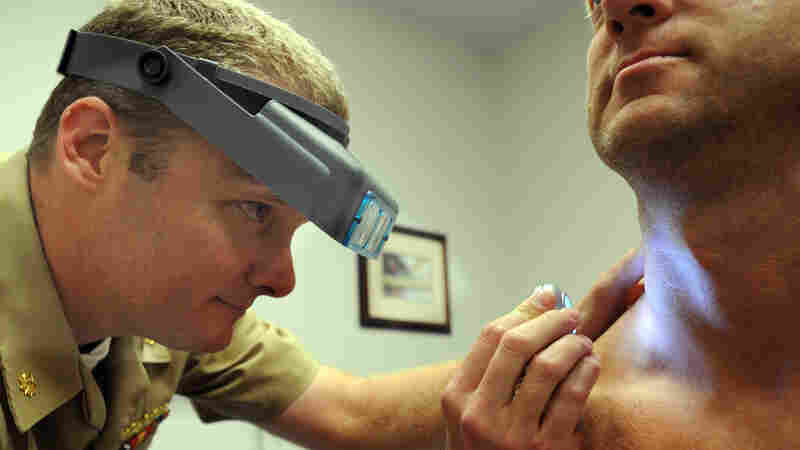 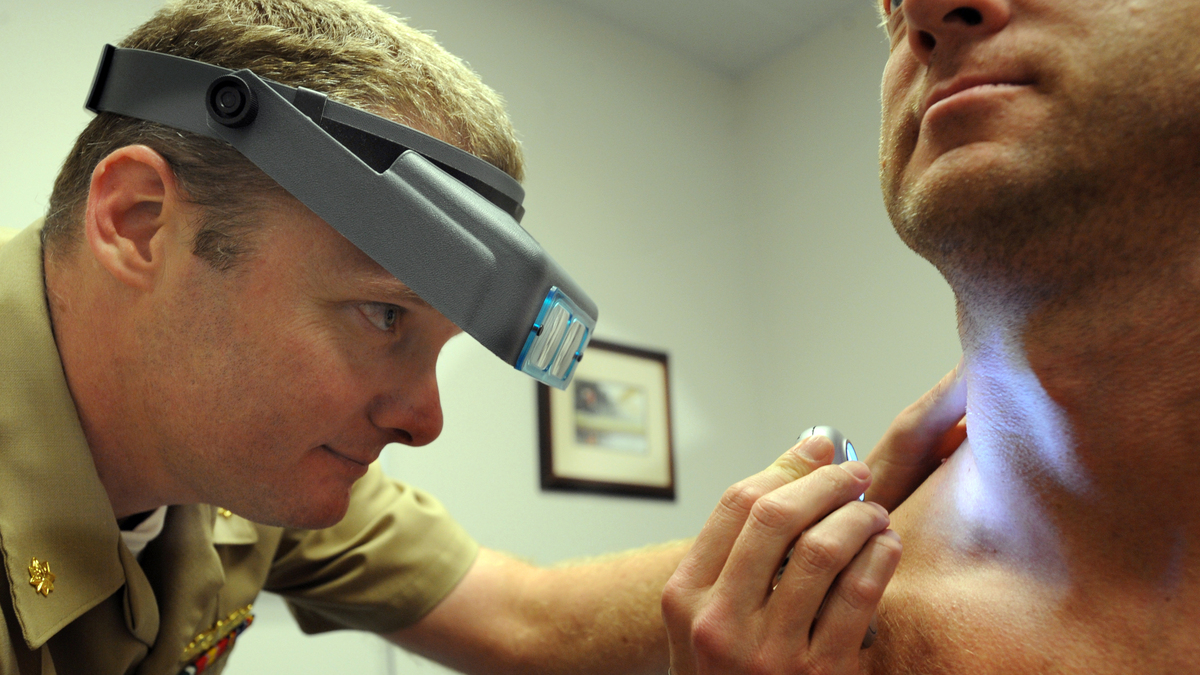 Lt. Cmdr. Stephen Mannino checks a sailor for skin cancer the old-fashioned way during a screening exam at Naval Amphibious Base Coronado in San Diego.

Skin cancer? There's an app for that.

But the same smartphone that brings you Fruit Ninja might not be the best tool for diagnosing deadly melanoma.

Smartphone apps that evaluate moles for skin cancer risk missed threatening moles one-third of the time, according to a study by dermatologists at the University of Pittsburgh Medical Center.

Those apps let users photograph a funky mole or other skin lesion. Then the apps use mathematical formulas to look for asymmetry, irregular border, varied color, or a diameter larger than a pencil eraser. Those are the same things a dermatologist scans for during a checkup, and the things we're all supposed to be checking ourselves.

But for those of us who aren't skin docs, knowing when that asymmetry is no big deal, or which color change demands a panicked call for an appointment can be a challenge, even with the help of scary photos showing us how to self-screen for melanoma. Surely an app could help with the anxiety, right?

"It seems so appealing," says Laura Ferris, a dermatologist and co-author of the study, which was published online in JAMA Dermatology. "Unfortunately, our data suggest that maybe these apps aren't quite there."

Ferris and her colleagues used photos of 188 moles, 60 of which were confirmed as melanoma, to test four find-the-skin-cancer apps: three that do instant in-phone diagnosis, and one that ships the mole mug shots to a real live dermatologist for review.

"One app would pick up a certain melanoma, and it would be missed by another," Ferris tells Shots. And it wasn't like they were going out of their way to stump the app. "These are melanomas that I could show to an untrained person and they'd go, 'That looks bad.' "

Ferris and crew didn't name the apps they tested. But a quick run through the iTunes store finds three that use algorithms to analyze moles for skin cancer risk. All carry disclaimers that say that they aren't offering a diagnosis or replacing medical advice.

The company behind SkinVision had its two staff dermatologists review about 4,000 images taken with the mobile app, and also tested it on about 500 patients, according to CEO Roel van Summeren. That app analysis was accurate 70 percent of the time, he says. The firm is now working on a study with an academic medical center to compare the app with dermatologists' analysis and pathology reports.

But these sorts of screening tools could give people a false sense of security, Ferris says. "Melanoma is a very time-sensitive diagnosis," she says. Melanoma caught early is curable, she says. But a lesion can grow deeper and spread to other organs within a matter of months. "We don't have good treatment for late-stage melanoma," she adds. Apps, she says, are "not good enough to trust your life with."

The Food and Drug Administration is grappling with how to regulate medical apps. The agency said back in 2011 that it might start regulating those that could turn a phone into a medical device, but so far there's no definitive action on that front. For now, app users are pretty much on their own in figuring out whether a medical app is worth the download.

Ferris suggests sticking with skin cancer apps that just make the self-check process a little easier. Some will send reminders that it's time to take a look. Others help organize and store photos of moles, so that the mole's owner can watch for changes, then go to a dermatologist.

Just one example is UMSkinCheck, a free app from the University of Michigan. The app helps track moles over time, sends self-exam reminders, and also provides a template for photos that should make it a little bit easier to play paparazzi with those random spots.