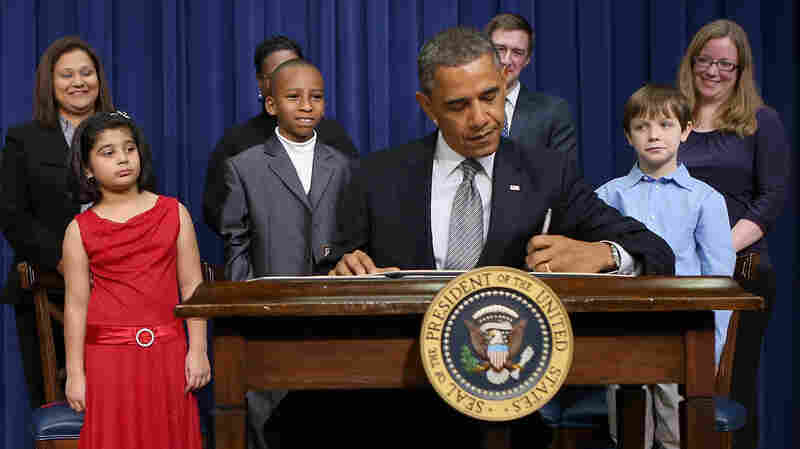 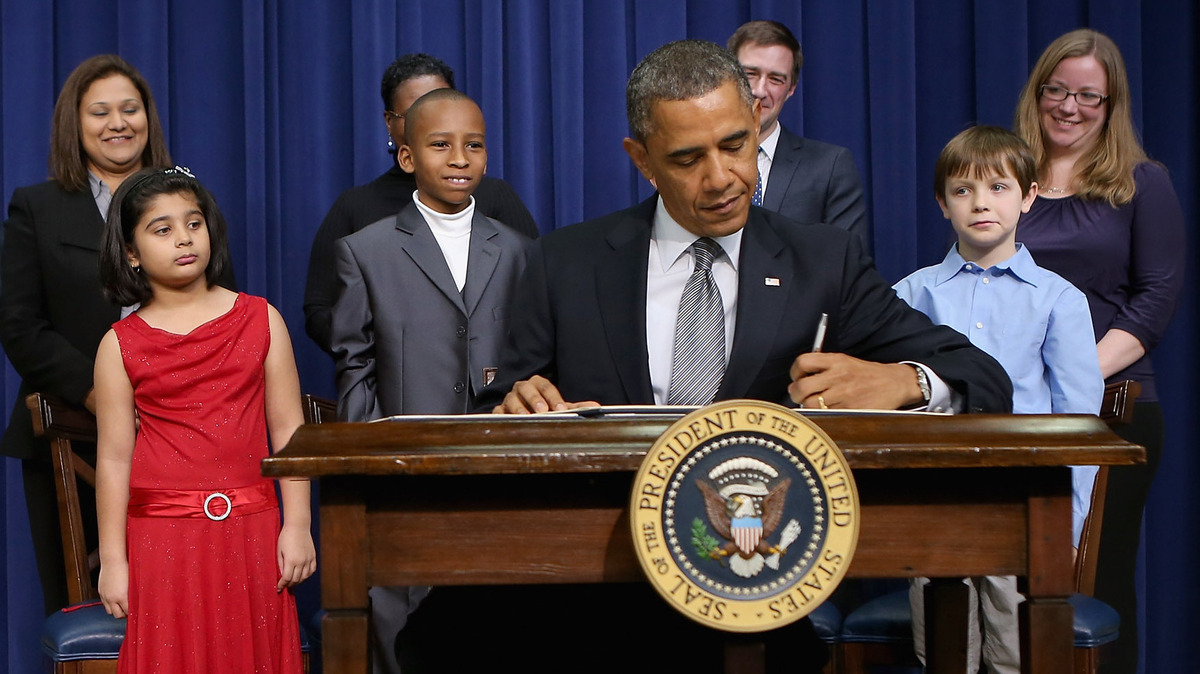 President Obama signs a series of executive orders Wednesday about the administration's gun law proposals as Vice President Biden and children who wrote letters to the White House about gun violence look on.

If the National Rifle Association's plan to curb violence was, in part, arming school employees with guns, President Obama wants to arm them with something quite different: mental health training.

The president's plan centers largely on training teachers and others who work with children, teens and young adults to recognize mental illness as it's developing.

"I think this is really putting the focus on children's mental health as child issue," says Dr. Paramjit Joshi, the president-elect of the American Academy of Child & Adolescent Psychiatry. She notes that "about 50 percent of lifetime mental illness starts before the age of 14."

Joshi says 3 of 4 people with mental illness develop their condition — including bipolar disorder, depression and schizophrenia — by young adulthood, when the intricate structures of the brain are taking shape. But fewer than half receive treatment.

The president has called for a new initiative, which would need congressional approval, that would provide mental health first-aid training for teachers. It would also set up a robust referral system for children with mental health and behavioral problems.

Mike Fitzpatrick, executive director of the National Alliance on Mental Illness, says that training is critical. "People say, 'Oh, we saw the signs,' but no one knows what the next steps are," he says. "And that includes families and caregivers and teachers and resource officers. So to go into the communities and offer training on what to look for, how to spot the signs of mental illness and where do you go to get assistance — this, in many ways, would be a game changer."

Obama's proposal also points out that a startling number of children have direct experience with gun violence: 22 percent of 14- to 17-year-olds in the U.S. have witnessed a shooting in their lifetimes, and the plan calls on Congress to direct some $25 million to help traumatized students.

A separate initiative would bolster support for older teens and young adults — ages 16 to 25 — in need of help who can get lost in the tumble of college or a first job.

But mental health specialists say that while it's critical to recognize the first signs of mental illness, it's just as important that children and their families have health insurance that guarantees them coverage for treatment.

That problem was supposed to be addressed, in part, in 2008, when then-President George W. Bush signed the Mental Health Parity and Addiction Equity Act. The law requires employers with more than 50 workers to offer mental health coverage that is on par with medical benefits. But writing the regulations has proved difficult. There has been disagreement, for example, over a lifetime cap on the number of therapy visits for people with depression.

In the meantime, advocates say people with mental illness have languished under temporary rules that have barred patients from a full range of mental health services. That's set to change now. One of the executive actions the president signed Wednesday included a vow to issue final rules sometime in February.

Chuck Ingoglia, of the trade group National Council for Community Behavioral Healthcare, says the rules will apply to nearly every type of insurance, from Medicaid to employer coverage to individual health plans sold under the Affordable Care Act. Among the so-called essential benefits will be mental health care.

"We're hoping a final rule on parity will make it very clear about the scope of services that are offered," he says. "The whole intent of the parity law was that if you need mental health and addiction services, that it should be available to you."

Those rules won't require congressional approval, but much of the president's plan to improve mental health services — and his other gun-related proposals — will hinge on support from House Republicans. They have vociferously opposed the administration's health policies, especially implementing and funding the 2010 federal health law.

Still, the National Rifle Association and a number of Republicans have said they support addressing the nation's fractured mental health system. Advocates for the mentally ill say they anticipate far less political resistance.

And the package of mental health proposals in the president's plan totals some $155 million in federal spending — million, with an M. And the modest scale, those advocates say, might just be something everyone can agree on.