Accessibility links
Scientists Try To Thwart Flu Virus By Resetting Its Clock : Shots - Health News Flu viruses hijack the machinery inside animal cells to replicate. The theft is a complicated process that takes time. If the virus leaves the cells too early or too late, the risk of infection falls. 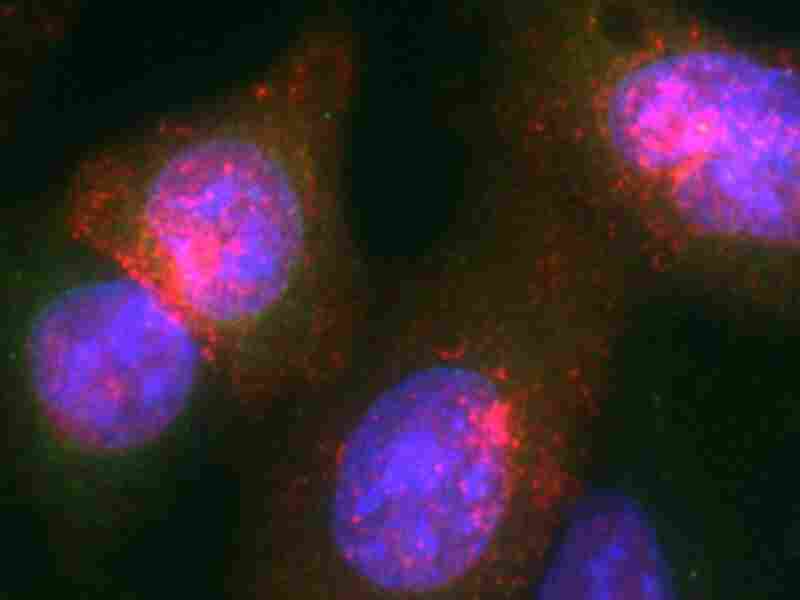 When flu viruses (in red) accumulate an escape protein too quickly, they exit the cell nucleus (in blue) before they've made enough viral copies to spread the infection. Benjamin tenOever hide caption 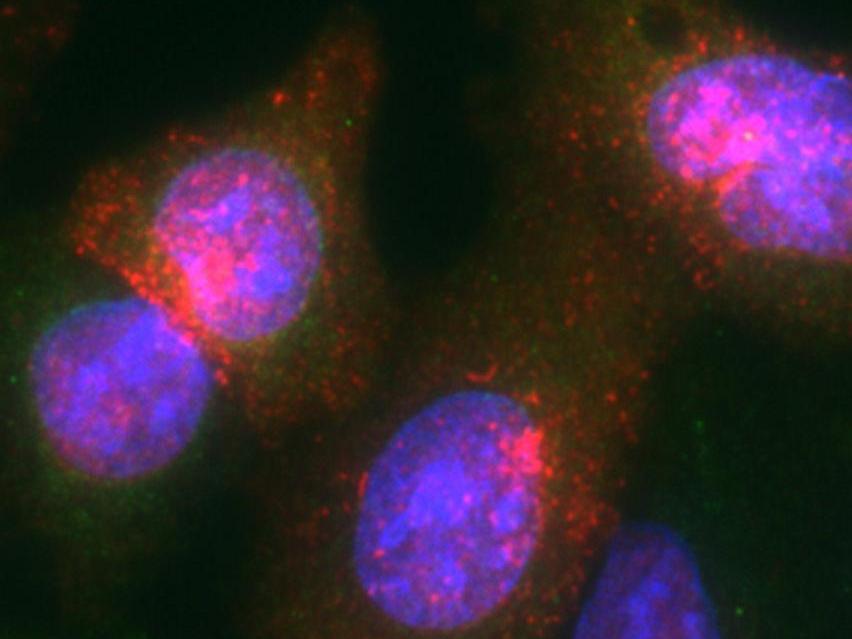 When flu viruses (in red) accumulate an escape protein too quickly, they exit the cell nucleus (in blue) before they've made enough viral copies to spread the infection.

Flu viruses can tell time. Sort of. And the viral clock-watching could provide a new way to fight the flu.

A study in Cell Reports describes how researchers tapped into the flu's internal clock as they search for ways to keep the virus from spreading.

Flu viruses hijack the machinery inside host cells to replicate. The theft is a complicated process that takes time. A virus enters the nucleus of the cell, copies itself thousands of times and then breaks out before the immune system attacks. Every minute counts.

"I like to equate it to a bank robber who knows that no matter what he does, he's going to set off some alarm," says Benjamin tenOever, a virologist at Mount Sinai School of Medicine who led the research. "In anticipation of that, he times what the police response is to get from the station to the bank."

While replicating, the virus directs the cell to produce a protein that the virus needs to exit. The protein level serves as a kind of hourglass for the flu. After about eight hours in the cell, the virus has enough to skedaddle and leaves.

TenOever hopes that this understanding of how viruses keep track of time will aid in creating more effective antiviral drugs and flu vaccines, though nothing like that is likely to materialize anytime soon. "If you could simply look for small molecules that interact with this protein, you would essentially cause the virus to live in the cells too long, which would give our immune systems enough time to catch it red-handed," he says.

And inoculating people with a defective virus that can't keep track of the time, tenOever says, "would allow even those who perhaps didn't have the same immune system strength of a 2- to 49-year-old to receive it because you're lowering the capacity of the virus to cause disease."