Accessibility links
A Worm's Ovary Cells Become A Flu Vaccine Machine : Shots - Health News The Food and Drug Administration just approved a flu vaccine made by cells taken from the fall armyworm, an agricultural pest. The cells produce copies of a piece of the flu virus's outer coat that primes the immune system. Conventional vaccines use the whole virus and take longer to produce. 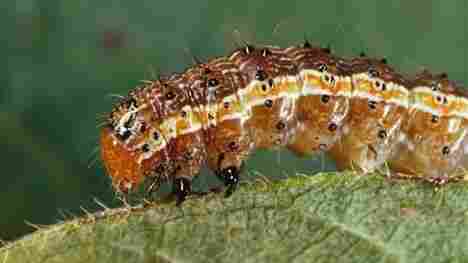 As the flu season grinds on from news cycle to news cycle, there's some flu news of a different sort. Federal regulators have approved a next-generation type of flu vaccine for the second time in two months.

The two new vaccines are the first fruits of a big government push to hasten and simplify the laborious production of flu vaccines.

But alas, there's no firm evidence that either the newfangled flu vaccine approved last November, called Flucelvax, or the even newerfangled one the Food and Drug Administration greenlighted this week, called Flublok, will be any more effective in preventing flu than ordinary vaccines.

This season's conventional flu vaccine prevents illness 62 percent of the time among people who get it — certainly better odds than no vaccination, but not great. Protection is even poorer among people over 65, whose immune systems are weaker.

Flucelvax was the first approved flu vaccine to be made in cell culture rather than eggs. In Flucelvax's case, the cells come from dog kidneys.

Flublok uses cells taken from the ovaries of fall armyworms in the pupal stage to crank out its active ingredient — a piece of the flu virus's outer coat. Conventional vaccines use the whole virus.

The advantage of this technology, the FDA says, is that it "offers the potential for faster start-up of the vaccine manufacturing process."

That's because the new vaccines don't require eggs to grow up its active ingredient.

For decades, flu vaccines have been made this way:

The Flublok manufacturing process starts with the gene for hemagglutinin, the protein that flu viruses carry on their coat and use to get inside human cells. Hemagglutinin, or HA, is one of the shape-shifting proteins that require flu vaccine makers to tweak their product every year.

Once Flubok's maker isolates the HA gene from an emergent virus, scientists insert it into another virus that infects only insects. Then they use this recombinant virus to infect billions of cells derived from the fall armyworm, a well-studied agricultural pest. The infected worm cells obligingly churn out quantities of the desired HA protein, which the manufacturer then purifies for insertion into that season's vaccine.

"Once you have the genetic code of HA, within 21 days you can be in production," Manon Cox of Protein Sciences, Flublok's developer, tells Shots. That's roughly three months faster than a conventional flu vaccine, she says.

The FDA says in studies involving 2,300 people, Flublok was 44.6 percent effective against "all circulating influenza strains" in that season, not just the particular strains against which the vaccine was matched.

Cox says no data are available yet on how well Flublok does against flu strains against which it is specifically targeted. The new vaccine costs around $30 a dose, somewhat above conventional vaccines.

But flu guru Michael Osterholm says the vaunted "matchiness" yardstick might not matter. He's director of the Center for Infectious Disease Research and Policy at the University of Minnesota.

Osterholm notes federal health officials' claim that the current seasonal flu vaccine is an especially good match with the circulating viruses – yet its effectiveness is not significantly better than usual.

"A match doesn't tell us how well a vaccine is going to work," Osterholm tells Shots. "It's almost meaningless."

He says what's needed is a "game-changing vaccine" that protects against the flu 80 or 90 percent of the time. That's scientifically feasible, he maintains, but it will take a billion dollars or more to develop and bring to market.

Meanwhile, it's "probably safe to say" that the new cell-culture vaccines are "no more effective than the current vaccines."

Flulok's fast turnaround time is "absolutely a good thing," Osterholm says. "It's better to have more of this vaccine faster when we really need it. But is it a sea-change? Absolutely not. It's incremental at best."