Accessibility links
Growing Pains As Doctors' Offices Adopt Electronic Records : Shots - Health News Millions of dollars have been spent to digitize medical records. But doctors are only slowly adopting the the new systems, and many systems won't talk to each other. Some now wonder when the promised benefits in care and cost savings will arrive. 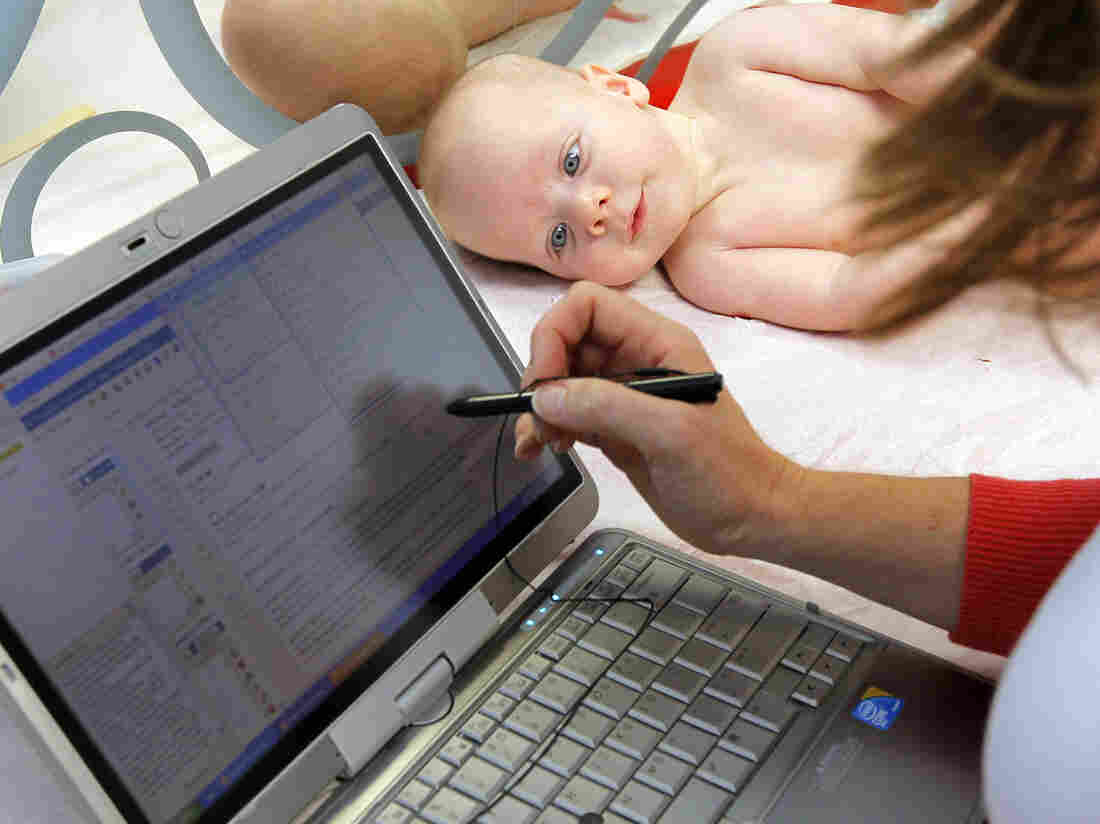 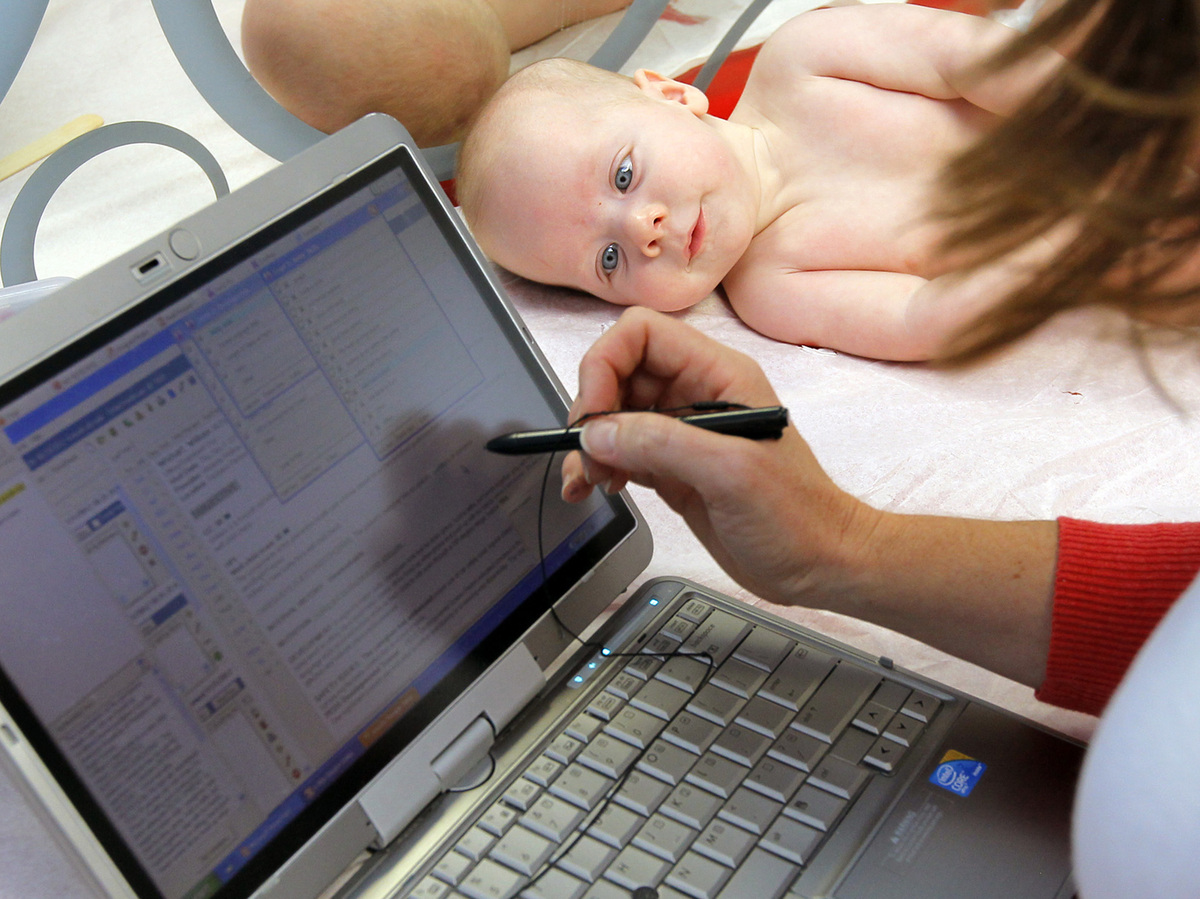 Patient William Wishart, age 4 months, looks on as Dr. Melanie Walker uses a portable computer to enter information from his exam into an electronic medical records system, in North Raleigh, N.C., in November.

Information technology has transformed much of the American economy, but its use in health care still lags, especially when it comes to electronic medical records.

Here's an example: The state of Colorado runs a computerized registry where any provider who gives a child a vaccine can report that information. The system should help kids stay current with their immunizations.

But the state's computer system isn't compatible with most of the ones doctors use, so many practices don't update the central database because it's just too much extra data entry, says Dr. Allison Kempe, director of the Children's Outcomes Research Program at the University of Colorado School of Medicine. That means doctors and researchers like her, who try to keep kids' immunizations on track, can't rely on it to make sure a vaccine isn't missed or given twice.

This is just one instance of the digital disconnect that's holding health care back, says Dr. Art Kellermann, a policy analyst with the Rand Corp. He says the ability for doctors to easily share information is the exception in the U.S., not the rule.

Kellermann co-authored an article in this month's Health Affairs, reflecting on a study from 2005 that said information technology could save America $81 billion a year by making health care more efficient. He found actual savings have been scant and that many doctors complain electronic records make them less efficient.

The result is that the health care industry isn't benefiting from the computer networks that have transformed other industries, such as manufacturing, retail and banking.

"You can take your ATM card and go to any ATM in the country" to withdraw money or transfer funds among accounts, Kellermann notes. "You can't do that with health information technology today."

According to a survey from the Centers for Disease Control and Prevention, while 72 percent of office-based physicians use some sort of electronic system in their practice, only 40 percent of practices meet the definition of even a "basic" system.

"People talk about the ATM, [but] that's seven data elements, and they charge you $2.50 for shipping those seven data fields over. We're talking thousands of data fields around things that are life and death," says Farzad Mostashari, the national coordinator for health information technology at the Department of Health and Human Services. His office is charged with leading American medicine's digital transformation.

That office meets constantly with software vendors — on average, one meeting every 3 1/2 hours for the past three years, Mostashari claims — trying to hammer out the industry standards necessary to make health information as easy to share as bank records or other commercial data.

The number of doctors and hospitals using electronic records has doubled in the past two years, Mostashari says, thanks in part to federal stimulus money for doctors who adopted electronic records. He admits there are growing pains but says the government's strategy is helping, though it will need six more years before it can show significant savings.

Both he and Kellermann agree that patients would get better care, at lower cost, if health care systems could share patient records easily. But that won't happen until doctors and hospitals start getting paid for being smart about IT. Right now, duplicative testing also means duplicative payments.

But Kellermann is optimistic the Affordable Care Act's payment reforms can change that.

"As we shift American health care and start paying for the best quality care and the best outcomes, rather than who does the most stuff, who orders the most tests or who does the most operations, then I think you'll see IT becoming a tool for efficiency and high performance," Kellermann says.