Accessibility links
Old Drug Extends Life For Pancreatic Cancer Patients : Shots - Health News A study of a new drug therapy for pancreatic cancer finds it works better than the standard approach. While the improvement is modest for the typical patient, some people who received the treatment lived a year or two longer than those receiving conventional therapy. 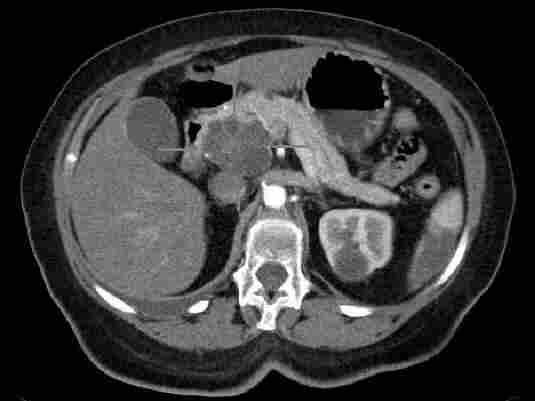 A large study is providing a rare glimmer of hope for patients with pancreatic cancer, perhaps the deadliest of all malignancies.

By the time they're diagnosed, most patients with pancreatic cancer have advanced disease that's spread to the liver and lung. And the primary tumor may be inoperable because it's wrapped around vital blood vessels and nerves.

A two-drug combination extends life for such patients compared to standard chemotherapy. Not by much — a couple of months for the average patient.

Perhaps more meaningful for most patients, more of those who got the new regimen lived a year or two longer than those on conventional therapy.

"There's a chance to make it to two years and as we follow patients, some may make it to three years," study author Dr. Daniel Von Hoff tells Shots. "Everybody knows it's not enough of a chance. But the message here is there is something that can get you out that far. And hopefully, other breakthroughs will come that have an impact on survival."

Von Hoff, who's with the Translational Genomics Research Institute in Phoenix and the Virginia G. Piper Cancer Center in Scottsdale, will present the results on Friday at a meeting of the American Society of Clinical Oncology devoted to gastrointestinal cancers.

The latest study employed Abraxane, an albumin-coated variation of the old drug known as Taxol. The idea is that the pancreas tumor cells "see" the albumin protein as food and ingest it, concentrating the chemotherapy where it's needed.

The latest study, involving nearly 900 patients, gave half Abraxane in combination with gemcitabine, the standard chemotherapy for pancreatic cancer. The others got gemcitabine alone. The study was funded by Celgene, which makes Abraxane.

The patients who had Abraxane added to their treatment did better.

"I wouldn't call it a giant step, but it's a significant step, for sure," Dr. David Ryan of the Massachusetts General Hospital tells Shots. "Every single patient in the clinic will be asking about it — and there are a lot of people out there with pancreatic cancer."

Ryan, who wasn't involved in the new study, says it's the second such advance in the past 20 months. In mid-2011, a French group showed that a four-drug regimen called FOLFIRINOX gave pancreatic cancer patients an extra four months of life compared to those who got gemcitabine alone.

But that came at the cost of more side effects than the latest two-drug combination. And FOLFIRINOX is harder to administer, requiring an infusion pump over several days.

The two-drug combo can be given by standard IV infusions. It has side effects, too, including a reduction in white blood cells, fatigue and nerve damage.

Ryan says Abraxane plus gemcitabine will probably become a first-line treatment for advanced pancreatic cancer. The cost of Abraxane would be about $38,000 a patient, estimates Mark Schoenebaum, a drug industry analyst with ISI Group.

Von Hoff, the new study's leader, says the next step is to see if the two-drug therapy can shrink pancreas tumors enough to remove them surgically. A study of these patients is underway.

Another big question, the Arizona specialist says, is whether Abraxane plus gemcitabine can prevent recurrence of pancreatic cancer in patients who've had their primary tumor removed.

And eventually, researchers would like to see if use of the two-drug treatment in early-stage pancreatic cancer can prevent or greatly delay metastasis to other organs. The limitation of that strategy, though, is that only about 20 percent of pancreatic cancer patients are diagnosed when the disease is still confined to the pancreas.