Accessibility links
FDA Advisers Favor Limits On Vicodin : Shots - Health News Painkillers containing the drug hydrocodone have provided relief to many in pain. But a panel recommended the federal government place restrictions on access to the drugs to lessen the odds of addiction. 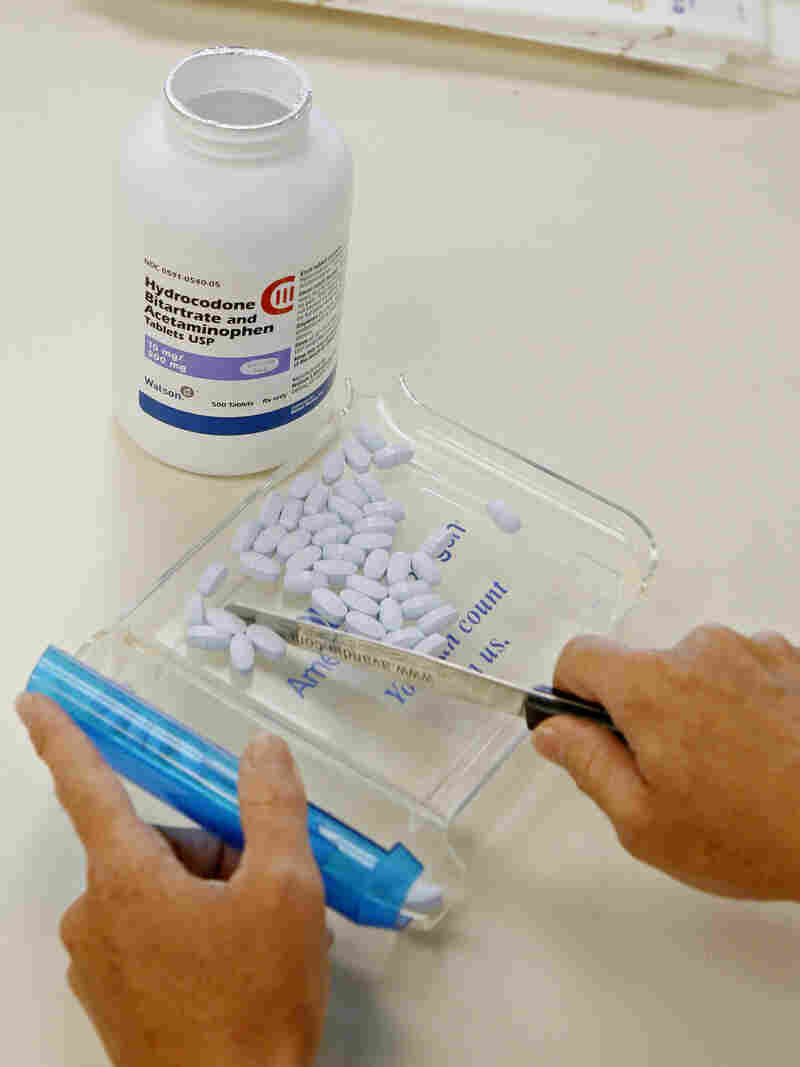 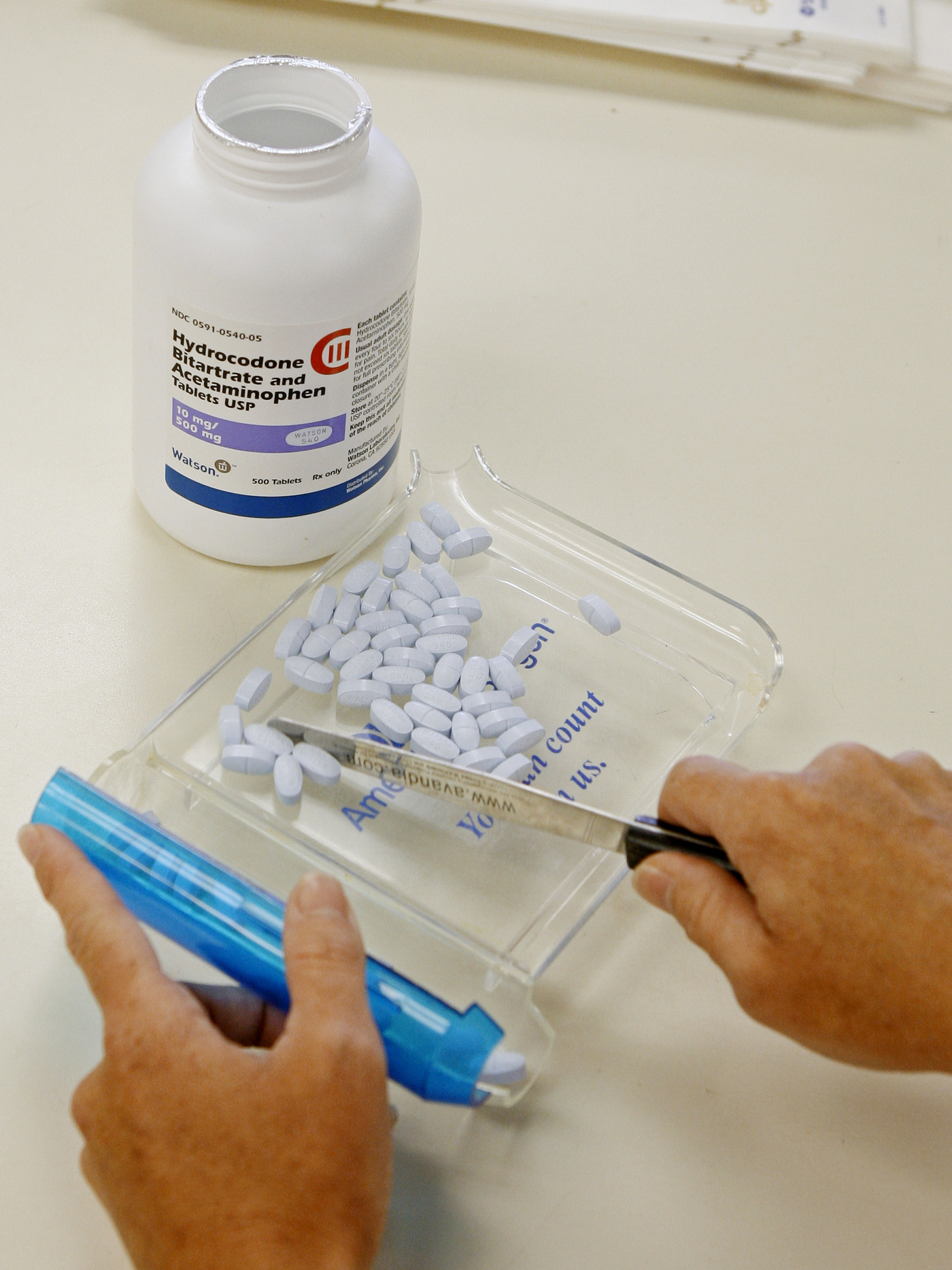 An FDA advisory panel voted to increase controls on painkillers containing hydrocodone, such as this generic version of Vicodin.

At the conclusion of an emotional two-day hearing, the Food and Drug Administration advisory committee voted 19-10 to recommend the agency change how drugs that contain the opioid hydrocodone are classified as controlled substances.

If the agency goes along with the panel's recommendation, which is typical but not required, the drugs would be more stringently regulated, moving to so-called Schedule II from Schedule III.

The change would impose a variety of new restrictions on the drugs. For example, doctors could only write prescriptions for 30-day supplies and could no longer call in new prescriptions without patients coming back to the office. In addition, nurse practitioners and physician assistants in some states would no longer be able to prescribe them.

The vote was praised by those seeking new restrictions. "I believe that this change will mark a turning point in the epidemic," said Dr. Andrew Kolodny of the Maimonides Medical Center in Brooklyn, N.Y. "It will lead to less people becoming addicted, which is the most important thing that needs to happen to bring this crisis under control."

But pain specialists expressed concern about the effect of new restrictions on patients struggling with debilitating pain. "If the FDA agrees with the advisory committee, the decision will have far-reaching impact on access and cost to pain care," said Dr. Lynn Webster, president-elect of the American Academy of Pain Medicine. "I hope people in pain won't suffer as a result."

Top officials at the FDA will now consider the vote in making a recommendation to the Department of Health and Human Services, and the agency isn't saying when that might happen. In 2008, the FDA rejected a similar request.

"We will pay close attention to everything we've heard as we proceed," the FDA's Douglas Throckmorton told the panel at the conclusion of the hearing.

Drugs containing hydrocodone are at the center of an emotional debate that pits the needs of pain patients against efforts to fight widespread abuse of these and other opioid painkillers.

More than 136 million prescriptions for these products are dispensed every year, making them the most widely used prescription drugs. Vicodin is probably the best-known hydrocodone medicine, but there are many others, sold under brand names such as Lortab and Norco.

The request for the change came from the Drug Enforcement Agency, which, along with others, argues these drugs are just as addicting and abused as frequently as other powerful opioids such as Oxycontin and Percocet, which are Schedule II drugs.

While powerful painkillers, opioids are highly addictive and are abused by millions. The number of Americans overdosing from these drugs has been increasing rapidly in recent years, and more than 15,000 now die every year, according to the Centers for Disease Control and Prevention.

But about 100 million Americans suffer from chronic pain, and many of them and their doctors fear the change would make it difficult, if not impossible, for these patients to get drugs they need.

The concern is that many people, such as the elderly and those living in rural areas, won't be able to make the extra trips to the doctor to get new prescriptions, or afford additional visits. Doctors worried about getting into trouble with the DEA may also stop prescribing the drugs, and insurance companies may stop paying for them.

In addition to testimony from DEA and FDA officials and from pain and addiction specialists, the committee heard from several parents whose children died from overdoses after becoming addicted to hydrocodone products. Many of them broke down in tears or expressed anger at the widespread availability of the drugs.

"They are highly addicting. My son is proof," said Cheryl Placek of Niagra Falls, N.Y., who sobbed as she described how her 28-year-old son Daniel committed suicide after becoming addicted to hydrocodone he received for back pain.

"All he did is follow his doctor's instructions," she said. "In the end, the drug took his life. We look for medicine to get us better, not kill. The addiction to hydrocodone stole my son's life and destroyed his family."

The committee also heard from several patients suffering from chronic, debilitating pain. They pleaded with the committee not to impose new restrictions.

Shani Weber of Mount Airy, Md., said she depends on the drugs for managing pain from Ehlers-Danlos syndrome, which among other things causes her joints to suddenly dislocate, triggering intense pain. She described one incident that occurred last week.

"I awoke with a pain level so high I was struggling to breathe," Weber said. It was all I could do to not fall into a fetal position screaming.... I was extremely thankful for access to hydrocodone."

In addition to the DEA request, some doctors and addiction specialists want the FDA to change the labels on all opioids, including drugs such as Oxycontin and Percocet. They want the labels to say they should only be prescribed for severe pain, at much lower doses and for no more than 90 days.

The goal is to get drug companies to stop marketing these drugs as aggressively and get doctors to be much more cautious about prescribing them. The FDA's has scheduled another hearing on that request next month.

The initial version of this post incorrectly said that changing the classification of Vicodin would mean that physician assistants and nurse practitioners could no longer prescribe the drug. Because state laws vary, that would be true in some states but not all.