Accessibility links
Why Prostate Cancer Screening Is So Tricky : Shots - Health News Testing for prostate cancer may not get any less confusing anytime soon. But researchers say the much-maligned PSA screening test is worthwhile if it's used for the right men at the right time. 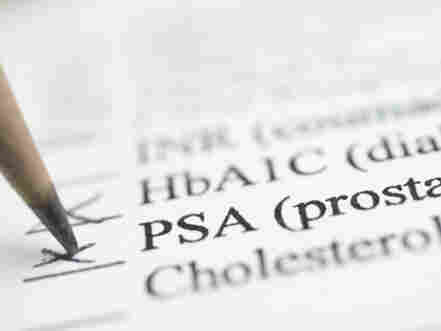 When is the right time to check the PSA box? iStockphoto.com hide caption

Men can be forgiven for being confused over screening for prostate cancer. Doctors are confused, too.

When it comes to figuring out if the benefits are worth the risks, the simplest solutions may not be best, a study of the options finds.

Last spring, the U.S. Preventive Services Task Force said that the test most commonly used to check for prostate cancer, the PSA test, is so unreliable it shouldn't be used for routine screening.

That was followed by a study in the New England Journal of Medicine that found that as many as two-thirds of men who had been diagnosed with prostate cancer are at low risk, and would be better off avoiding treatment altogether, especially since the treatment often leaves men incontinent, impotent, or both.

So skip the PSA, right?

That's too simple an answer, says biostatistician Ruth Etzioni, an author of the latest study, published in Annals of Internal Medicine. Instead, she says, it's better to look at prostate cancer screening "in its full, complicated glory, and say, 'There are so many ways to do this.' "

Her team, at the Fred Hutchinson Cancer Research Center in Seattle, was trying to weigh when it makes sense to screen, and how. So they ran computer models on 35 different variations in prostate cancer screening, shuffling ages to stop and start screening, PSA levels, screening frequency, and other variables.

They found that doing PSA tests less often in men at low risk of prostate cancer would substantially reduce the harm of overtreatment, while increasing the risk of death only slightly. Setting a higher threshold for PSA levels for older men would accomplish the same thing.

Here are the numbers: Screening men ages 50 to 74 with low PSA levels every other year instead of annually would increase the lifetime death risk by 0.1 percent, from 2.15 percent to 2.23 percent, the study found.

At the same time, it would reduce number of PSA tests by 59 percent, and false positives, which often lead to painful biopsies, by almost half.

In older men, screening up to age 74, but recommending biopsies only in men with PSA levels in the top 5 percent for their age, increased the probability of lives saved more than it increased overdiagnoses.

The PSA test has been unfairly vilified, Etzioni thinks, and can be useful when it's used right. "It's often cast as this is a bad screening test, and it's not; it's really the screening endeavor." Screening for cancer, whether with PSA tests for prostate cancer or mammograms for breast cancer, is an expensive way prevent deaths from cancer, she says. That's because screening requires that a large group of people gets tested, even though a very small percentage of men will die of prostate cancer if not screened.

This study has quite a few limitations. It didn't look at family history and race, or at gradations in disease stage. It also didn't measure quality of life issues that can be huge in prostate cancer treatment, including incontinence and impotence after surgery. "We didn't want to add uncertainty to the outcomes," Etzioni told Shots.

Still, this study is the sort of sophisticated thinking that needs to be done about cancer screening, says Gilbert Welch, a professor of medicine at Dartmouth University who studies cancer screening. "There's a tradeoff between trying to find every last case, and dragging everyone else through the mud — and hurting them along the way. The idea that you have one rule for screening, that everybody gets screened at the same rate using the same threshold for the same period of time, doesn't make sense."

So this latest data bite doesn't give a simple yes or no. Instead, it suggests that prostate cancer screening will move to a more tailored approach, matched to a man's age and cancer risk.

Men should have a realistic idea of the danger of dying from prostate cancer, Etzioni says. "It's 3 percent." If they're still worried, she says, "they can use this to reduce the likelihood of adverse outcomes."