Accessibility links
Silica Rule Changes Delayed While Workers Face Health Risks : Shots - Health News Regulations to restrict the amount of silica dust that workers can inhale were set decades ago, and workplace safety experts say that limit needs to be cut in half. A proposal for new rules was sent to the White House Office of Management and Budget for a 90-day review, but almost two years later, it's still under review. 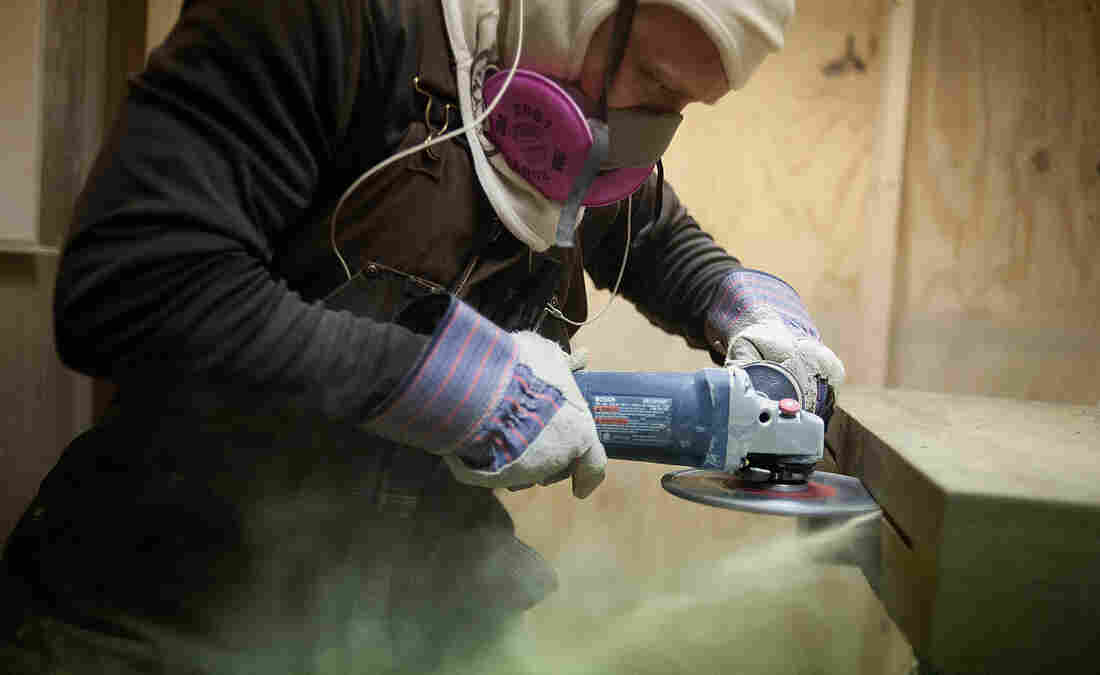 A worker makes a cut in the side of a sandstone block at the Cleveland Quarries facility in Vermilion, Ohio, earlier this month. The legal limit on the amount of silica that workers can inhale was set decades ago. Ty Wright/Bloomberg via Getty Images hide caption 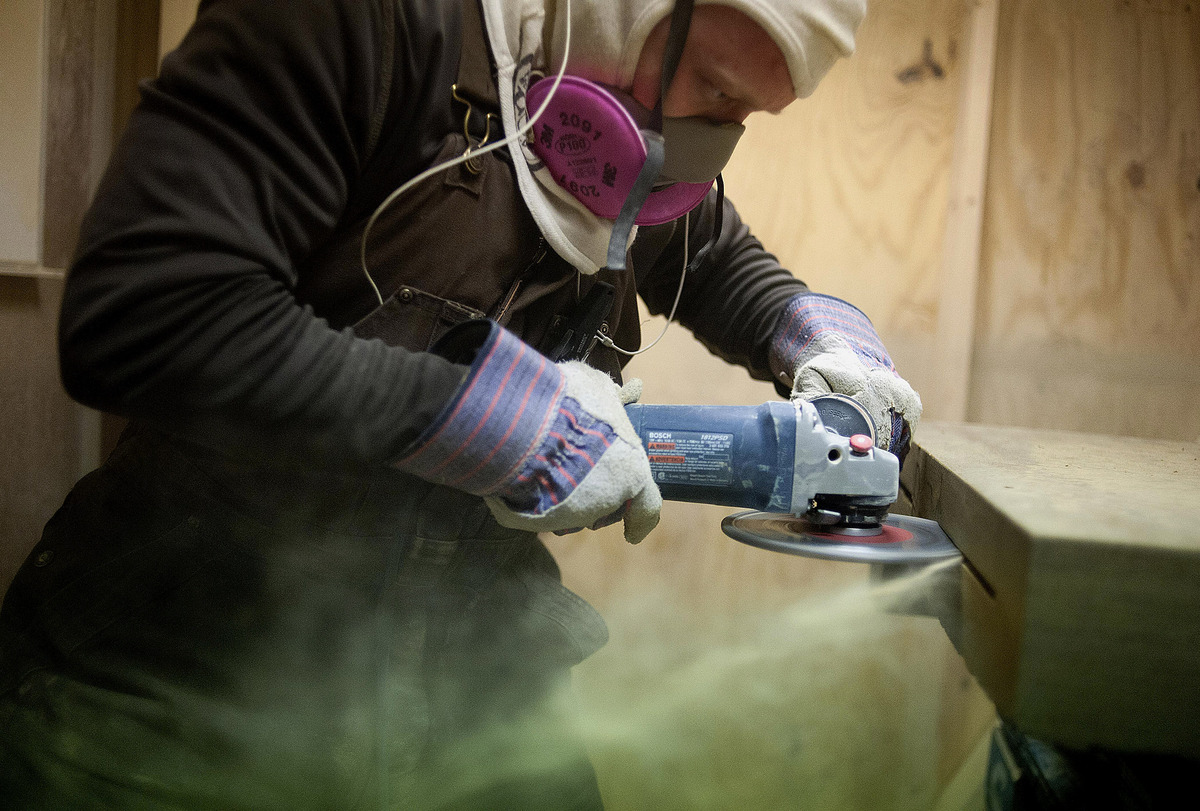 A worker makes a cut in the side of a sandstone block at the Cleveland Quarries facility in Vermilion, Ohio, earlier this month. The legal limit on the amount of silica that workers can inhale was set decades ago.

One of the oldest known workplace dangers is breathing in tiny bits of silica, which is basically sand. Even the ancient Greeks knew that stone cutters got sick from breathing in dust. And today, nearly 2 million American workers are exposed to silica dust in jobs ranging from construction to manufacturing.

The legal limit on how much silica workers can inhale was set decades ago. Workplace safety experts say that limit needs to be cut in half — because otherwise, workers face an increased risk of lung cancer, silicosis and other diseases.

And on Valentine's Day in 2011, it looked like a safety agency at the Department of Labor was getting ready to do that. The Occupational Safety and Health Administration (OSHA) sent a proposal for new silica rules to the White House Office of Management and Budget (OMB). The proposal was supposed to get a 90-day review. But almost two years later, it's still under review.

"There has been incredible delay, inexcusable delay, on protecting workers against silica exposures," says Peg Seminario, director of safety and health for the AFL-CIO, a group of 57 unions that represents more than 12 million workers. She says the push for a new silica rule goes way back.

"We had hoped back under the Bush administration it would move, and it didn't. And then we certainly hoped under the Obama administration that a silica standard would move forward," says Seminario. "Unfortunately, it's been stuck over at OMB and the White House now for two years."

The government's own estimates show the impact of waiting, she says.

"Every year this rule is delayed, another 60 workers will die," says Seminario. "That's deaths. That's not to even look at the numbers of workers who will become sick. We still have thousands of new cases of silicosis every year in this country."

Tom Ward, a 44-year-old mason who lives and works in Michigan, knows just how bad silicosis is. When he was a kid, his dad developed silicosis, after working as a sandblaster. Ward remembers his father coming home one day and collapsing.

"The last day he worked he came in and fell down and pretty much, you know, fell apart basically, and said, 'I can't do it no more,' " says Ward.

This video, produced by the U.S. Department of Labor in an attempt to prevent the occupational disease of silicosis, shows the dangers of exposure to silica dust. It includes the tragic (if not contrived) story of John Steele, "a typical American worker," who was regularly exposed to silica.

His father got the official diagnosis of silicosis at age 34 and died at age 39. "So we watched him slowly suffocate for five years," says Ward.

When Ward grew up and started working as a bricklayer and a mason, he had no idea that the saws and grinders he used were spewing out dust that could expose him to silica — until one day, he took a safety course. "When they went over the respiratory protection is when it really sunk in," recalls Ward. "From that point on, my view on how we cut things at work changed dramatically, to say the least."

He now wonders if he'll develop lung disease. And he worries about the apprentices he teaches at a training center for the International Union of Bricklayers and Allied Craftworkers. He says at construction sites, you can see clouds of dust, but workers aren't going to speak up.

That's why he wants to see the government take action on silica — to release the proposed rules so they can be publicly debated and then, hopefully, finalized. Last year, he went with other worker advocates to talk with officials at the White House OMB, which is doing the review.

They're not the only ones making their case to officials there. A lot of people don't want to see silica exposure limits cut in half.

Opponents to the new rule include trade associations for the makers of brick, steel and concrete, as well as the producers of sand, stone and gravel. There's also opposition from construction industry groups, like road builders and general contractors.

"The rule would cost manufacturers and the industry as a whole billions of dollars a year that is just not sustainable for manufacturing when employers are looking to hire and create new opportunities for job creation," says Amanda Wood, director of labor and employment policy at the National Association of Manufacturers.

In addition, she points out that silicosis deaths have already dropped more than 90 percent, compared wih decades ago. "So based on these two factors, we do not believe that the rule is necessary," says Wood. 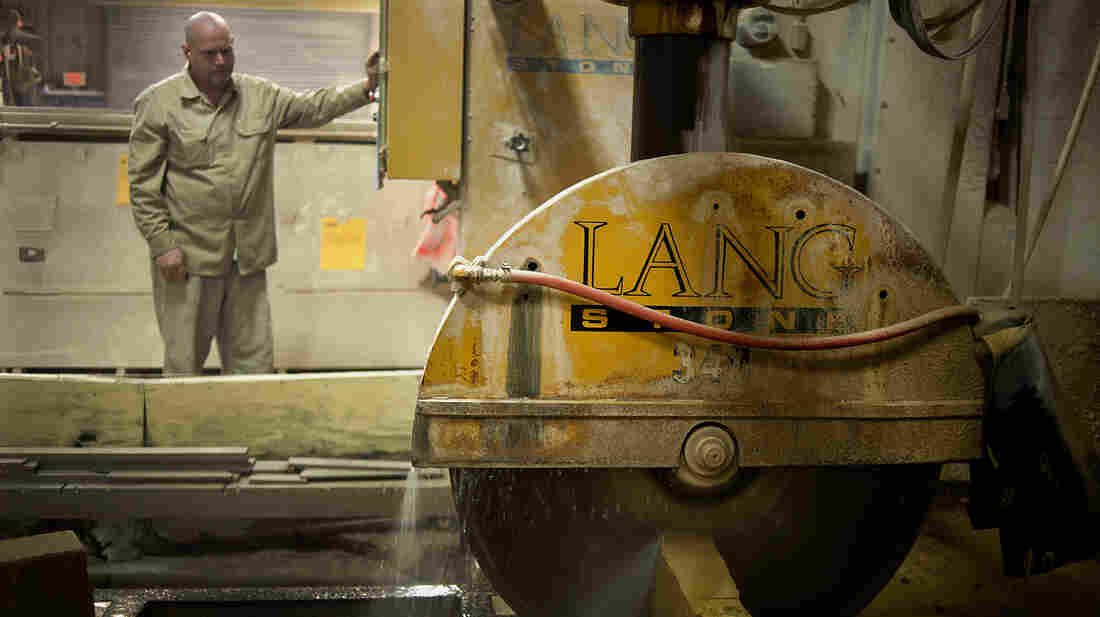 An employee uses a wet saw to cut a slab of sandstone at a Lang Stone Co. facility in Columbus, Ohio, in January. Using water while cutting helps keep dust out of the air. Ty Wright/Bloomberg via Getty Images hide caption

Marc Freedman, executive director of labor law policy at the U.S. Chamber of Commerce, also opposes OSHA's effort on silica: "I think this is an issue that is not appropriate for revision."

And while some have protested the lengthy OMB review, Freedman says it serves as an important check.

"To the extent that there's this final review that makes sure that OSHA has satisfied the requirements they have to satisfy, that's a very valuable step in the process," he says, noting that "once a proposed rule is published, that very much casts the die in terms of what a final rule can look like."

He and others argue that instead of issuing a new rule, the government should better enforce the existing one.

Inspections that check for silica frequently find employers that are breaking the law, says Brian Turmail, a spokesperson for the Associated General Contractors of America.

"They're finding that firms aren't complying with the current limit about a third of a time," says Turmail. "We're going to get a lot more improvement in workplace safety if we just can work together to make it so that everyone can comply with the current standard than we're ever going to get out of changing the standard to a new and even more unattainable level.

"I think we all want to achieve the same thing, which is a safer workplace," says Turmail, who notes that the employers in his association care about their workers' health. "Our concern is that OSHA's approach isn't going to be effective."

But the guy who runs the Department of Labor's safety agency, OSHA, doesn't buy the arguments from industry.

David Michaels, an epidemiologist who serves as director of OSHA, says the current silica standard is not good enough.

"Even if 100 percent of employers kept exposures at the current standard, silica-exposed workers would still be at increased risk for lung cancer, silicosis and chronic obstructive lung disease," says Michaels.

Exposures have dropped compared with the "terrible" exposures decades ago, says Michaels, "but still there are plenty of people exposed to dangerous levels, and we can't ignore that."

And he says the changes his agency wants will not result in lost jobs. "There will be people who will say that our proposal will hurt employment in the United States, and that's simply not true," says Michaels. "We've looked at the industry analyses, and they're wrong."

"Look, I sympathize with those advocates," says Michaels. "The process that the law requires us to go through is a very long and complicated one."

He explains that OSHA has to do extensive studies to show that every industry can comply with the proposed rules without hurting their bottom lines.

"And that's what we've been doing. We've now finished that process," says Michaels. "And we're confident that our proposal meets these requirements."

He expects the proposal to be made public this spring. A spokesperson for OMB said it does not comment on rules under review.