Accessibility links
Despite Rocky Economy, Money For Global Health Remains Solid : Shots - Health News Money to fight HIV and tuberculosis worldwide went through a huge growth in the early 2000s. But donations have plateaued in the past few years, economists say, as governments tighten their budgets. The U.S. is still the biggest contributor to global health, giving about $10 billion in 2010. 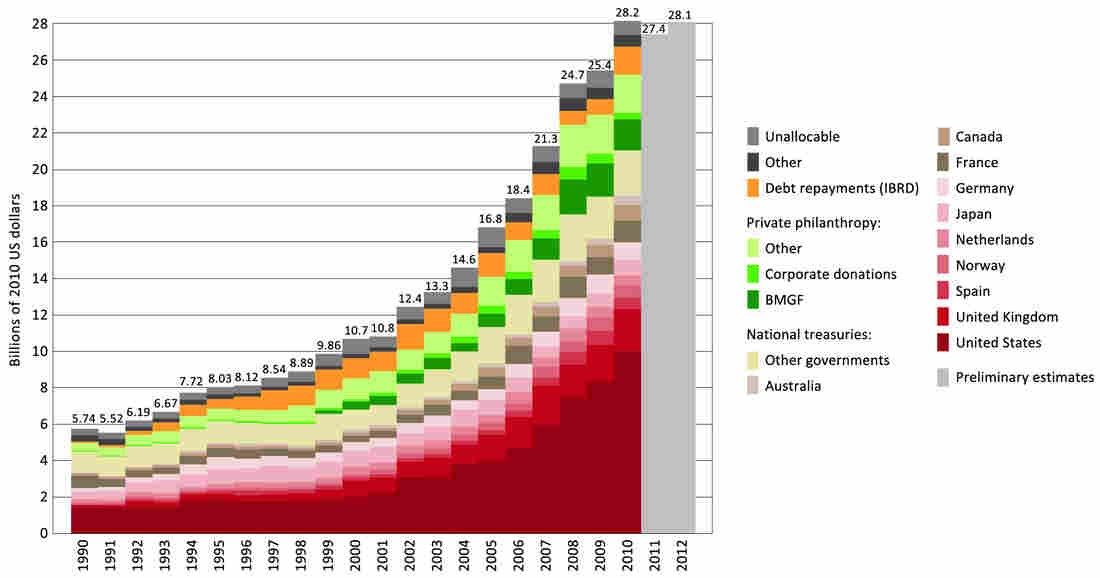 After going through a huge growth spurt, money for global health has plateaued recently. The U.S. government remains the biggest donor, but private charities like the Bill & Melinda Gates Foundation have boosted donations. Courtesy of the Institute for Health Metrics and Evaluation hide caption

toggle caption
Courtesy of the Institute for Health Metrics and Evaluation 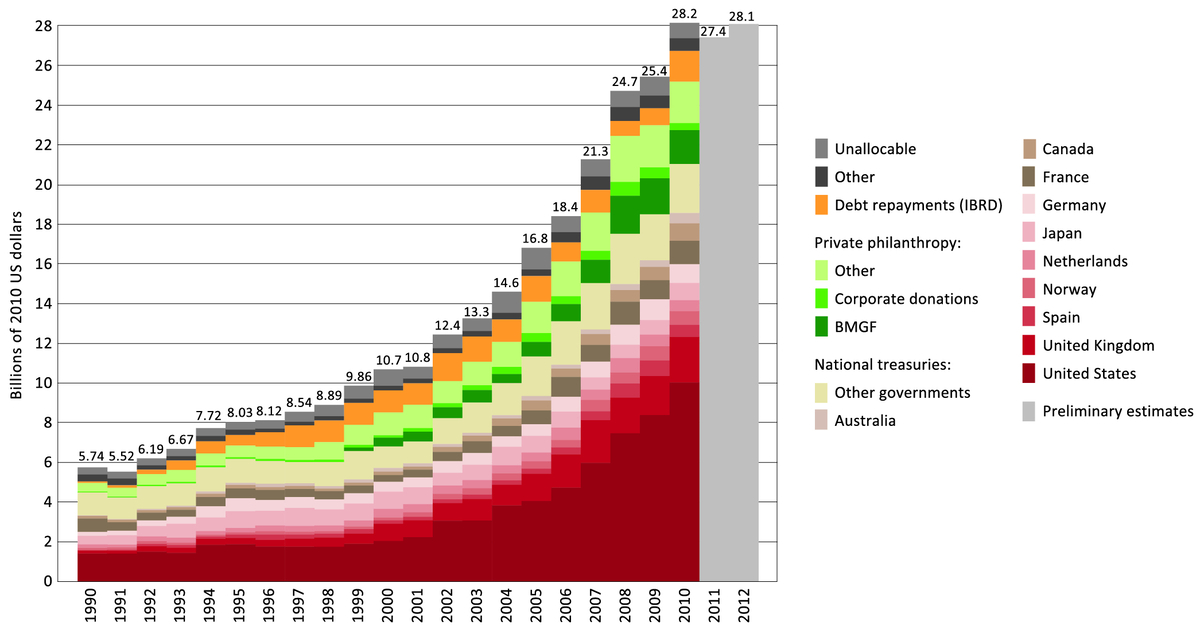 After going through a huge growth spurt, money for global health has plateaued recently. The U.S. government remains the biggest donor, but private charities like the Bill & Melinda Gates Foundation have boosted donations.

Courtesy of the Institute for Health Metrics and Evaluation

Given the world's economic troubles, you'd probably expect money to fight HIV and other illnesses around the world to have plummeted in the past few years.

But foreign aid for global health held steady in 2011 and 2012, hovering right around $28 billion a year, a report published Wednesday finds.

Just to put this number in perspective, that's about 3 percent of what the U.S. spends on defense each year.

The study, lead by the Institute for Health Metrics and Evaluation at the University of Washington, finds that total donations for global health increased dramatically from 2001 to 2010. Funding nearly tripled over the decade, as the world's wealthiest countries, banks and philanthropists steadily increased spending to fight HIV, tuberculosis, malaria and infant mortality.

But in the past three years, funding has plateaued.

"From 2001 to 2010, there was a rising tide that lifted all the ships," Michael Hanlon, an IHME economist, said at a meeting in Washington, D.C. "Now that golden age of 10 to 11 percent increases each year appears to be over. The trend is broken."

The U.S. government is by far the biggest contributor to global health. In 2010, it gave $10 billion. A big chunk of it went to treat HIV and AIDS around the world.

The second largest donor is the U.K., who gave $2.3 billion in 2010. Norway topped the list of money spent per capita.

Although it's too early to say exactly how much money countries donated to global health in 2011 and 2012, preliminary estimates suggest it was a mixed bag. Germany, Australia and the U.K. beefed up donations. Japan, Canada and France shrank their budgets.

To help fill in this gap, private charities and international agencies, such as the World Bank, increased their funding in 2011 and 2012, the report says. The Bill & Melinda Gates Foundation, a supporter of NPR, gave nearly $900 million in foreign aid in 2012.

So where does all the money go?

About half of it is split between fighting HIV around the world and helping pregnant women and their newborns.

Most of the rest goes toward malaria, tuberculosis and general support of health care systems.

What about cancer and diabetes, which are on the rise in many developing countries? They're not getting their due. "For all intents and purposes, there is really not funding for noncommunicable diseases," Hanlon said.