Accessibility links
World's Most Popular Painkiller Raises Heart Attack Risk : Shots - Health News Diclofenac — sold under the brand names Voltaren, Cambia, Cataflam and Zipsor — raises the risk of a heart attack by about 40 percent. But that hasn't prevented the drug from becoming the world's most popular painkiller in its class. Now researchers are calling on the World Health Organization to remove it from a list of so-called "essential medicines." 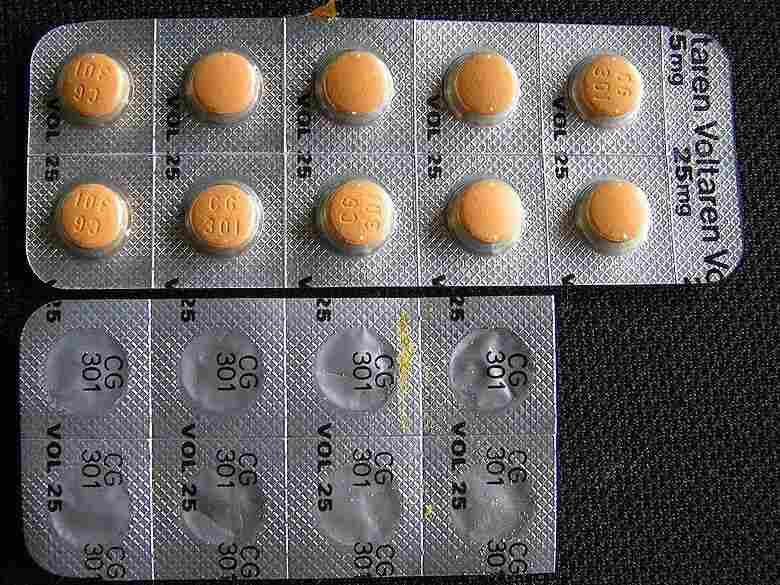 The painkiller diclofenac is sold under several brand names in the U.S. and abroad, including Voltaren. Wikimedia Commons hide caption 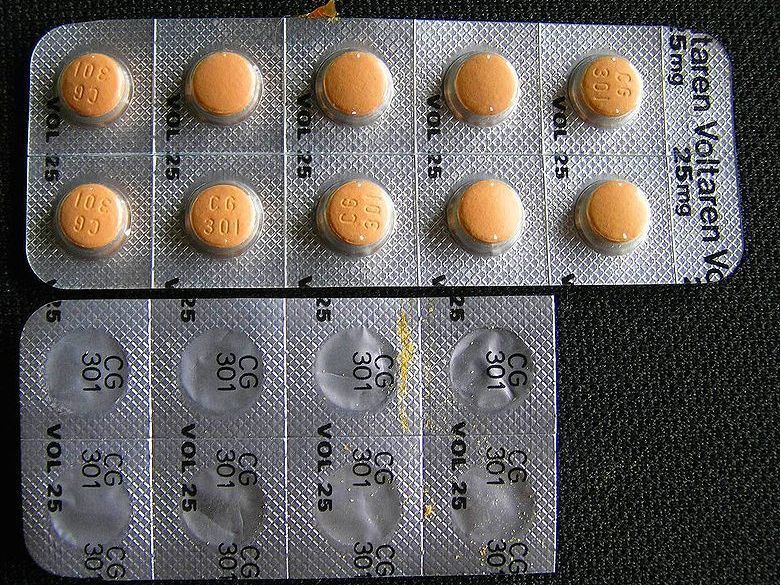 The painkiller diclofenac is sold under several brand names in the U.S. and abroad, including Voltaren.

The painkiller diclofenac isn't very popular in the U.S., but it's by far the most widely used non-steroidal anti-inflammatory drug, or NSAID, in the world.

A slew of studies, though, show diclofenac — sold under the brand names Voltaren, Cambia, Cataflam and Zipsor — is just as likely to cause a heart attack as the discredited painkiller Vioxx (rofecoxib), which was pulled from the U.S. market in 2004.

But evidence of the drug's cardiovascular risk hasn't translated to a reduction in use, a paper in the journal PLOS Medicine found. Diclofenac far outsells ibuprofen, naproxen, and other NSAIDs in 15 countries around the world.

"If you look at it internationally, diclofenac is the single most widely used NSAID," says study author David Henry of the Institute for Clinical Evaluative Sciences in Toronto.

Henry tells Shots that diclofenac raises the risk of a cardiovascular "event" such as heart attack by about 40 percent, compared to taking no NSAID. Other NSAIDS are much safer, with naproxen being the least risky. Naproxen has a global market share of only 10 percent.

"Clearly thousands of people die as a result of using [diclofenac]," Henry says. "But these are invisible victims. And therefore, there's no advocacy lobby group on their behalf."

The bad cardiovascular risk profile of diclofenac is no secret. MedlinePlus, a U.S. government website, says people who take it "may have a higher risk of having a heart attack or a stroke" and that "these events may happen without warning and may cause death."

People with low cardiovascular risk probably can take diclofenac without much danger. If their annual risk of a heart attack is 1 in 1,000, the drug would raise it to only 1.4 per thousand.

But diclofenac would boost the risk in those with a 10 percent annual heart attack risk to 14 percent — a substantial increase, especially when multiplied over an entire population taking the popular pills for a wide range of aches and pains.

For instance, if only 1.3 percent of China's 1.3 billion people take diclofenac (a plausible assumption, since the drug is the most commonly used NSAID in Chinese hospitals), Henry and his coauthor Patricia McGettigan, of Barts and the London School of Medicine and Dentistry, say it could result in 14,000 preventable deaths.

Countries where diclofenac dominates the painkiller market are largely low- and middle-income nations such as Bangladesh, Pakistan, Thailand and Vietnam. But the list also includes England, Australia and New Zealand. And the drug is number three among Canadian NSAIDs, with more than 17 percent of the market.

Henry says there's a perception that diclofenac is a more potent painkiller than other NSAIDs. "We think that's just because it's been marketed in high doses." Higher doses also magnify the cardiovascular risk.

The study authors are petitioning the World Health Organization to remove diclofenac from the agency's list of so-called "essential medicines," which qualify in many countries for public support. Henry said it would be a gargantuan task to get diclofenac removed from the market, since drugs are regulated on a nation-by-nation basis.

Diclofenac, which dates to the 1970s, is one of the oldest NSAIDs. These drugs act by suppressing prostaglandins, small molecules that have many effects throughout the body.

He says "drugs like diclofenac and Vioxx inhibit the good prostaglandins without inhibiting the bad ones."

Another NSAID that operates in the same undesirable way is etoricoxib. Henry and McGettigan find that it's also used in many countries, but it hasn't been approved in North America.