Accessibility links
SARS-Like Virus Spreads From One Person To Another : Shots - Health News Until now, a new SARS-like virus showed little signs of being contagious. Only 10 cases have been reported, and all appeared to originate in the Middle East. Health officials now say a British resident likely caught the virus from a family member in the U.K., indicating that the virus can spread between people. 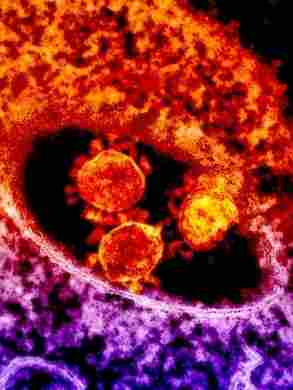 A mysterious illness with a striking resemblance to the one caused by the SARS virus emerged in the Middle East last year.

But the new virus behind the latest cases didn't seem to be contagious – until now.

A British resident likely caught the disease from a family member in the U.K., health officials said Wednesday. The patient was in close contact with a sick relative and had never traveled to the Middle East, where all other cases of the new illness originated.

This is "strong evidence" that the new virus (a type of coronavirus) can be transmitted from one person to another, John Watson, an epidemiologist from the U.K.'s Health Protection Agency, said in a statement.

"Confirmed novel coronavirus infection in a person without travel history to the Middle East suggests that person-to-person transmission has occurred, and that it occurred in the U.K.," he said.

But Watson was also quick to point out that the threat of the virus appears to be very low.

Another health problem likely made the patient more vulnerable to infection, he said. And no doctors or nurses have caught the disease, which suggest the virus is extremely poor at transmitting from person to person.

There have been only 11 known cases involving the new coronavirus wordwide. But five of the people infected died. The virus causes severe respiratory problems and sometimes kidney failure.

Many virologists don't seem too concerned by the new evidence of person-to-person transmission for the coronavirus.

"This doesn't raise too many alarm bells," John Oxford, from Queen Mary, University of London, told the BBC, "In a family, things can spread far more easily than they would spread outside. People share towels and toothbrushes etc."

"If it was somebody who was not related or a nurse or a doctor — that would be a lot more serious," he said.

Six heath care workers, who came in contact with the patient, are being monitored, The Associated Press reports. But none of them have shown signs of an infection.