Accessibility links
Sacrificing Sleep Makes For Run-Down Teens — And Parents : Shots - Health News Getting enough sleep is as crucial as eating well and exercising. But with family life spinning faster and faster, solid shut-eye is sometimes hard to come by. That can hurt kids' health — and increase their weight. 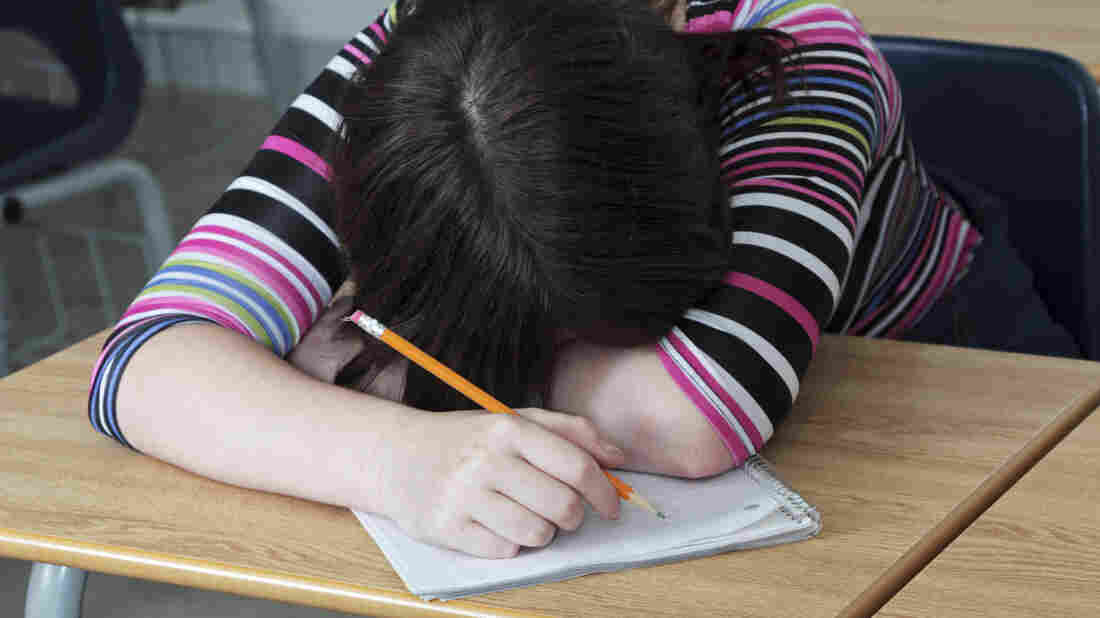 Napping in class may be common, but it's also a sign that kids need more sleep. iStockphoto.com hide caption

When NPR, the Robert Wood Johnson Foundation and the Harvard School of Public Health asked parents and caregivers in our new poll whether getting a good night's sleep is important, families overwhelmingly told us that sleep is a high priority.

But almost all said that it's difficult to pull off. And studies suggest this is especially true for teenagers.

As we've reported in our On the Run series, families are feeling stretched by the competing demands on their time.

Celeste Higgins of Miami, Fla., knows the struggle. Her two kids, ages 12 and 16, have demanding academic schedules and play competitive sports. Higgins also has a full-time job, so she often finds herself sacrificing her own sleep to make sure her kids are on track and where they need to be, such as at a 7 a.m. regatta.

"There just aren't enough hours in the day," she says. Her son Rory, who has rowing team practice six days a week, is often up until about midnight doing homework. And his day starts at the crack of dawn, leaving about 6 or 6 1/2 hours for sleep each night.

Lots of teens are cruising by on too little sleep, but that's not ideal.

"All of the data we have suggests that teenagers need 8 1/2 to 9 1/4 hours of sleep per night," explains sleep expert Helene Emsellem, medical director of the Center for Sleep & Wake Disorders in Chevy Chase, Md.

When teens don't get enough sleep, there are consequences beyond just being more irritable or moody.

Over the long term, a lack of sleep can influence appetite, nudging a person to reach for more empty carbohydrates and sugar. Inadequate sleep also seems to send a signal to our bodies to store more fat. A recent study found that sleep deprivation reduces insulin sensitivity, setting the stage for a range of metabolic problems, including Type 2 diabetes and weight gain.

"We have a growing body of literature that ties weight gain to our 24/7 society and inadequate sleep," says Emsellem.

For now, most of the data come from studies of adults. But researchers have begun to find correlations with children and adolescents, too.

And there's another consequence of being poorly rested: "When we're sleepy, we have a cognitive disorder of focus, attention and concentration," Emsellem says.

The forgetfulness and distraction that's so common among teens, she says, may result partly from sleepiness.

Though some top students can thrive despite a sleep deficit, others may not be so lucky. Being well-rested, researchers say, enhances academic performance.

Why? "We are actually learning during sleep," says Emsellem. In some sleep stages, our brains are taking the information we've gathered during the day "and laying it down into the memories that are going to allow us to retrieve the information" at a later time, she explains.

A short catnap can be restorative, she says. But limit the nap to no more than 30 minutes, and try to sneak it in before 5 p.m.

Catching extra shut-eye on the weekends can help the sleep-starved, Emsellem says, but you don't want to sleep so late that you reset your body clock, making it hard to drift off at a reasonable hour the next night. A good rule of thumb is to sleep no more than two hours past your typical weekday wake-up time.

And here are a few more tips aimed particularly at teens:

1. Keep a regular study schedule: Cramming late at night cuts into sleep, and may create an irregular sleep-wake schedule.

2. Turn off the electronics earlier in the evening, especially the hour before you need to hit the sack. Text-messaging, watching television, playing video games and doing other sorts of computer work can disrupt your ability to fall asleep. And a chirping cellphone may wake you up at night.

3. Eliminate or cut down on caffeine, particularly in the three to five hours before you want to fall asleep.