Accessibility links
A Mother's Death Tested Reporter's Thinking About End-Of-Life Care : Shots - Health News Studies show that end-of-care is often futile. It doesn't always prolong lives, and it doesn't always reflect what patients want. But for families making decisions about loved ones, balancing the evidence and emotions can be wrenching. 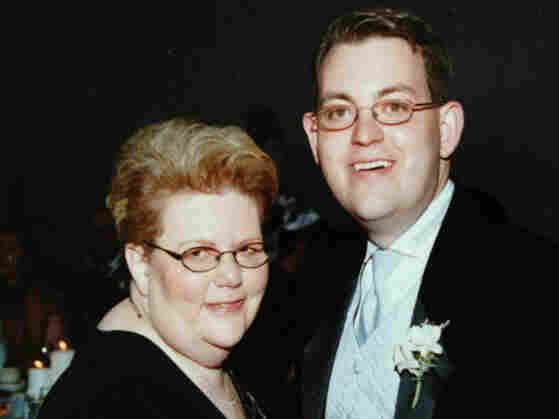 Charles Ornstein with his mother, Harriet Ornstein, on his wedding day, weeks after she was mugged in a parking lot and knocked to the pavement with a broken nose. Randall Stewart/Courtesy of Charles Ornstein hide caption 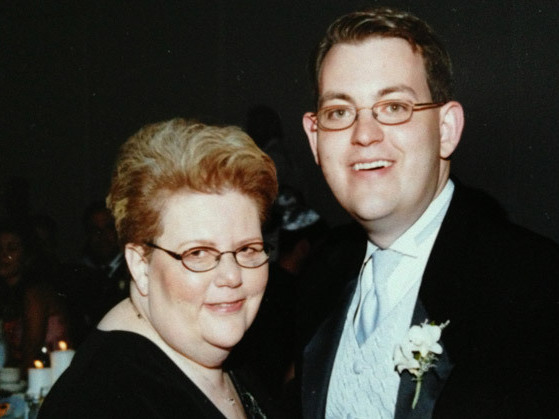 Charles Ornstein with his mother, Harriet Ornstein, on his wedding day, weeks after she was mugged in a parking lot and knocked to the pavement with a broken nose.

My father, sister and I sat in the near-empty Chinese restaurant, picking at our plates, unable to avoid the question that we'd gathered to discuss: When was it time to let Mom die?

It had been a grueling day at the hospital, watching — praying — for any sign that my mother would emerge from her coma. Three days earlier she'd been admitted for nausea; she had a nasty cough and was having trouble keeping food down. But while a nurse tried to insert a nasogastric tube, her heart stopped. She required CPR for nine minutes. Even before I flew into town, a ventilator was breathing for her, and intravenous medication was keeping her blood pressure steady. Hour after hour, my father, my sister and I tried talking to her, playing her favorite songs, encouraging her to squeeze our hands or open her eyes.

Doctors couldn't tell us exactly what had gone wrong, but the prognosis was grim, and they suggested that we consider removing her from the breathing machine. And so, that January evening, we drove to a nearby restaurant in suburban Detroit for an inevitable family meeting.

My father and sister looked to me for my thoughts. In our family, after all, I'm the go-to guy for all things medical. I've been a health care reporter for 15 years: at the The Dallas Morning News, Los Angeles Times and now ProPublica. And since I have a relatively good grasp on America's complex health care system, I was the one to help my parents sign up for their Medicare drug plans, research new diagnoses and question doctors about their recommended treatments.

In this situation, like so many before, I was expected to have some answers. Yet none of my years of reporting had prepared me for this moment, this decision. In fact, I began to question some of my assumptions about the health care system.

I've long observed, and sometimes chronicled, the nasty policy battles surrounding end-of-life care. And like many health journalists, I rolled my eyes when I heard the phrase "death panels" used to describe a 2009 congressional proposal that would have allowed Medicare to reimburse physicians who provided counseling to patients about living wills and advance directives. The frenzy, whipped up by conservative politicians and talk show hosts, forced the authors of the Affordable Care Act to strip out that provision before the bill became law.

Politics aside, I've always thought that the high cost of end-of-life care is an issue worthy of discussion. About a quarter of Medicare payments are spent in the last year of life, according to recent estimates. And the degree of care provided to patients in that last year — how many doctors they see, the number of intensive-care hospitalizations — varies dramatically across states and even within states, according to the authoritative Dartmouth Atlas.

In an article I wrote for the Los Angeles Times in 2005, I quoted a doctor saying: "There's always one more treatment, there's always one more, 'Why don't we try that?' ... But we have to realize what the goals of that patient are, which is not to be in an intensive-care unit attached to tubes with no chance of really recovering."

That made a lot of sense at the time. But did it apply to my mom?

We knew her end-of-life wishes: She had told my dad that she didn't want to be artificially kept alive if she had no real chance of a meaningful recovery. But what was a real chance? What was a meaningful recovery? How did we know if the doctors and nurses were right? In all my reporting, I'd never realized how little the costs to the broader health care system matter to the family of a patient. When that patient was my mother, what mattered was that we had to live with whatever decision we made. And we wouldn't get a chance to make it twice.

As my mom lay in the ICU, there was no question that her brain function was worrisome. In the hours after she was revived, she had convulsions, known as myoclonus, which can happen if the brain lacks oxygen. After that, she lay still. When the neurologist pricked her with a safety pin, she didn't respond. When he touched her corneas, they didn't reflexively move.

I began checking the medical literature, much like I do as a reporter. I didn't find anything encouraging. Studies show that after 72 hours in a coma caused by a lack of oxygen, a patient's odds of recovery are slim to none. I asked my writing partner in New York to do additional research. She, too, found nothing that would offer much hope.

But couldn't my mom beat the odds? Harriet Ornstein was a feisty woman. At age 70, she had overcome adversity many times before. In 2002, weeks before my wedding, she was mugged in a parking lot and knocked to the pavement with a broken nose. But she was there to walk me down the aisle — black eyes covered by makeup. She had Parkinson's disease for a decade, and in 2010 she suffered a closed head injury when a car backed into her as she walked down a handicapped ramp at the drugstore. Mom persevered, continuing rehabilitation and working to lead as normal a life as possible. Might she not fight through this as well?

Truth be told, I was already somewhat skeptical about physician predictions. Just last summer, my dad's heart stopped, and it took more than 10 minutes of CPR to revive him. Doctors and nurses said a full neurological recovery was unlikely. They asked about his end-of-life choices. Mom and I stayed up late talking about life without him and discussing the logistics of his funeral. But despite it all, he rebounded. He was home within weeks, back to his old self. I came away appreciative of the power of modern medicine but questioning why everyone had been so confident that he would die.

Also weighing on me was another story I wrote for the Los Angeles Times, about a patient who had wrongly been declared brain-dead by two doctors. The patient's family was being urged to discontinue life support and allow an organ-donation team to come in. But a nursing supervisor's examination found that the 47-year-old man displayed a strong gag-and-cough reflex and slightly moved his head, all inconsistent with brain death. A neurosurgeon confirmed her findings.

No one was suggesting that my mom was brain-dead, but the medical assessments offered no hint of encouragement. What if they were off base, too?

Over dinner at the Chinese restaurant, we made a pact: We wouldn't rush to a decision. We would seek an additional medical opinion. But if the tests looked bad — I would ask to read the actual clinical reports — we would discontinue aggressive care.

A neurologist recommended by a family acquaintance came in the next morning. After conducting a thorough exam, this doctor wasn't optimistic, either, but she said two additional tests could be done if we still had doubts.

If more tests could be done, my dad reasoned, we should do them. My sister and I agreed.

On Friday morning, the final test came back. It was bad news. In a sterile hospital conference room, a neurologist laid out our options: We could move my mom to the hospice unit and have breathing and feeding tubes inserted. Or we could disconnect the ventilator.

We decided it was time to honor my mom's wishes. We cried as nurses unhooked her that afternoon. The hospital staff said it was unlikely that she would breathe on her own, but she did for several hours. She died peacefully, on her own terms, late that night — my dad, my sister and I by her side.

I don't think anyone can ever feel comfortable about such a decision, and being a health reporter compounded my doubts.

I was fairly confident that we did what my mom would have wanted. But a week later, when I was back in New York and had some emotional distance, I wondered how our thinking and behavior squared with what I'd written as a reporter. Did we waste resources while trying to decide what to do for those two extra days? If every family did what we did, two days multiplied by thousands of patients would add up to millions of dollars.

Curious how experts would view it, I called Elliott S. Fisher. I've long respected Fisher, a professor of medicine at Dartmouth and a leader of the Dartmouth Atlas. The Atlas was the first to identify McAllen, Texas, subject of a memorable 2009 piece in the New Yorker by Atul Gawande, for its seemingly out-of-control Medicare spending.

I asked Fisher: Did he consider what my family did a waste of money?

No, he said. And he wouldn't have found fault with us if we decided to keep my mom on a ventilator for another week or two, although he said my description of her neurological exams and test results sounded pessimistic.

"You never need to rush the decision-making," he told me. "It should always be about making the right decision for the patient and the family. ... We have plenty of money in the U.S. health care system to make sure that we're supporting families in coming to a decision that they can all feel good about. I feel very strongly about that."

Plenty of money? How did this mesh with his view that too much money is spent on care at the end of life? He said his concern is more about situations in which end-of-life wishes aren't known and cases where doctors push treatments for terminal illnesses that are clearly futile and that may prolong suffering.

"I don't think the best care possible always means keeping people alive or always doing the most aggressive cancer chemotherapy," he said, "when the evidence would say there is virtually no chance for this particular agent to make a difference for this patient."

I left the conversation agreeing with Fisher's reasoning but believing that it's much harder in practice than it is in theory. You can know somebody's wishes and still be confused about the appropriate thing to do.

The past few weeks have been the most difficult of my life. I hope what I learned will make me a better, more compassionate journalist. Most of all, I will always remember that behind the debate about costs and end-of-life care, there are real families struggling with real decisions.

This story was originally co-published by ProPublica and The Washington Post. Charles Ornstein, senior reporter at ProPublica, is board president of the Association of Health Care Journalists and can be reached at charles.ornstein@propublica.org.