Accessibility links
Hardening Of Human Arteries Turns Out To Be A Very Old Story : Shots - Health News Living like a hunter-gatherer won't guarantee you'll be free of heart disease, according to a study of ancient human remains. Scans of mummies from preindustrial Egypt, Peru, the American Southwest and Alaska's Aleutian Islands finds evidence of hardened arteries thousands of yeas ago. 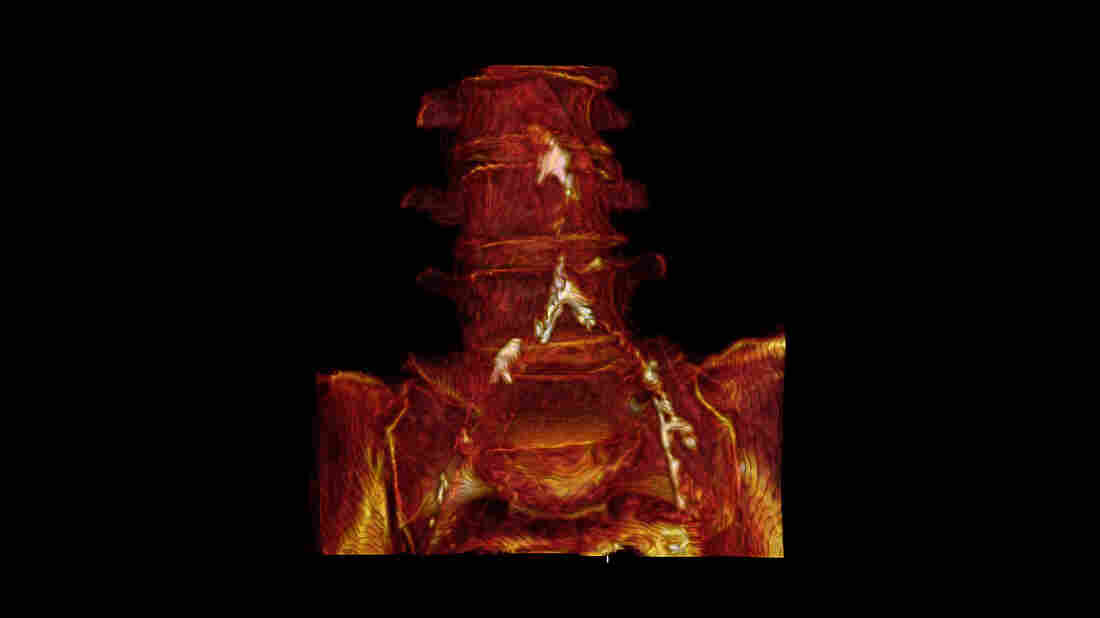 A 3-D reconstruction of Mummy 38's CT scans shows calcification in her aorta and iliac arteries. Courtesy of The Lancet hide caption 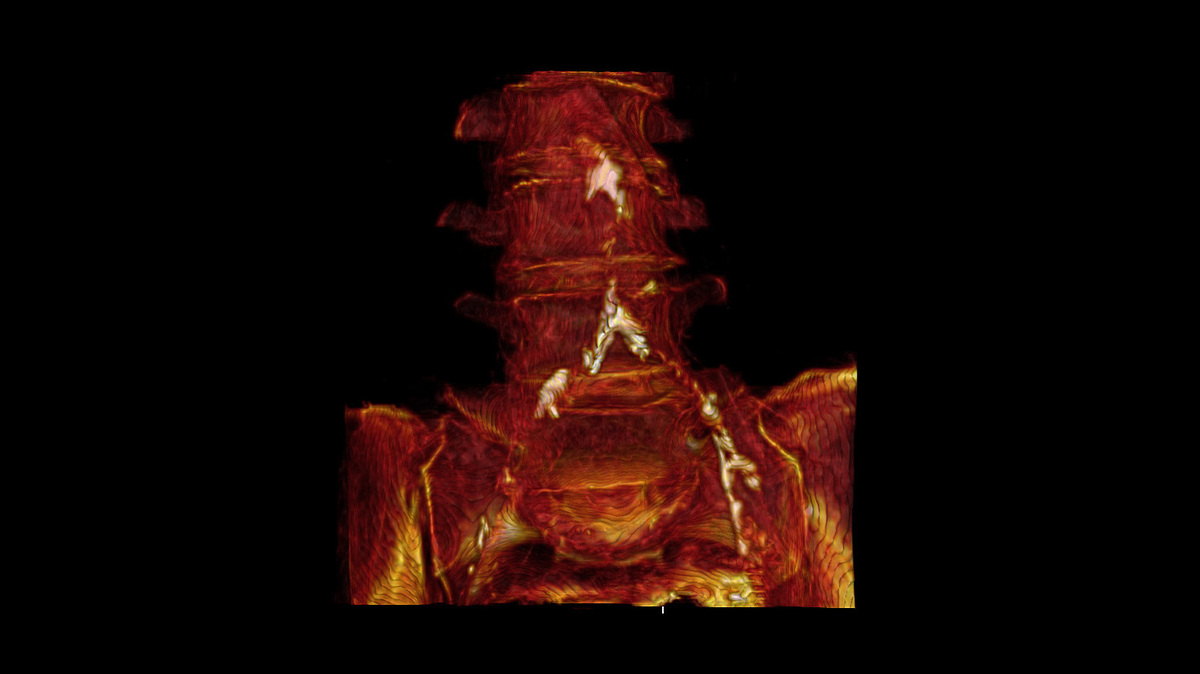 A 3-D reconstruction of Mummy 38's CT scans shows calcification in her aorta and iliac arteries. 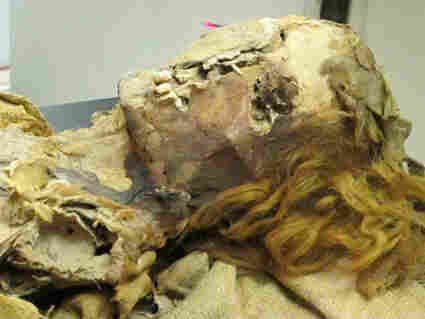 Mummy 38 was between 45 and 50 years old when she died in ancient Egypt. She was excavated from the Fayoum Oasis. Courtesy of The Lancet hide caption 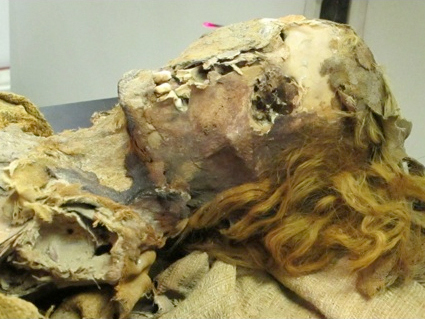 Mummy 38 was between 45 and 50 years old when she died in ancient Egypt. She was excavated from the Fayoum Oasis. 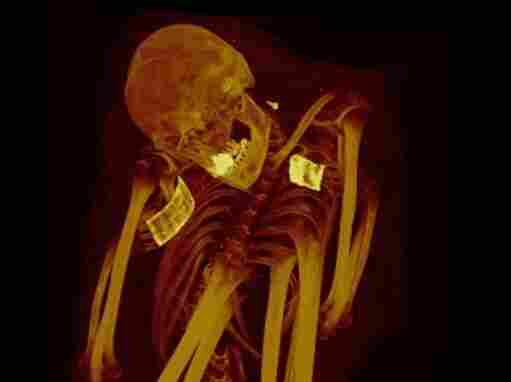 The CT scans of a Peruvian mummy from about 200-900 B.C. showed calcification in the aorta and iliac arteries. Courtesy of The Lancet hide caption

Going "paleo" may not be the answer to heart disease, after all.

A few years ago, a team of researchers challenged our understanding of heart disease as a modern affliction. They found evidence of hardened arteries in the CT scans of ancient Egyptian mummies.

It was a little surprising since our predecessors didn't have fried chicken or cars.

Some critics claimed that because of their high socioeconomic status the Egyptians studied had probably been pretty sedentary and had probably eaten a diet of rich foods— a lot like many of us today. The prevalence of hardened arteries in those mummies surely couldn't be expected in all ancient Egyptians, or across all ancient cultures, the skeptics reasoned.

Well, the same research team did another study, broadening the the analysis to include mummies from three other preindustrial populations: 51 ancient Peruvians, five Ancestral Puebloans of the U.S. Southwest and five Unangan of Alaska's Aleutian Islands. They also included 76 more ancient Egyptians.

"We expanded our search to other mummies on other continents, in other cultures and found something similar," says Randall Thompson, a cardiologist and co-author of the The Lancet study.

Ultimately, calcium deposits signifying atherosclerosis were not hard to find across the four different cultures. More than a third of the 137 mummies showed signs of probable or definite hardened arteries, with 25 cases of calcification in the walls of preserved arteries and another 24 along the expected course of an artery.

"It's amazing that you can see this disease in all these different populations across 4,000 years of history, across three continents — such a wide span across the globe and all sorts of different diets and lifestyles and climates," Thompson says. "Our conclusion is that, in large part, heart disease is part of human ageing and that we have risk factors that we don't understand yet."

The research brought together experts in cardiology, archaeology, anthropology, paleopathology and biology from around the world. "All brought expertise and were able to tell me things about the people that we were scanning that went above and beyond what we could tell from the CT scans," Thompson says. "It was like they became our patients."

From here, the team wants to stay on the mystery and delve into possible risk factors for these ancestors, possibly examining tissue or genetic samples, Thompson says. "We're trying to reach back as far as we can for the origins of this disease because it impacts modern people so much."

Even so, Dr. Mike Knapton, of the British Heart Foundation, told The Associated Press, that calcified arteries could also be caused by other health problems and that it wasn't possible to say from the CT scans alone whether the calcium deposits in the mummies would have triggered heart attacks or strokes. "It's a fascinating study but I'm not sure we can say atherosclerosis is an inevitable part of aging," he said.

Thompson, for his part, says that the mummy findings don't invalidate any of the current research associating unhealthy diets, a lack of exercise, and smoking with heart disease. "There are certainly diets and lifestyles that are healthier than others and we should advocate those."