Accessibility links
Can Free Video Consults Make Parkinson's Care Better? : Shots - Health News Telemedicine sounds like a good idea, but state laws limit it, and insurers usually won't pay for that. Parkinson's specialist Ray Dorsey is determined to prove that it can work, one patient at a time. The latest lure: free 30-minute consults. 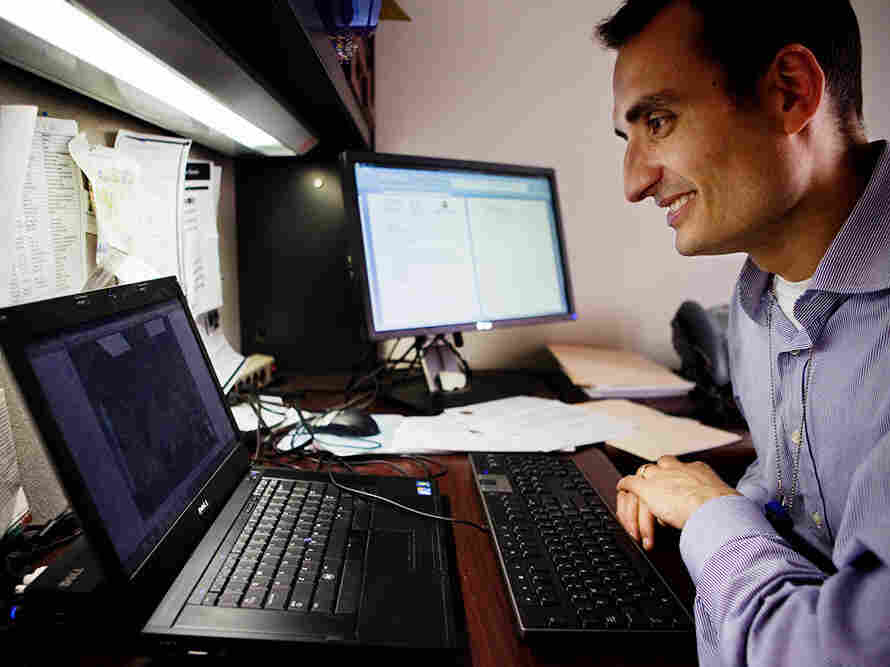 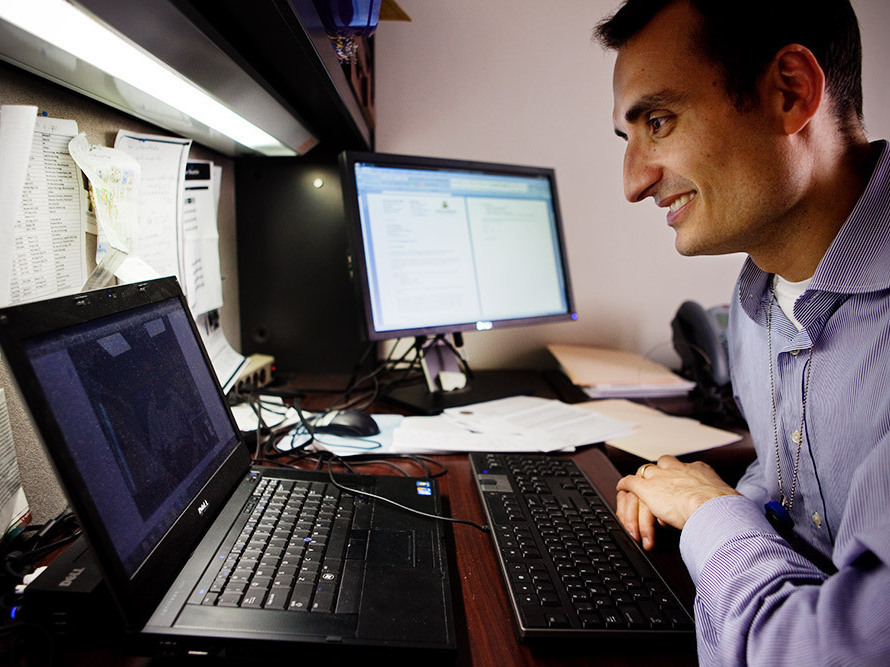 Dr. Ray Dorsey video chats with a patient in New York State from his office at Johns Hopkins Medical Center in Baltimore in 2011.

Why, you might ask, would a hoity-toity medical institution like Johns Hopkins be offering up free Web-based consults for people with Parkinson's disease?

To prove that it works.

Ray Dorsey, director for the Johns Hopkins Movement Disorders Center, is on a mission to convince America that videochats with doctors are as good or better than the traditional office visit.

It's a tough sell, since out-of-state doctors are barred from treating patients remotely in most states, and Medicare doesn't pay for telemedicine delivered to a patient's home.

"Right now, Medicare pays more when care is provided in a high-cost environment like a hospital," Dorsey says. "We should stop subsidizing high-cost centers of care, and start subsidizing care in low-cost, convenient, patient-centered locations."

So Dorsey has been hacking away at those barriers, data bit by data bit.

First he showed that patients with Parkinson's disease could get quality specialist care care via teleconference at a nursing home, as we reported back in 2011. The project was cheap, using a $25 webcam and $150 videoconferencing software. The patients said the care was better than the non-specialist care they'd been getting from office visits.

Next, Dorsey tried video house calls. The results of that experiment appear this week in JAMA Neurology.

In the study, 10 patients with Parkinson's teleconferenced from their home computers for specialist visits, while another 10 made the schlep to the office.

A shlep it was. It took the patients with office visits 4.25 hours to go to the doctor, compared with 53 minutes for the teleconferencers.

The home consults were not just more convenient and comfortable, the patients said; they were cheaper, with costs dropping by $52 to $85 per visit. The downside: less personal contact, incomplete information, and tech issues.

Dorsey is trying to erase that deficit. "We'll do everything we can to remove every conceivable barrier," he says.

So he's now offering up free one-time video consultations. The 30-minute consult can include advice on diagnoses, tests, medication changes, physical therapy, and the patient's prognosis. "You call us toll-free, and we'll set up a visit for you and your family members for free," Dorsey says. The number? 855-237-7446.

But the freebie is available only to people who live in California, Delaware, Florida, Maryland, and New York, because Dorsey can't deliver medical care, even via the web, in states where he's not licensed. People outside the U.S. don't have to worry about that, so the offer's open to people worldwide.

"Now we're saying, 'remove distance, remove disability, remove the distribution of doctors,'" Dorsey says. "Patients will come into an era where anyone, anywhere, can get the care they need."

The free doctor visits are funded by a $50,000 grant from Verizon, which, along with Google and Excellus BlueCross BlueShield, has also helped pay for Dorsey's research. Those first two are unusual funders for clinical trials.

"Using telemedicine allows the hospital to save patients thousands of miles of travel and improve lives by increasing access to specialized care," Verizon said on Facebook when it made the award.

Still, $50,000 seems like a pretty meager sum for paying specialists. But Dorsey says Parkinson's care is actually pretty cheap. He gets only $100 from Medicare for a follow-up visit.

With the grant money, at least 500 people could get a free visit. But so far only 50 or so have used the service, probably because it's been promoted on an obscure page on the Hopkins website.

Avail yourself of this offer, and you could be in the vanguard of the long-delayed telemedicine revolution.