Accessibility links
Neurologists Warn Against ADHD Drugs To Help Kids Study : Shots - Health News Adderall and other stimulant drugs help students stay focused, a benefit that hasn't been lost on people without ADHD. Now the nation's neurologists say children and teens shouldn't be be prescribed these drugs for "neuroenhancement." 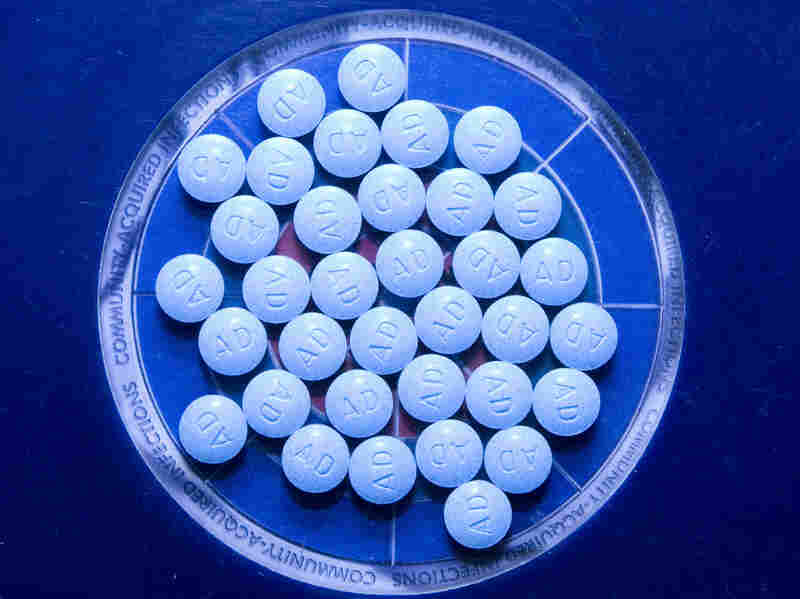 Ten milligram tablets of the prescription drug Adderall. The drug is used to treat ADHD and is used by some students to boost their academic performance. Jb Reed/Bloomberg via Getty Images hide caption

Adderall and other ADHD medications are among the most prescribed drugs in America.

Quite a few of those pills don't end up being used to treat ADHD, though. They're used as "smart drugs" or "study drugs" by students who find the pills give them a mental edge.

The American Academy of Neurology now says: Stop that.

The brain docs are directing that advice first and foremost to their fellow physicians, the ones who have been writing all those scrips for people who don't have ADHD, or who perhaps don't think about all the pills their patients sell on the student black market.

"We don't believe that doctors are supposed to be drug dispensers for healthy people," says William Graf, a professor of pediatrics and neurology at the Yale School of Medicine. "This is an ethics issue."

But the message is also being sent to teenagers and their parents, some of whom who might think that giving their child a little leg up for a big test isn't such a bad thing. The buzz term for that? "Pediatric neuroenhancement."

Prescribing ADHD drugs to children who don't have the disorder is "not justifiable," according to the American Academy of Neurology's new position paper. That's because children's brains are still developing, the paper says, and they don't have the ability to weigh the risks and benefits of medication.

Prescribing study drugs is "inadvisable" in teenagers, the Academy said, a word chosen to reflect both teenagers' growing autonomy, and the fact that the Academy can't tell doctors what drugs they can and can't prescribe.

The number of children diagnosed with ADHD rose 24 percent from 2001 to 2011, according to a study published earlier this year. Over the same time, the number of prescriptions for Adderall and other ADHD drugs has soared exponentially.

More pills in circulation means more pills that can be bought, borrowed, or snitched. Various surveys report that 8 to 35 percent of college students say they have used stimulant pills to improve school performance.

The neurologists are not saying that stimulant drugs shouldn't be used to treat ADHD, which is characterized by problems with attention and hyperactivity. "We're not touching that here," Graf told Shots.

What they are saying is that doctors have a moral obligation to protect the best interests of the child — who doesn't yet have legal control over health care decisions — and to prevent the misuse of medication.

Amphetamines like Adderall and Vyvanse can be addictive, which is why they're classified as Schedule II controlled substances, along with Oxycontin and morphine. Side effects can be as simple as insomnia, or as serious as sudden high blood pressure, irregular heartbeat, and seizures.

Other popular ADHD drugs like Concerta and Ritalin are methlphenidates, and are considered less risky. But they can cause a wide range of side effects including insomnia, aggression, mood and behavior changes, twitching, and shaking.

About 15 percent of 12th graders say they misuse prescription drugs, according to the 2012 Monitoring the Future survey, and about 6 percent say they've misused Ritalin or Adderall. Adderall is the only drug class that showed increased use in 2012, the federal survey reported.

Doctors should talk with patients and parents about why they feel the need for academic performance enhancing drugs, Graf says. Then they should point out that there are other ways to deal with competition and anxiety.

"We have to get back to the basics," Graf says. "Sleep, exercise, and social interaction."