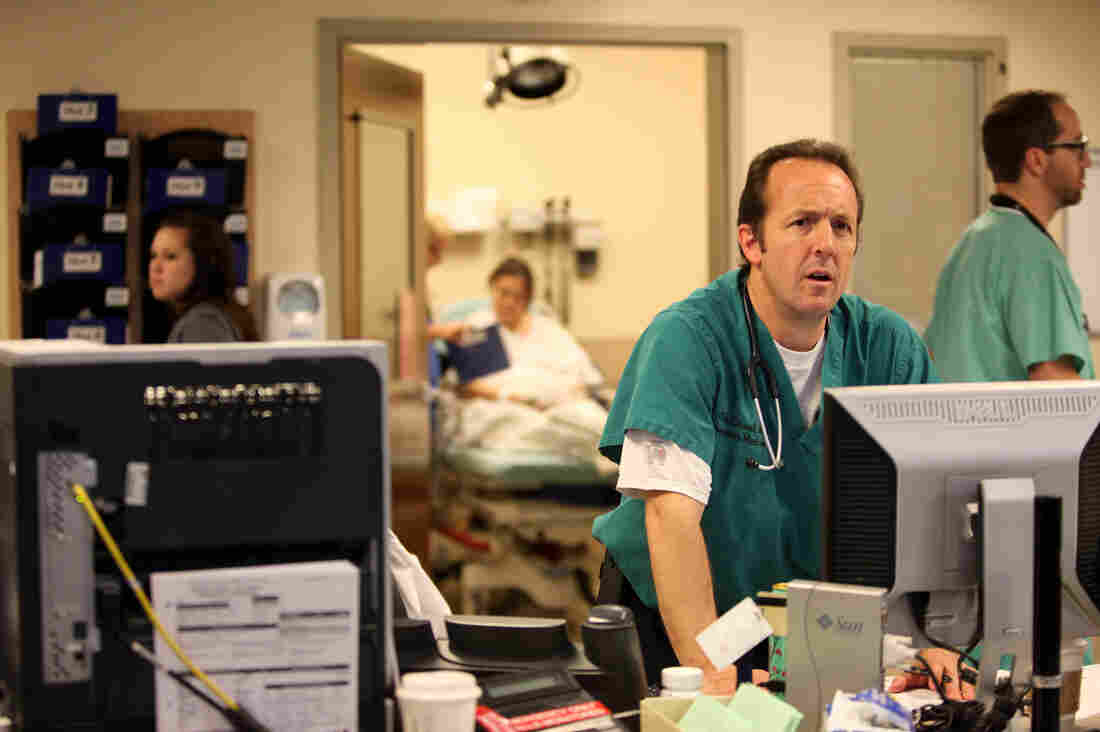 Chris Colwell, director of emergency medicine at Denver Health, has treated victims from two of the deadliest mass shootings in the U.S. He says he's deeply disturbed by how easy it is to get guns. Barry Gutierrez/for NPR hide caption 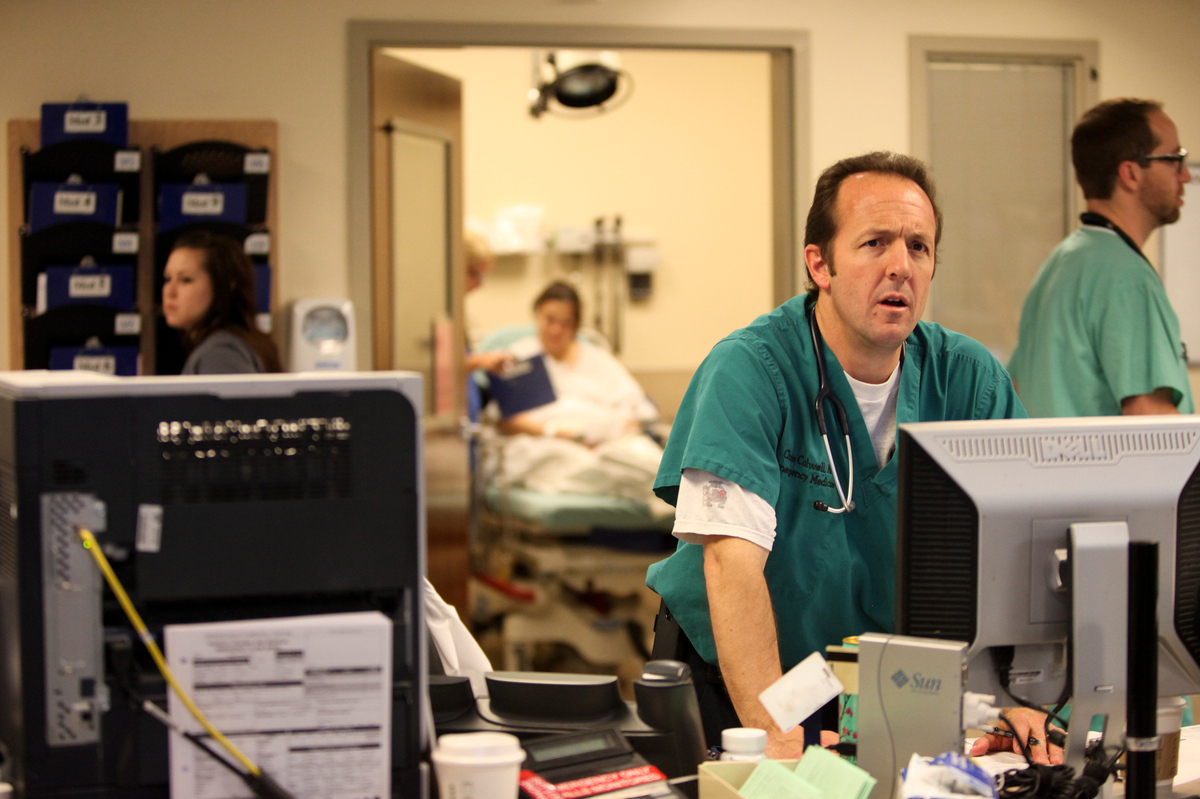 Chris Colwell, director of emergency medicine at Denver Health, has treated victims from two of the deadliest mass shootings in the U.S. He says he's deeply disturbed by how easy it is to get guns.

In Colorado, more people die from gunshots than car crashes. And that has a profound effect on the people on the front lines who treat gunshot victims.

Chris Colwell is an emergency room doctor in Denver, and says he sees gun violence victims on a weekly basis. When those cases are fatal, they are hard for him to forget.

"They'll come in, and they'll look at me, and they'll talk to me, and then they'll die," says Colwell, who has been at Denver Health, the city's biggest public hospital, for 20 years.

Colwell also treated casualties from two of the deadliest mass shootings in American history. He responded to the scene during the 1999 massacre at Columbine High School, where 15 died. He also treated victims of last July's movie theater shooting in Aurora, where a dozen were killed and 58 were wounded.

But he doesn't just treat the victims — often, he'll also treat the shooter after he or she has been caught by police. Colwell describes a case from a few months ago where he treated a woman — who later died — and her husband, the shooter.

"They had had a fight. He had caught her in what he felt was cheating, and he had lost his temper," he says. "He went and grabbed the pistol that he had for home defense at his bedside, and he made a snap decision, and he realized his life will never be the same, and hers was gone."

He says it's remarkable how often people who pull the trigger are surprised at the consequences of their actions. And he's deeply disturbed by how easy it is to get guns. 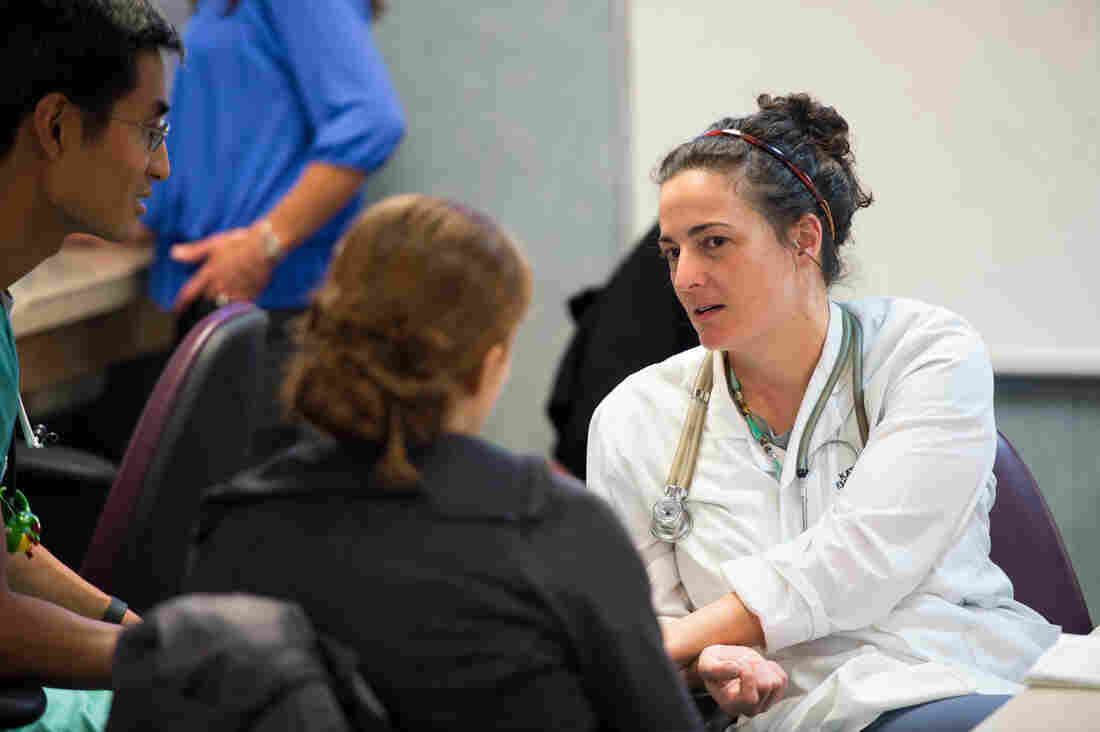 Dr. Katie Bakes, who works in the emergency department at Denver Health, is unequivocal in her opposition to guns. Scott Dressel-Martin/Courtesy of Denver Health hide caption 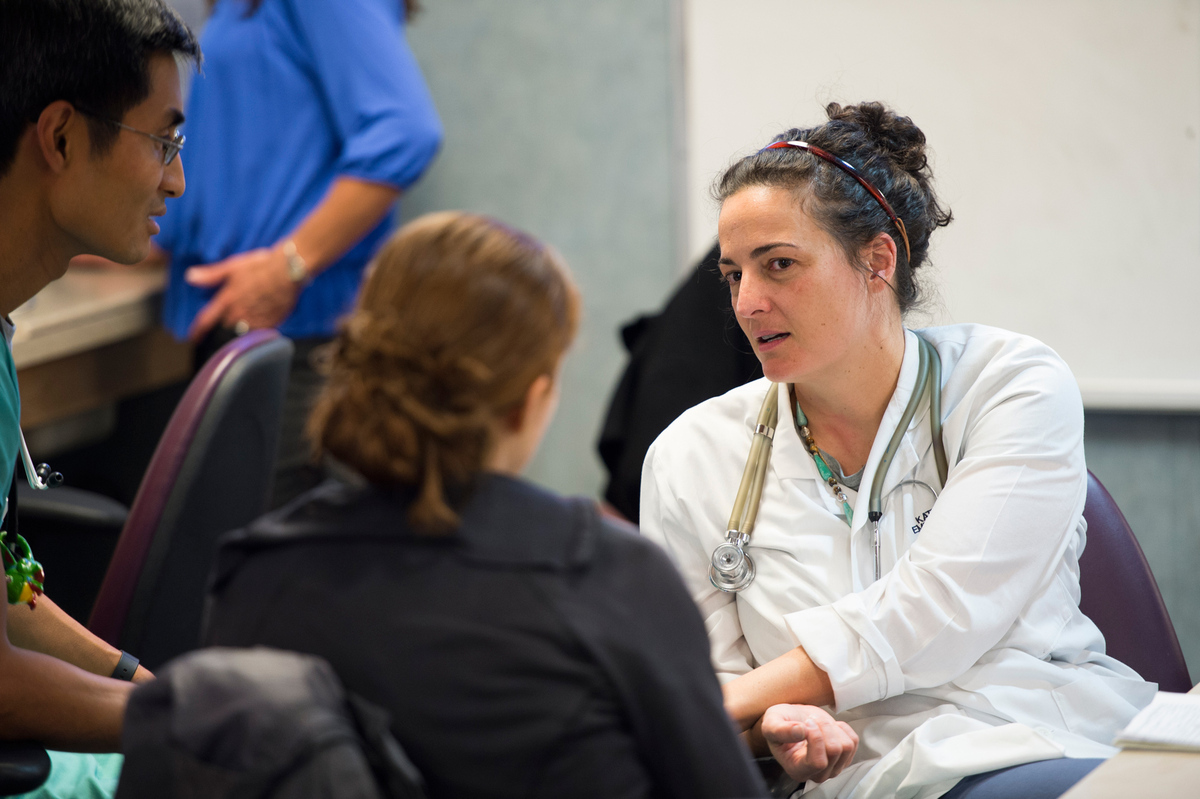 Dr. Katie Bakes, who works in the emergency department at Denver Health, is unequivocal in her opposition to guns.

Dr. Katie Bakes has worked with Colwell in the emergency department for 10 years. She says she can't shake the gunshot victims, either.

A few weeks ago, she came to work and learned that an ambulance was rushing in with a 3-year-old who'd been shot in the head. The mother had shot each of her three children and then committed suicide.

"Our patient was the only one who was a survivor," Bakes says.

Bakes is unequivocal in her opposition to guns:

"I hate guns. If I could snap my finger and get rid of all the guns, I would. I think they're evil. ... People are making money off them, and people are dying. And at some point, when we see what we see, I don't really care what the other side of the argument is. I don't care. I just don't want to see another 3-year-old come in and be shot in the head."

Bakes and Colwell say gun injuries seem much more deliberate than any other kind of trauma they see. 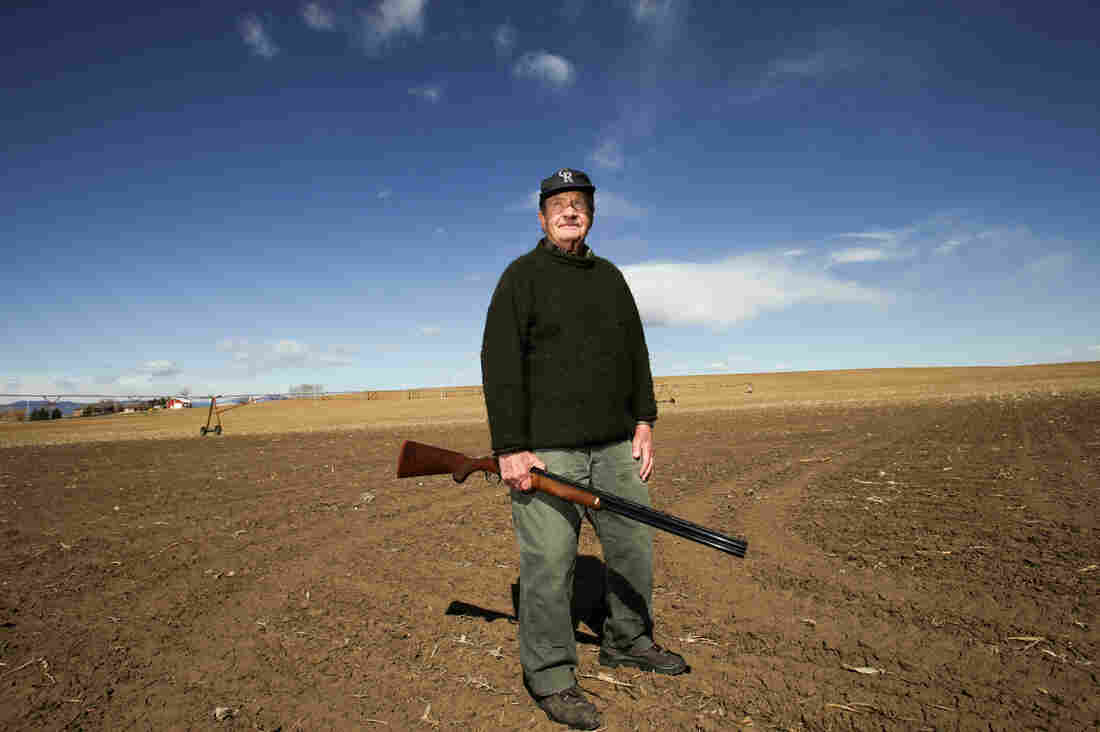 Jack Cletcher, a retired orthopedic surgeon, is an avid hunter in Longmont, Colo. He opposes most of the new gun restrictions lawmakers are discussing. Barry Gutierrez/for NPR hide caption 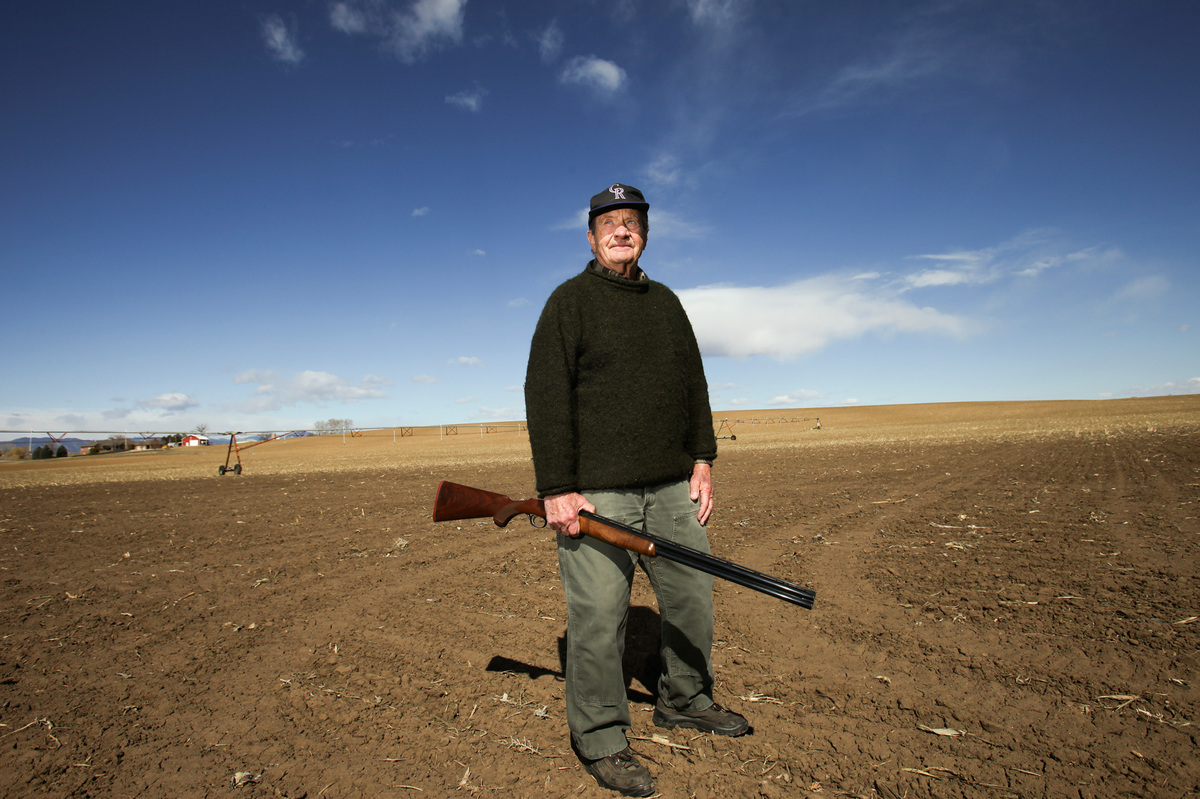 Jack Cletcher, a retired orthopedic surgeon, is an avid hunter in Longmont, Colo. He opposes most of the new gun restrictions lawmakers are discussing.

"It's so senseless," Bakes says. "You know, it's not an accident. Somebody intentionally pulled the trigger for whatever reason."

Dr. Jack Cletcher is a retired orthopedic surgeon and avid hunter in Longmont, Colo. He's treated his share of gunshot victims, too. Decades ago, he took care of wounded soldiers just off the plane from Vietnam.

He can sympathize with Bakes and Colwell, but he doesn't see guns as the root of the problem.

"This is the kind of emotional reaction that occurs with these horrible catastrophes that happen," Cletcher says. "The gun is only the instrument. It's not something that happens because the gun does it. There has to be somebody holding the gun to do it."

Cletcher is opposed to most of the new gun restrictions lawmakers are talking about in Denver and Washington, D.C.

"I don't think we need new laws; we just need to make the ones we have work better," says Cletcher. He would rather see lawmakers focus on better treatment for the mentally ill, and keeping guns out of their hands, he says.

Recently, leaders of the Colorado chapter of the American Medical Association went to Washington to lobby for measures to help prevent gun violence. Strengthening mental health care was on their agenda, and they support President Obama's executive action for increased research into gun violence.

Dr. John Bender, president-elect of the chapter, showed Rep. Ed Perlmutter, D-Colo., the results of a recent survey of Colorado AMA members, showing about two-thirds of their membership want to see gun regulations strengthened, and about a third don't. (There are other doctors around the country who don't, either.)

But a majority of AMA delegates at the national level have endorsed tighter restrictions on guns.