Accessibility links
How An Unlikely Drug Helps Some Children Consumed By Fear : Shots - Health News When abiding fear takes over some kids' lives, they respond with anger and aggression that's not premeditated. One psychiatrist says he's finding profound relief for a particular subgroup of these children in experimental research with the anesthesia drug ketamine. 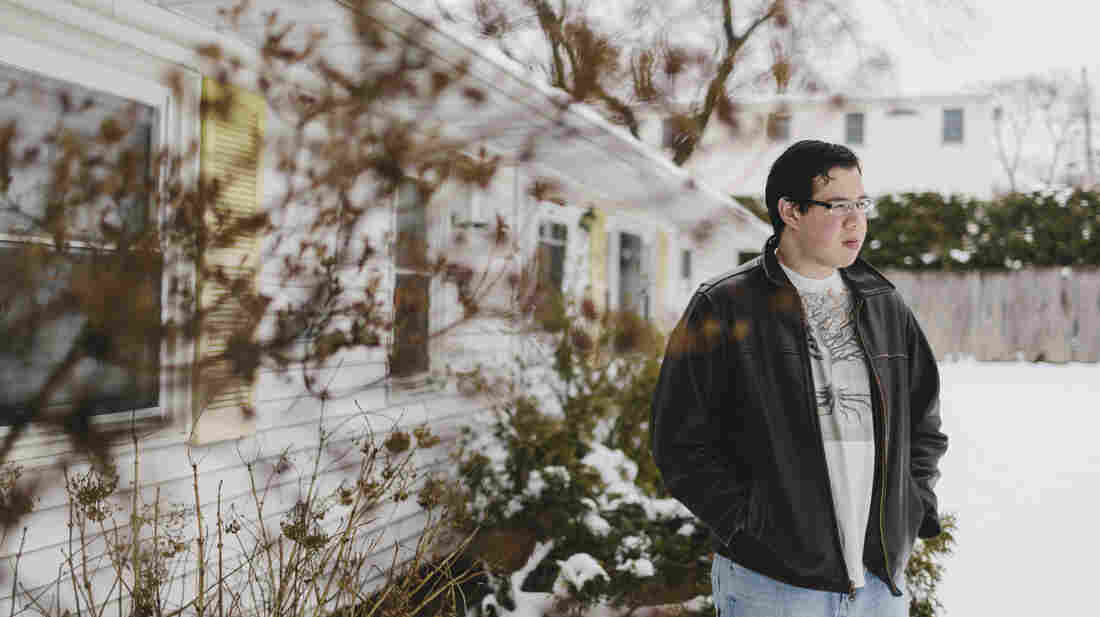 George McCann has been diagnosed with a subtype of bipolar disorder called the "fear of harm" profile, and finds that a prescribed dose of ketamine every few days alleviates his symptoms. Michael Rubenstein for NPR hide caption 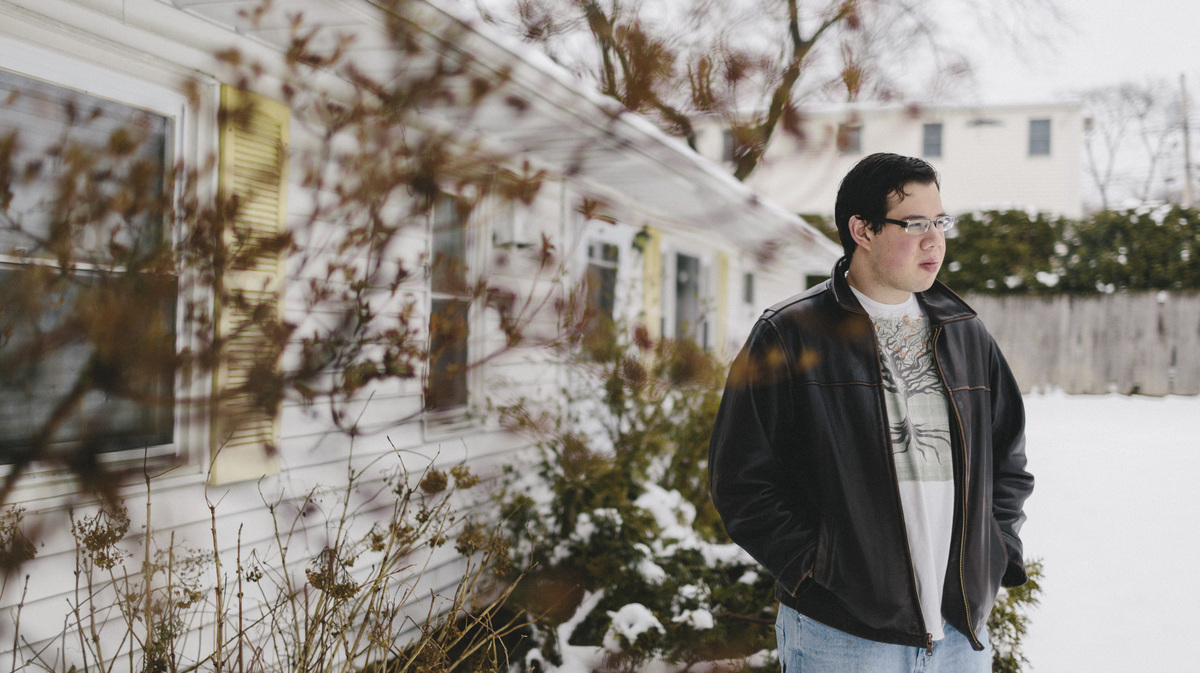 George McCann has been diagnosed with a subtype of bipolar disorder called the "fear of harm" profile, and finds that a prescribed dose of ketamine every few days alleviates his symptoms.

As far back as he can remember, George McCann lived in fear. When he was asleep he would have horrific nightmares filled with violent images. When he was awake, he often felt threatened by people, including members of his own family. And when he felt threatened, he would become aggressive, even violent.

George spent his childhood certain that something very bad was going to happen. And when he was 12, it did. His unrelenting fears led to a violent outburst at school. And George landed in a psychiatric hospital.

It was a frightening place for a fearful kid. When staff members tried to restrain him during a confrontation, he fought as if his life were at stake. George was big and strong for his age. But it was no contest.

Today, George is 22 and back at home with his parents, two younger siblings and a dog named Tressel. They live in a small, single-story house within commuting distance of Manhattan.

When George answers the door, it's clear he's grown into a big, sturdy guy. He wears rimless glasses and slightly rumpled clothes. His handshake is surprisingly gentle.

George's passion is movies, which he reviews on his blog. He has even written a couple of scripts. One is a Western. "It's about redemption and whether people can find it or not," he says.

Sitting on the living room couch with his mother, Cydney McCann, George explains how his own redemption came in the form of an inquisitive psychiatrist and the experimental use of a drug called ketamine.

George's struggles with fear and rage started before he could talk. His mother realized early on that her son was nothing like his cousin the same age. 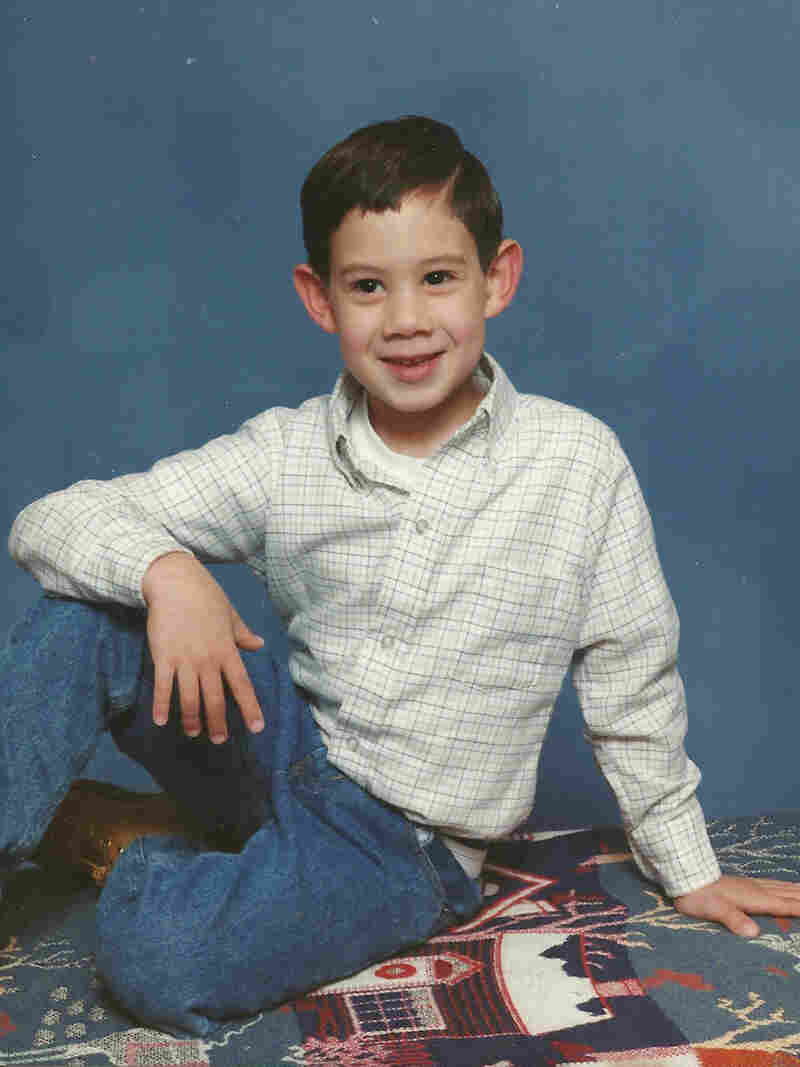 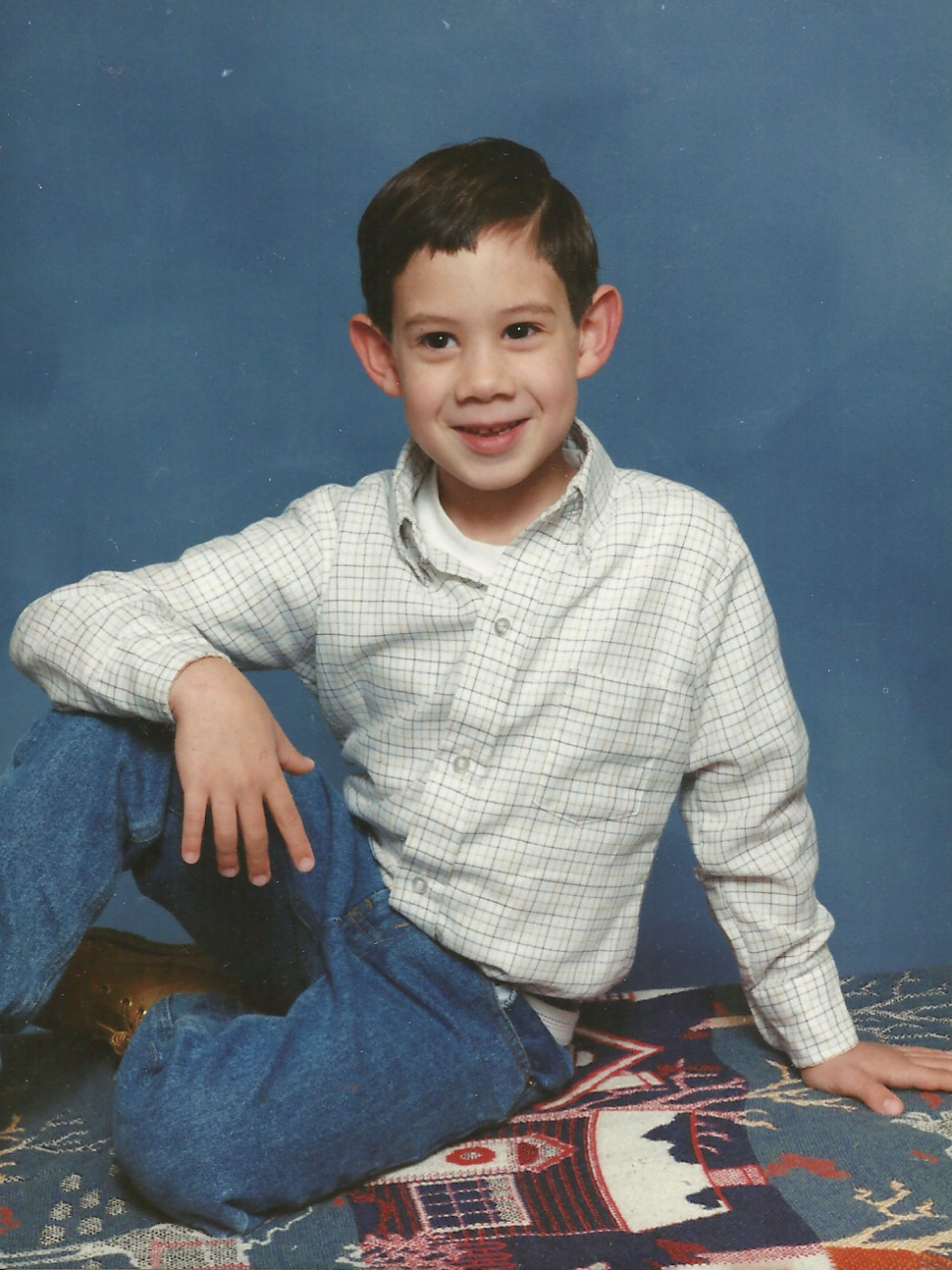 George's tantrums were extreme. A simple "no" could touch off hours of screaming and biting and kicking, Cydney says. Her son's anxieties were also extreme.

At home, his tantrums grew into rages, Cydney says. Then, once the episode was over, her son would apologize and feel intense shame and guilt. She realized just how desperate he had become one day when he was 5.

Cydney began taking her son to psychologists and psychiatrists. They told her he had obsessive compulsive disorder and ADHD. Eventually, during his stay in the psychiatric hospital at age 12, he was diagnosed with bipolar disorder.

All the diagnoses came with drugs: Zoloft, Paxil, Ritalin. "I remember a lot of pills with different colors," George says. But they didn't make him much better. And some made him worse.

By the time George was a teenager, he'd become the patient of Demitri Papolos, a psychiatrist who was studying kids with similar problems. Papolos is director of research at the Juvenile Bipolar Research Foundation and a researcher at the Albert Einstein College of Medicine. He's also the author of The Bipolar Child.

Papolos believes children like George have a subtype of bipolar disorder that he calls the "fear of harm" profile.

That's a controversial idea. The mental health world is debating which children should even be called bipolar. And there's no consensus on what to call kids like George McCann. But Papolos says studies suggest there are hundreds of thousands of them — though many have milder symptoms than George. 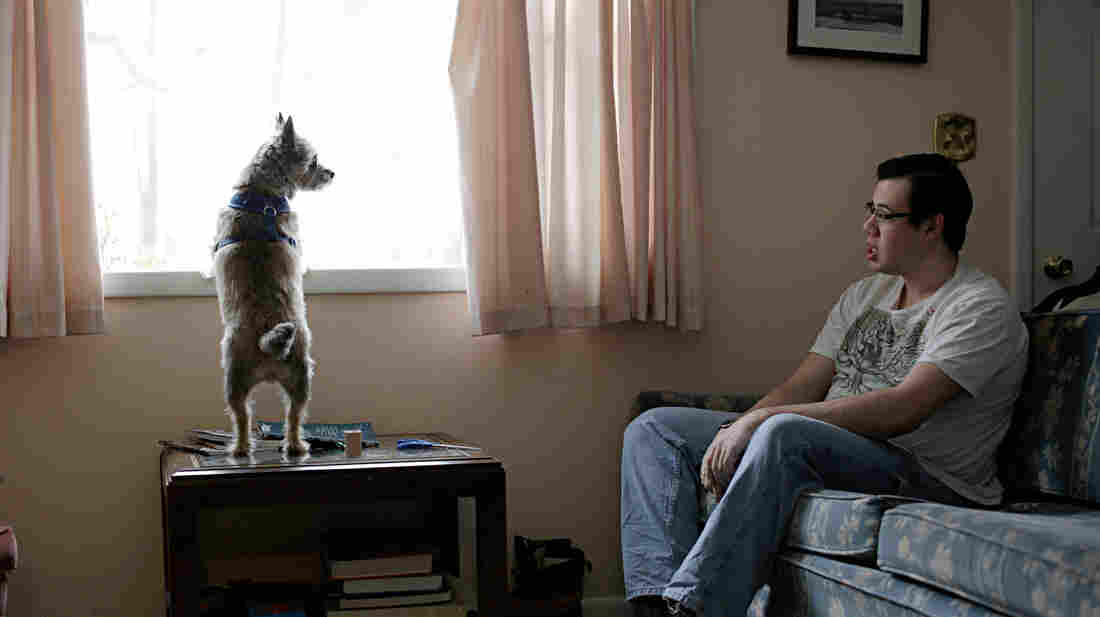 McCann is passionate about movies, and is working on a script about redemption. He lives in Hawthorne, N.Y., with his parents, two younger siblings and a dog named Tressel. Michael Rubenstein for NPR hide caption

There are several core characteristics of these children, Papolos says. One is a variety of sleep disturbances including frequent and terrifying nightmares. "They're all about pursuit or abandonment," he says. "Some animal chasing them. A shark biting into their leg, and they feel the blood and the pain."

George McCann had a lot of dreams like that, including one in which his father survived a terrible car accident only to be shot dead.

Another characteristic of kids like George, Papolos says, is an extreme reaction when anyone tries to control their behavior. "They may very well be very aggressive, particularly at home and particularly where there's any limit-setting, because limit-setting is experienced as a threat to them," he says. "They're functioning on a very primitive fight-or-flight level."

When these kids do become violent, it's not premeditated, Papolos says. They're not potential mass killers. They're responding the way an animal might, defending its territory.

That certainly described George as a child, says Cydney McCann. "The reaction would be like an instantaneous thing," she says. George describes his response as "zero to 100 in a millisecond."

But after such an episode is over, these children can be sweet and loving, Papolos says.

There's one more characteristic of the "fear of harm" profile that's not about behavior at all. These children overheat easily, Papolos says, especially at night.

Once again, George McCann fits the profile. He says he often put an ice pack on his head to help him get to sleep.

After studies showed that these children seemed to be a distinct group, Papolos began wondering whether there might be a better way to treat them. He knew the usual drugs for depression and anxiety and mania weren't enough. So he began looking for a medicine that could reduce fear and simultaneously lower body temperature.

"And lo and behold there were animal studies showing that ketamine did just that," he says.

Ketamine is approved as an anesthetic. It's also a club drug that can cause out-of-body experiences. And research in the past few years shows that ketamine can lift severe depression, often in a matter of minutes.

Papolos thought it just might help the fearful children he was studying. He had a particular child in mind: a 7-year-old girl who had severe nightmares, night terrors, separation anxiety and psychotic symptoms. And, by chance, this little girl was scheduled for a dental procedure that can be done using an inhaled form of ketamine as the anesthetic.

"She got ketamine, and for two weeks she was completely asymptomatic," Papolos says. "We had never seen anything like it before." That was five years ago. Today, the girl is still taking ketamine and is still free of symptoms, Papolos says.

After a number of successes with ketamine, Papolos discussed the drug with George and Cydney McCann. By this time, George was in high school and his moods were less extreme. But fear still dominated his life. He was terrified by subway rides. He was too frightened to drive a car.

So when Papolos offered the drug, Cydney McCann wanted George to try it. She didn't want the disorder that had shaped her son's childhood to hold him back as an adult. But George, who still lived in fear of so many things, was afraid to try the new drug.

"I'm going to become some kind of addict," he remembers thinking. "I'm going to die the first time I take this. It's going to change who I am."

But in 2010, George did try Papolos' ketamine treatment. He says he'll remember the day for the rest of his life. "I think we did two puffs, and I remember I sat up and I just started laughing," he says. Then his mother picks up the story: "You said you had an internal feeling of calm that you had never had before in your life. And when we came home that night, that was the first night that we ever all had dinner at the table without somebody leaving."

Papolos has treated about 60 young people with ketamine so far and says all but two have had dramatic responses. Interestingly, he says, the two whose behavior did not change were also the only patients whose overheating problems weren't helped by the drug.

It's a surprising and provocative result. But the research is still in its very early stages. The number of patients treated so far is small, and the approach is so new it hasn't been tested by other researchers yet. Papolos says he's hoping a study he published late last year will help persuade other researchers to try the drug on other children.

In the meantime, George McCann continues to inhale a prescribed dose of ketamine every third day. The fear and anger that once dominated his life are gone, he says, adding that his mind is free now to work on that movie script about redemption.