Accessibility links
Mining Books To Map Emotions Through A Century : Shots - Health News Anthropologists find that the use of "emotional" words in all sorts of books has soared and dipped across the past century, roughly mirroring each era's social and economic upheavals. And psychologists say this new form of language analysis may offer a more objective view into our culture. 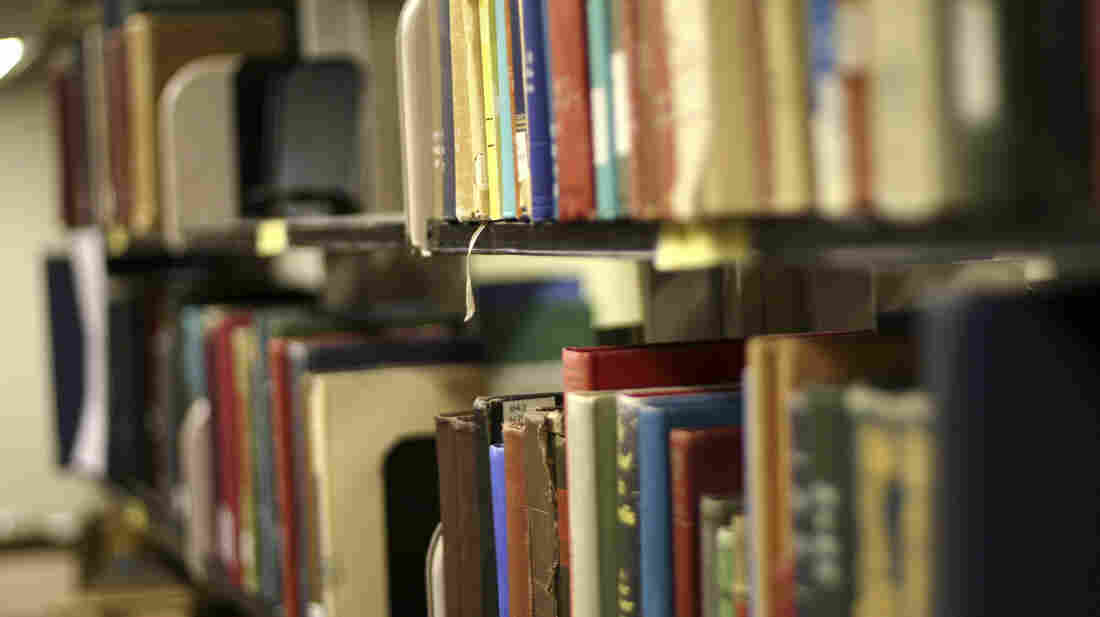 When anthropologists tallied the use of emotional words through a century of literature, they included many books without clear emotional content — technical manuals, for example, and automotive repair guides. Steve Debenport/iStockphotography hide caption

Were people happier in the 1950s than they are today? Or were they more frustrated, repressed and sad?

To find out, you'd have to compare the emotions of one generation to another. British anthropologists think they may have found the answer — embedded in literature.

Several years ago, more or less on a lark, a group of researchers from England used a computer program to analyze the emotional content of books from every year of the 20th century — close to a billion words in millions of books.

This effort began simply with lists of "emotion" words: 146 different words that connote anger; 92 words for fear; 224 for joy; 115 for sadness; 30 for disgust; and 41 words for surprise. All were from standardized word lists used in linguistic research.

The original idea was to have the computer program track the use of these words over time. The researchers wanted to see if certain words, at certain moments, became more popular. 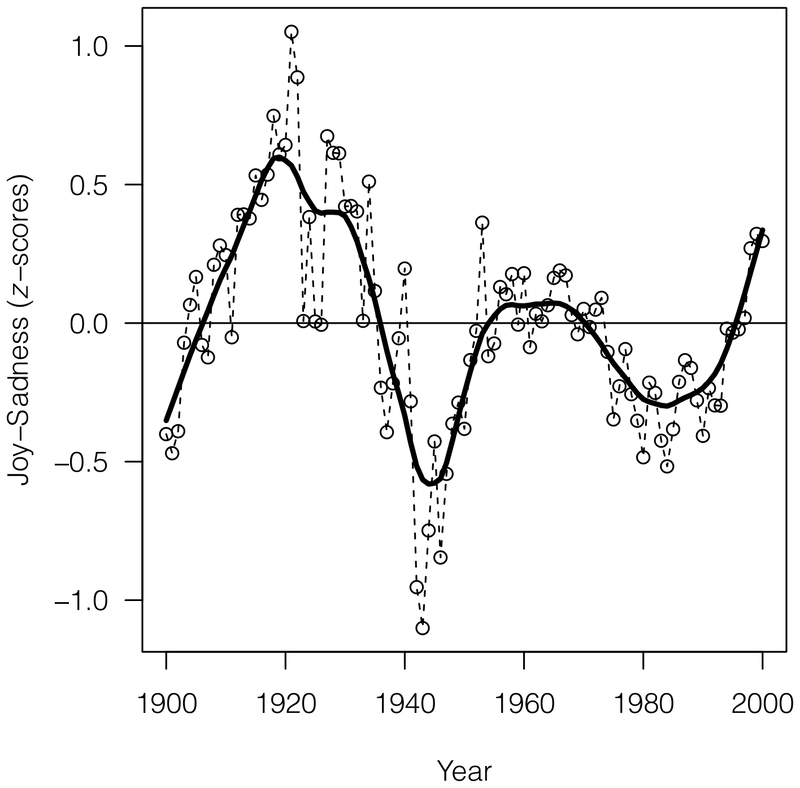 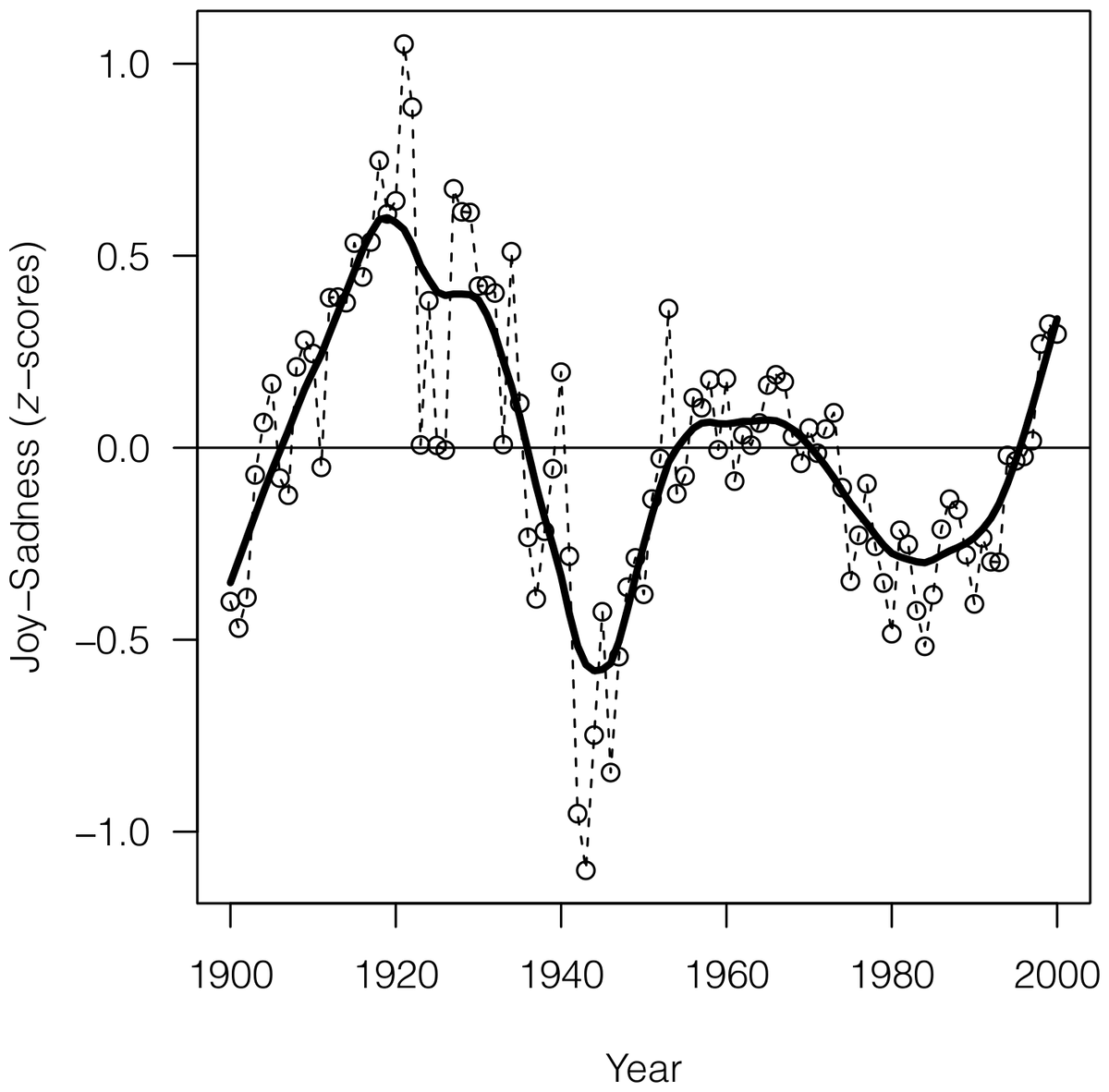 But Alex Bentley, an anthropologist at the University of Bristol involved in the research, says no one expected much when they set their computers to search through one hundred years of books that had been digitized by Google.

"We didn't really expect to find anything," he says. "We were just curious. We really expected the use of emotion words to be constant through time."

Instead, in the study they published in the journal PLOS ONE, the anthropologists found very distinct peaks and valleys, Bently says. "The clarity of some of the patterns was surprising to all of us, I think."

With the graphs spread out in front of him, Bentley says, the patterns are easy to see. "The '20s were the highest peak of joy-related words that we see," he says. "They really were roaring."

But then came 1941, which, of course, marked the beginning of America's entry into World War II. It doesn't take a historian to see that peaks and valleys like these roughly mirror the major economic and social events of the century.

He found that interesting because the books the computers searched in the Google database included an incredibly wide range of topics. They weren't just novels or books about current events, Bentley says. Many were books without clear emotional content — technical manuals about plants and animals, for example, or automotive repair guides.

Which brings us to the most surprising finding of the study: We think of modern culture — and often ourselves — as more emotionally open than people in the past. We live in a world of reality television and blogs and Facebook — it feels like feelings are everywhere, displayed to a degree that they never were before. But according to this research, that's not so.

"Generally speaking, the usage of these commonly known emotion words has been in decline over the 20th century," Bentley says. We used words that expressed our emotions less in the year 2000 than we did 100 years earlier — words about sadness and joy and anger and disgust and surprise.

In fact, there is only one exception that Bentley and his colleagues found: fear. "The fear-related words start to increase just before the 1980s," he says.

So what does this tell us? Should we trust it? Could it be that our own sense of ourselves, and how emotionally open we are, is somehow wrong? Bentley says he has no explanation. "We were just so surprised at this result that we just wanted to publish it to show people," he says. "It's such a fascinating thing; I'm excited just to hear other people's interpretations of this data."

"Certainly the general strategy is a really promising way for us to think about emotions in history," says James Pennebaker, a psychologist at the University of Texas, Austin, who has also done language studies on big databases like this. But such analyses are complicated, he says, and it may still be "a little early to know" whether the use of emotional words has actually declined.

For psychologists, he says, there are only a handful of ways to try to understand what is actually going on with somebody emotionally.

"One is what a person says," Pennebaker explains, "kind of the 'self report' of emotion. Another might be the physiological links, and the third is what slips out when they're talking to other people, when they're writing a book or something like that."

For years, psychologists like Pennebaker have worried that self report does not always accurately reflect what's going on with someone, and physiological measures are hard to get.

That's why this language analysis seems so promising to him — as a new window that might offer a different, maybe even more objective, view into our culture. Because, he says, it's difficult for people today to guess the emotions of people of different times.

"Our current emotional state completely biases our memories of the past and our expectations for the future," Pennebaker says. "And, using these language samples, we are able to peg how people are feeling over time. That's what I love about it as a historical marker, so we can get a sense of how groups of people — or entire cultures — might have felt 10 years ago, or 100 years ago."

It's a kind of emotional archaeology, from traces left behind by words.