Accessibility links
In South Jersey, New Options For Primary Care Are Slow To Take Hold : Shots - Health News Residents of an apartment building in Camden, N.J., racked up more than $1 million a year in hospital admissions and trips to the ER over about a decade. In response, a community group opened a doctor's office on the ground floor. But at first, residents weren't as eager to go as doctors had hoped. 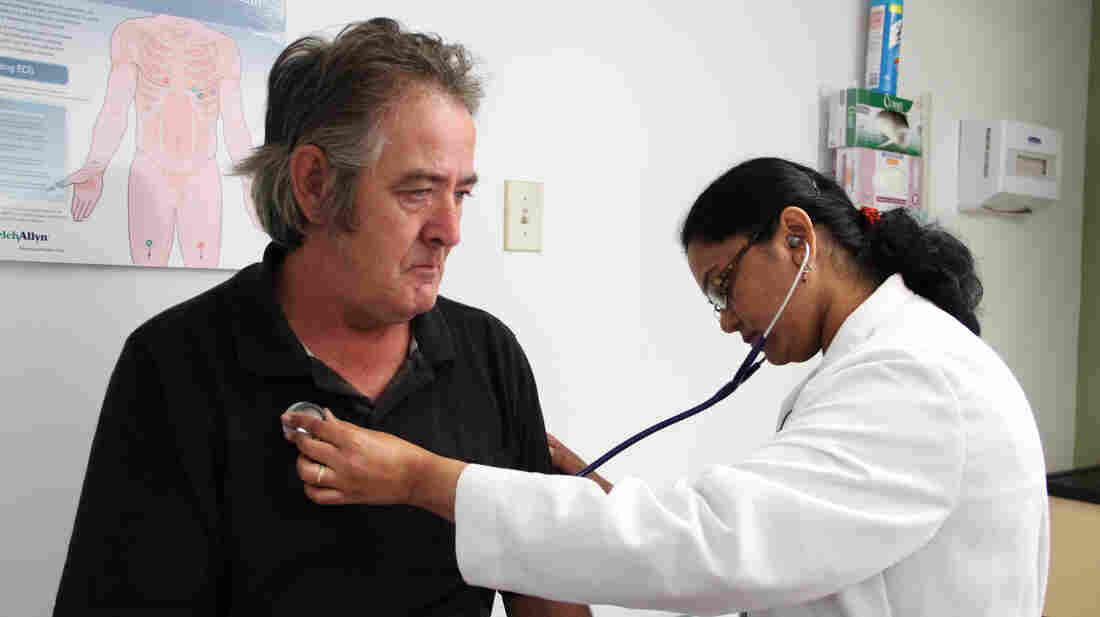 Camden, N.J., has serious health problems, with too many people going to local emergency rooms unnecessarily. But progress is being made, albeit slowly.

John Pike, 53, is a Camden resident who used to be a frequent flier at the ER.

Pike has a smoker's cough, and when that cough or pain in his bad hip flared up, he'd go to the ER — maybe eight or nine times a year. But when he did, ER staffers didn't really remember him or his medical history.

"You get the feeling you are irritating them," he says. "It would be a simple problem. I'm wasting their time, where they could be dealing with a real emergency."

Once, he says, an ER nurse pulled him aside and said, "This is something your doctor can deal with."

"Not much I could say, because she was telling the truth," he says.

But Pike didn't have a primary care doctor until a community group called the Camden Coalition of Health Care Providers opened a doctor's office right inside Pike's apartment building.

Ken Gross, director of research and evaluation for the coalition, says the idea was to get "super users" like Pike to stop going to the hospital so frequently.

Gross leads a team of health-data detectives at the coalition. For several years, they gathered hospital billing information from across Camden. Then they mapped the data block by block.

It turns out that Pike's building is marked as a bright-red "hot spot" on the map. Pike and his neighbors at the Northgate II building had racked up more than $1 million a year in hospital admissions and trips to the emergency room over about a decade.

These days, Pike rides an elevator to the doctor, just six floors down from his apartment. The space is bare bones, with just two exam rooms and a tiny file office, but Pike has his own doctor now — Dr. Madhumathi Gunasekaran.

"I feel comfortable with her. I can talk to her; she doesn't shove you off like some doctors," Pike says.

Dr. Jon Regis is a longtime member of the Camden coalition. His company, the Reliance Medical Group, operates 21 offices across New Jersey, including the practice at Northgate II. The subsidized housing there is home to many low-income seniors and people with disabilities. Many people who live in Northgate II now see Gunasekaran for checkups and other medical issues. But Regis says it took longer than he had hoped to win over residents — almost two years.

"We thought that since they were having such a difficult time, we could just open up the door and they would come down," he says. "That wasn't the case."

Regis says some residents told him they didn't want their neighbors to know they're going to the doctor. But Regis was persistent in trying to get residents to use Gunasekaran instead of the ER.

"We had to do a number of different things, like health fairs and meet-and-greets. We had to engender a sense of trust in the residents before they would come down to see us," he says. "I think that was somewhat surprising. But we're starting to get past that now."

About a year ago, only about 80 people got their primary care at the office. That number has grown to nearly 130, or about 19 percent of the building's residents. It was a slow start, but Regis says he is pleased with the progress.

Reliance uses revenue from private pay and private insurance patients at other office locations to help finance the clinic at Northgate II. This way, he says, "We don't have to turn anybody away, and we've been able to make this work."

This story is part of a partnership with NPR, WHYY and Kaiser Health News