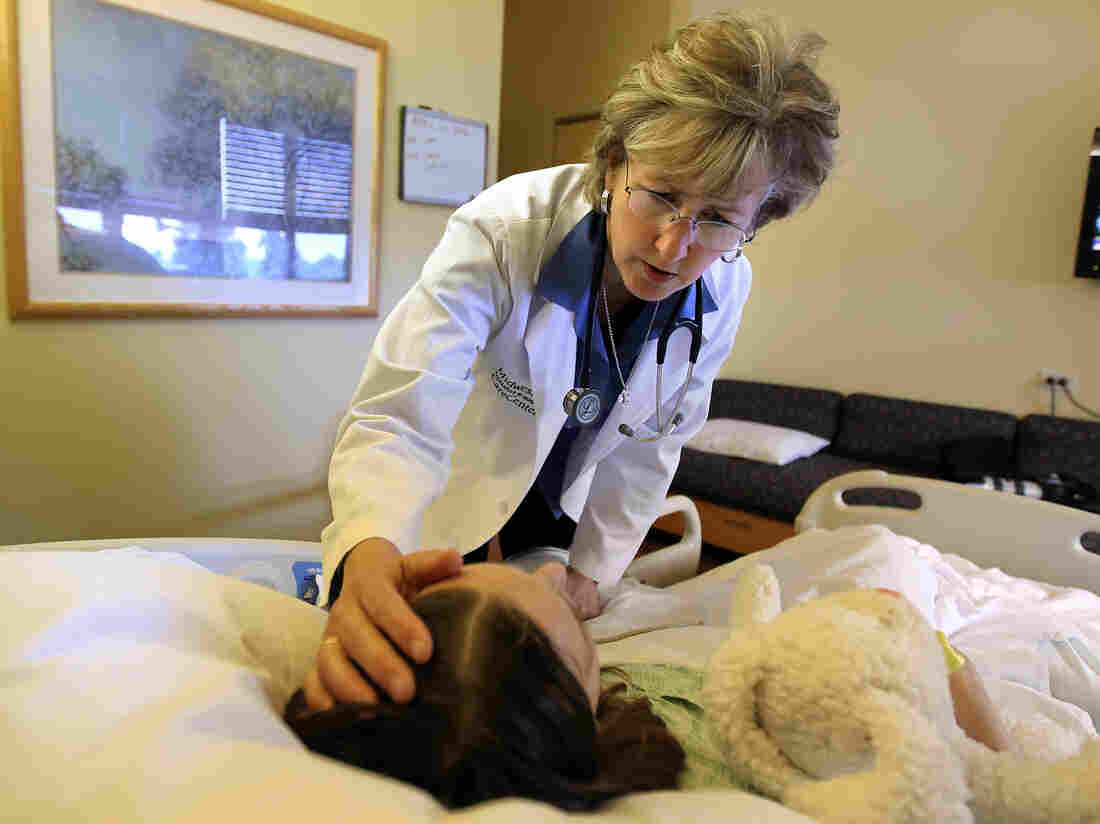 Dr. Martha Twaddle talks to a patient and strokes her hair during a visit at the Midwest Palliative and Hospice CareCenter in Skokie, Ill., in 2012. Antonia Perez/MCT /Landov hide caption 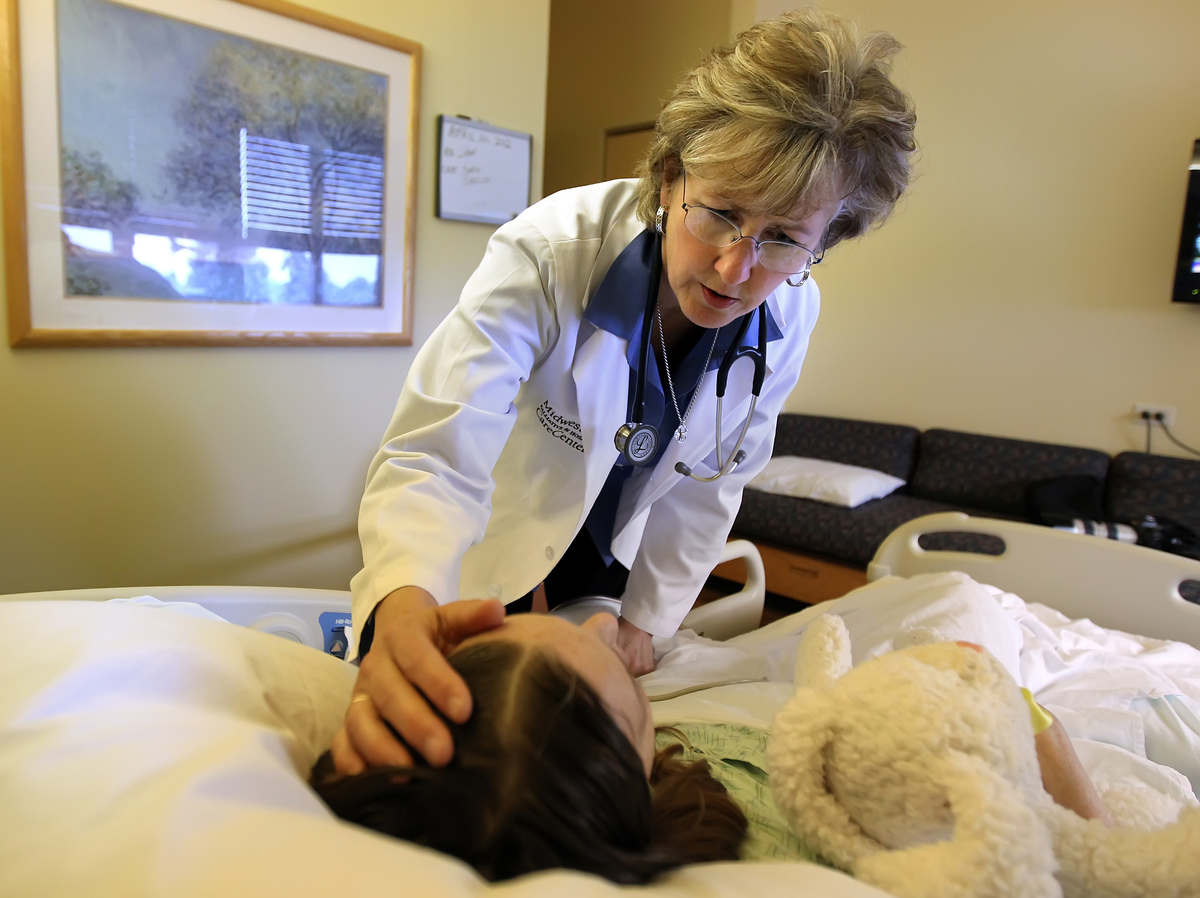 Dr. Martha Twaddle talks to a patient and strokes her hair during a visit at the Midwest Palliative and Hospice CareCenter in Skokie, Ill., in 2012.

Baby boomers have never needed more care to ease their pain and suffering. But there simply aren't enough specialists to get the job done.

There's a shortfall of as many as 18,000 physicians focused on palliative care and hospice care. Right now, there are 5,150 hospice programs and 1,635 hospital palliative care teams in the U.S., according to the American Academy of Hospice and Palliative Medicine.

That means there's only one specialist for every 20,000 older adults living with a severe chronic illness.

"There have to be more people for whom this is a specialty," says Dr. Thomas Smith, director of palliative medicine at Johns Hopkins Hospital in Baltimore. "If you don't have enough people to be out there practicing and showing people a better way to communicate, a better way to relieve pain, a better way to help people's distress, it won't happen."

Patients with many kinds of illness — from chronic to life-ending — can turn to palliative care for help with symptoms. The specialty also spans psychological counseling, help with family conflicts and spiritual support.

The American Board of Medical Specialties defines the subspecialty as "Hospice and Palliative Medicine." Although hospice is most often a home-care service, palliative care consultation services are more common in hospitals or outpatient clinics.

"In Europe or Canada or Australia, hospice care and palliative care are the same thing," says Dr. Porter Storey, executive vice president of the American Academy of Hospice and Palliative Medicine who also works at a palliative care clinic outside Denver. "But in this country, the Medicare hospice benefit has defined hospice care as a wonderful set of services, but only for people in their last six months of life."

Smith says that giving palliative care alongside usual care is now the accepted best practice. "You can show that people live longer, people probably do live better, and their relatives — if they happen to die — do a lot better if you get palliative care involved," he says. "If you have these conversations, people are less distressed and less depressed."

So if palliative care has so much to offer, why aren't there more specialists available to provide it?

Well, Smith notes that specialties like family medicine, geriatrics and palliative care don't pay as well as others. "When you've got an average oncology salary of $360,000 and an average primary care salary of $180,000, which do you think people are going to go into?" he asks.

But Storey says there's actually a lot of interest in the field from doctors, nurses, social workers and chaplains. He's more concerned about a bottleneck that is slowing certification.

"The American Board of Medical Specialties allowed doctors who were already practicing in this field to sit for a certifying exam up until last October, and we had thousands of doctors sit for that exam," he says. "The bad news is that now in order to sit for that exam, you have to do a one-year fellowship and there are only 176 fellowships turning out two fellows a year. So all of sudden, we're down to about 300 doctors a year that we can get board certified."

Nurses are another important part of palliative care teams. Although there are limited data on the short supply of nurses in the area, Storey says that the National Board for Certification of Hospice and Palliative Nurses is "certifying lots more people than we are."

To get more doctors and nurses into the field involves figuring out how to certify more people, how to incorporate hospice and palliative medicine into primary care and other specialties, and how to use nurse practitioners and physicians' assistants more effectively in providing this care. To answer these "hows," Storey hopes Congress can lend a hand with the Palliative Care and Hospice Education and Training Act, which Senators Ron Wyden, D-Ore., and Jack Reed, D-R.I. introduced last month.

The AAHPM-crafted legislation — previously proposed in 2011 and 2012 — would open education centers, train physicians to teach palliative medicine, give training fellowships to mid-career physicians, and award grants and contracts to doctors who enter the specialty, either to teach or practice.

Smith and other doctors are also encouraging specialists like oncologists, cardiologists and surgeons to learn the basic aspects of palliative medicine. In a recent New England Journal of Medicine piece, Drs. Timothy Quill and Amy Abernethy proposed a broader approach in which "the primary care physician or treating specialist could manage many palliative care problems, initiating a palliative care consultation for more complex or refractory problems."

The case for expanding palliative care is now clear, advocates say, especially for difficult cases. "We're going have to pay attention to the most expensive patients and our previous structure has basically rewarded doctors for just doing more and more and more and more stuff," Storey says. "We've now got very good research to show that just doing more procedures and tests on people in their final months of life isn't better. They don't live longer, they're not more comfortable and often the opposite is true."