Accessibility links
The Real Sounds Of Hearing Loss : Shots - Health News For the hearing-impaired, sounds are quieter, but they can also be fuzzier and maddeningly distorted. Listen to these audio clip simulations of what that kind of hearing loss sounds like. 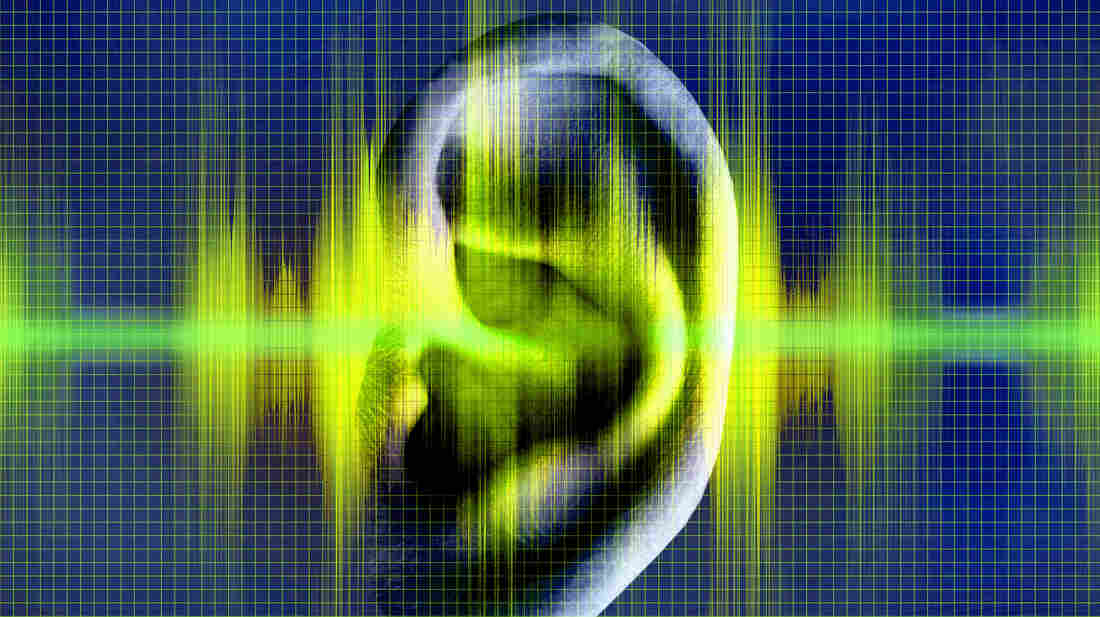 What is it really like to be hard of hearing? Mike Agliolo/Science Source hide caption

It's easy enough to restore 20/20 eyesight with glasses or contacts. But even state-of-the-art digital hearing aids can't perfectly restore hearing for people whose inner ears have been damaged by noise exposure, medications or just the wear and tear of aging.

Part of the problem is that this kind of sensorineural hearing loss — the result of permanent damage to the sensory cells of the inner ear — does more than just make sounds quieter. It can jumble the sounds, too, in ways that garble speech.

To give people with normal hearing an inkling of how wild these distortions can be, hearing and speech researcher Arthur Boothroyd created several audio clips for Shots. Each demo uses the same spoken sentence, but is distorted in a different way. (You can hear the original, undistorted sentence further down in this post. But before you do, take a listen to the demos and try to figure out what's being said.)

First up: Many people, especially those with age-related hearing loss, lose the ability to detect high-frequency sounds. Because consonants are typically higher-pitched than vowels, the loss of high frequencies can make it difficult to tell consonant sounds apart. As a result, speech sounds muddy — in some cases, almost beyond comprehension.

Some people — also, or instead — have trouble distinguishing between different pitches. This happens because of damage to the delicate hair cells in the inner ear and to the nerves connected to them, which are responsible for separating out different frequencies in sound.

Interestingly, many people with hearing loss report that, as sounds get louder, they abruptly go from being inaudible to painfully loud. This rapid increase in perceived loudness is known as "recruitment" because it is thought to be caused by normal hair cells suddenly being recruited to take over for nearby damaged cells.

In these cases, Boothroyd says, the sound cuts in and out because only sounds above a certain volume can be heard.

Could you understand what was being said in those demos? Here's the same sentence without distortion.

Hearing aids can fix some of these issues. For example, the problem of recruitment can be solved by using "amplitude compression," in which the volume of louder sounds is decreased before being passed on to the ear. In the newer digital hearing aids, amplitude compression can even be tailored to specific frequencies. 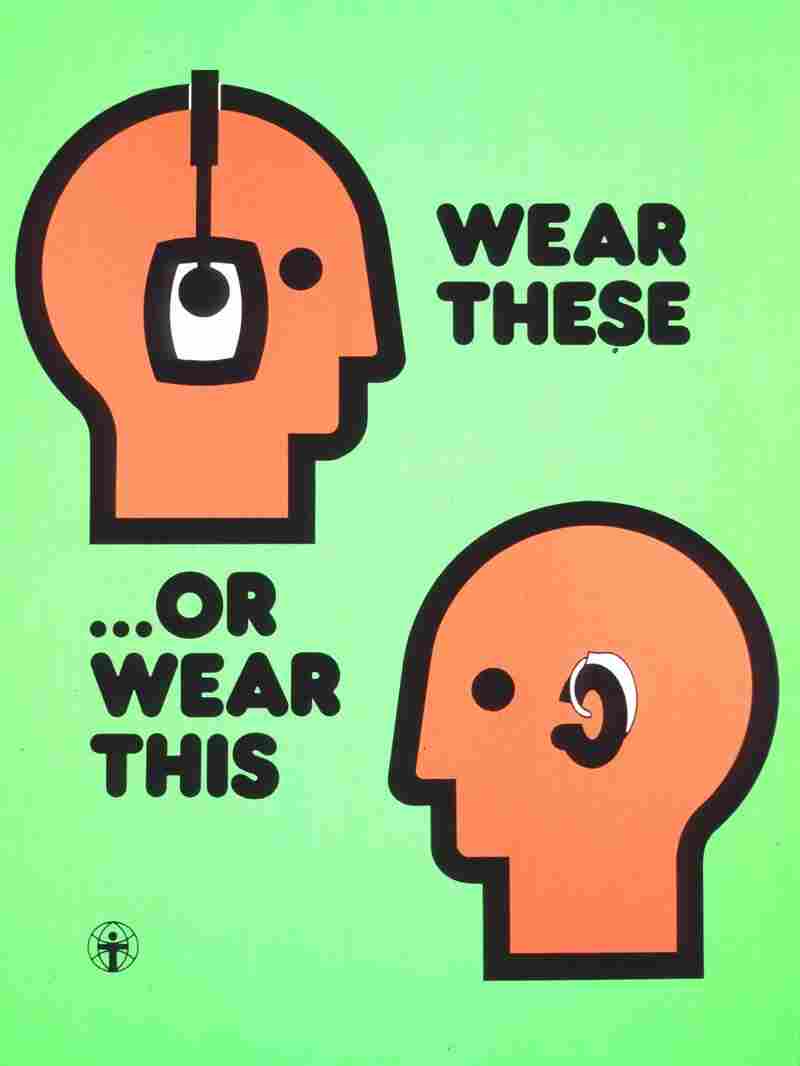 The National Institutes of Health Division of Safety encourages us all to protect our ears. The National Library of Medicine hide caption 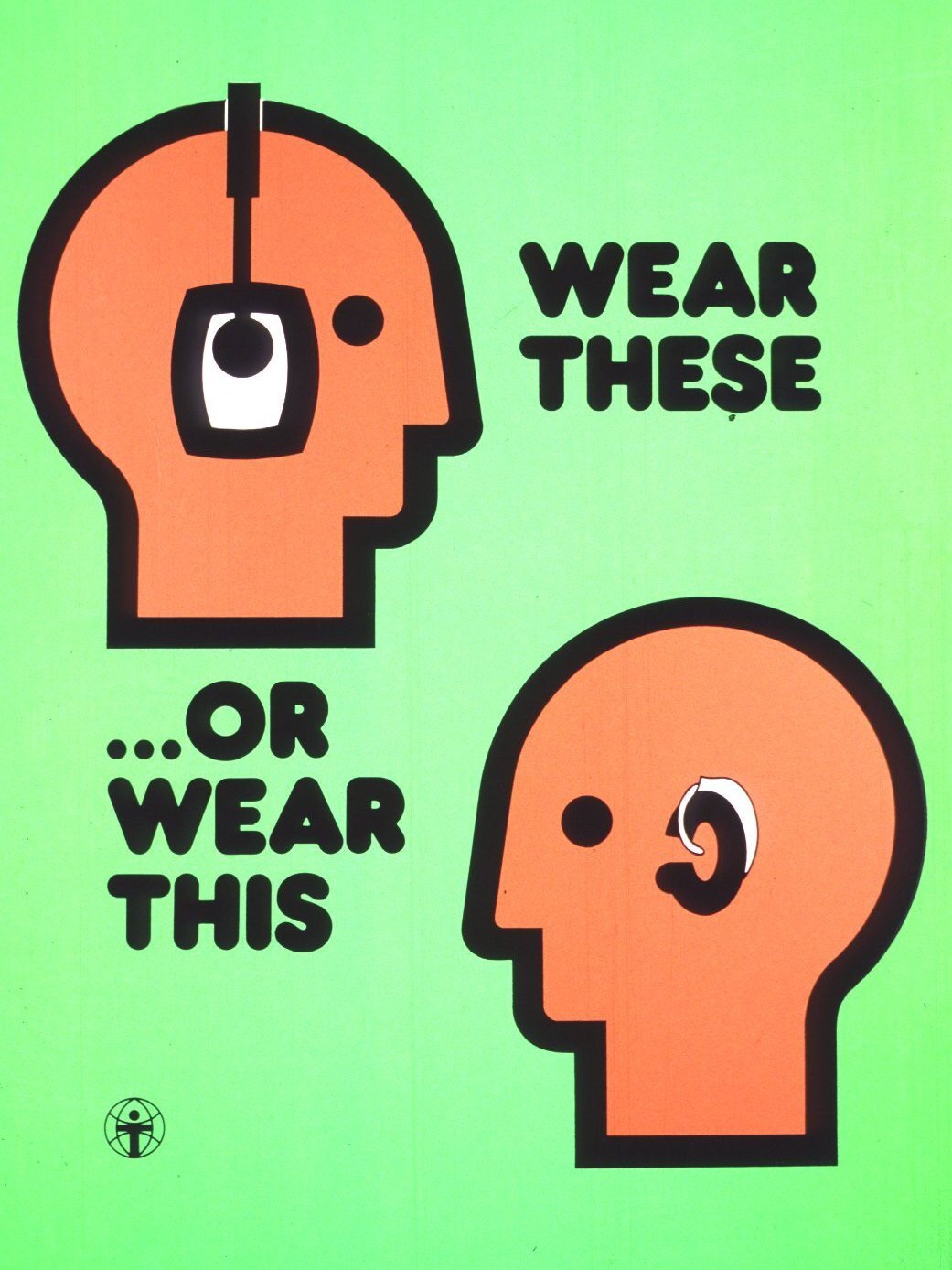 The National Institutes of Health Division of Safety encourages us all to protect our ears.

The National Library of Medicine

Still, even the best hearing aids aren't perfect. Protecting your ears from loud noise is one of the best ways for people of all ages to preserve hearing for life, according to the American Speech-Language-Hearing Association. Even noise from everyday appliances like hair dryers and kitchen blenders can permanently damage hearing over time.

So, how loud is too loud? To protect your hearing, whatever your age, the ASHA advises avoiding situations where you need to shout to be heard. Do what you can at work to limit your time near noisy machinery, and wear protective earmuffs if your job warrants that. Avoid sitting near the speakers at loud performances, and keep the volume down when listening to recorded music, videos or games, especially when listening through earbuds or earphones. And, of course, bust out some attention-grabbing ear plugs when necessary.