Accessibility links
Patent Medicines Get A Belated Chemical Checkup : Shots - Health News Researchers put some old elixirs and pills in the Henry Ford Museum's large collection of patent medicines to a modern test. They found a mix of potentially harmful metals like lead and mercury along with benign ingredients, including calcium and iron. 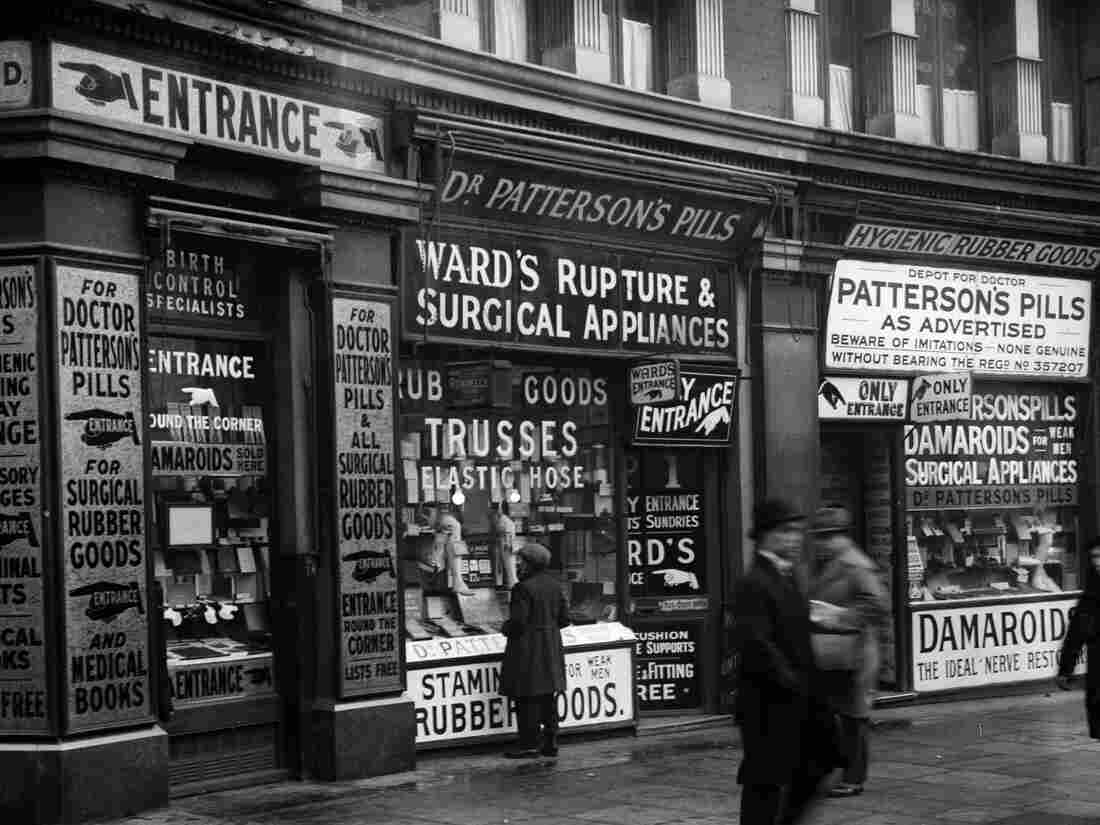 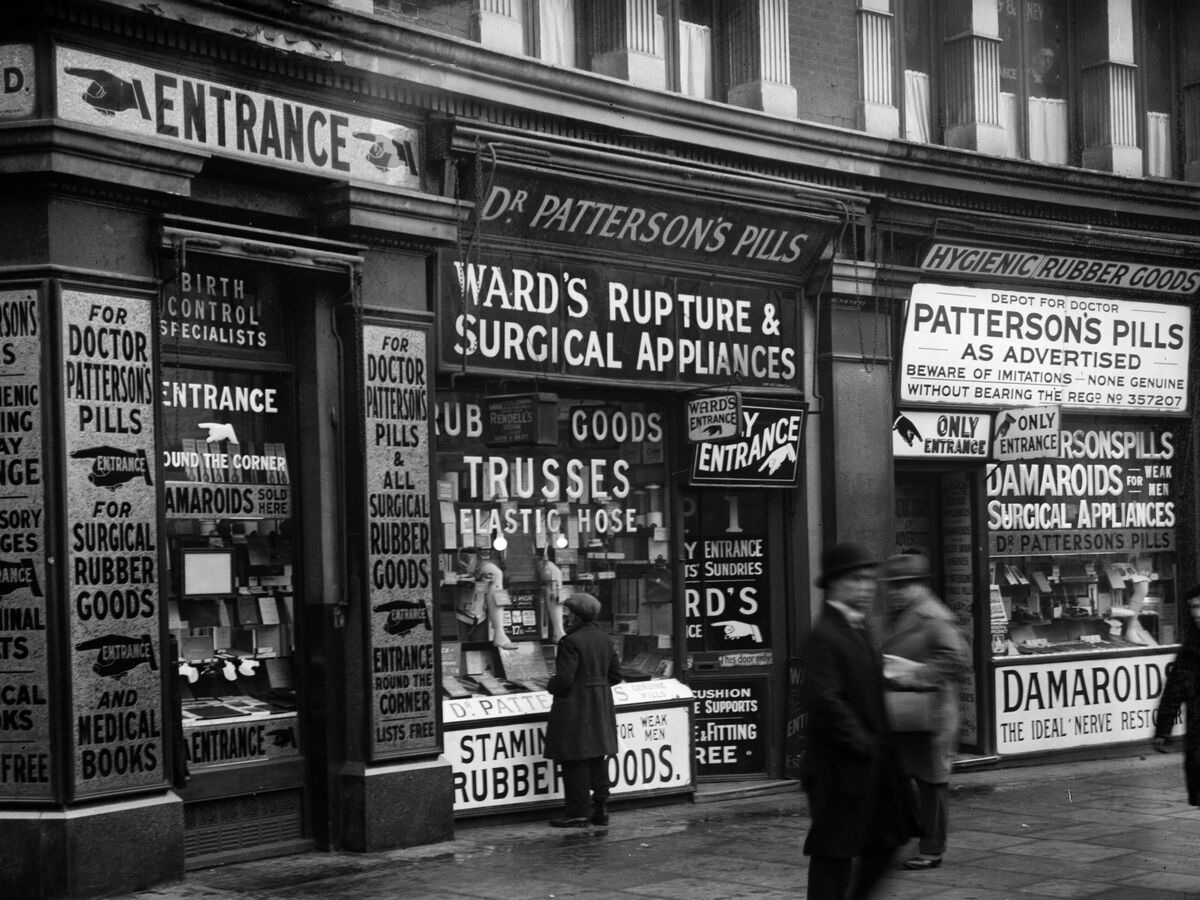 Ads for patent medicines and medical appliances dominate a 1930s storefront in England.

The patent medicines sold in days gone by may, contrary to the name, not have had real government patents. But that didn't stop their makers from claiming the concoctions could cure ailments ranging from indigestion to jaundice and fever.

Now, researchers have put some of these old elixirs and pills in the Henry Ford Museum's large collection of patent medicines to a modern test. They found a mix of potentially harmful metals like lead and mercury along with benign ingredients, including calcium and iron. 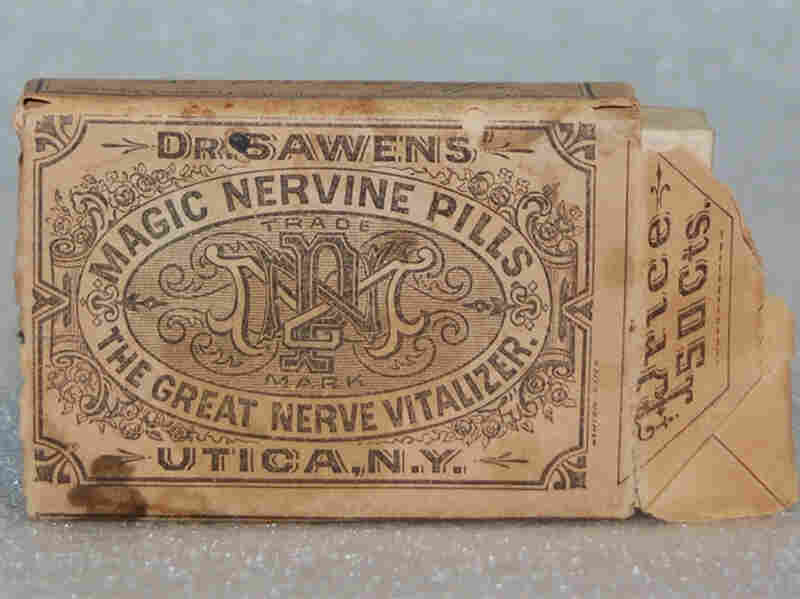 Dr. Sawen's Magic Nervine Pills contained calcium, iron, copper and potassium. Despite advertising claiming they were free of lead and mercury, both elements were found in the pills. Courtesy of Mark Benvenuto hide caption 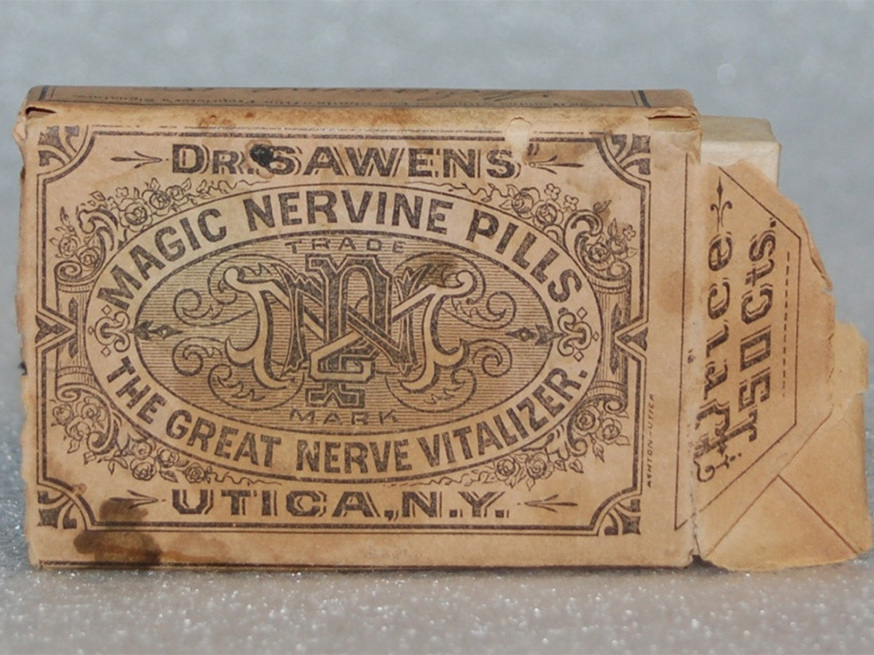 Dr. Sawen's Magic Nervine Pills contained calcium, iron, copper and potassium. Despite advertising claiming they were free of lead and mercury, both elements were found in the pills.

Hundreds of these patent medicines were sold in stores, by mail order and from traveling medicine shows in the late 19th and early 20th centuries. They were called patent medicines because people put their names on them. Take, for instance, Hollister's Golden Nugest Tablets and Dr. Sawen's Magic Nervine Pills.

"Before the creation of the Food and Drug Administration in the early 1900s, people could claim to cure anything, and they didn't have to list what was in them," says Mary Fahey, chief conservator and head of preservation at the museum.

Benvenuto and seven of his students at University of Detroit Mercy analyzed studied 25 medicines using energy-dispersive X-ray fluorescence to identify metals and nuclear magnetic resonance to look at all compounds, including carbon-based chemicals, or organics.

So, did the analysis find any of the ingredients actually listed on the label? "It's tough to make that call with the organics," Benvenuto says. "None of them were nice, clean and pure for just one compound. So by NMR, you're going to see all the compounds at once. And the other thing is these things have been sitting in a bottle for 120 years — organics tend to break down."

Because the mixture of organic substances proved to be a challenge, research on them is ongoing. The preliminary results were recently presented at the American Chemical Society's National Meeting & Exposition in New Orleans.

For now, the researchers focused on identifying elements first because they are much less ambiguous. "I found a lot more iron, calcium and zinc than I did mercury and lead," Benvenuto says.

For example, the team found iron, calcium and a little bit of silver and copper in Reynold & Parmely's Female Health Restorative. The pill claimed to contain coffee, ceratrum, nux vomica, pulsatilla, cocculus, cimifuga and chamomile. But just because the researchers weren't able to discern the listed organics in their analysis, doesn't mean they weren't originally included.

And then there was P.P.P. Parson's Purgative Pills which was said to contain aloes, colmel, powdered colocynth, gamboge, soap, mandrake root and peppermint oil. That actually had a significant amount of mercury in them.

Some patent medicines were known to contain other risky ingredients like cocaine and heroin.

The modern chemists aren't able to determine a drugmaker's motive. "I don't know if people were in it just to sell stuff or actually thought they had something that would solve a problem," Benvenuto says. "But if you stop and think about this, what we were analyzing here is kind of a first step into where we've come to today. If you go back to the year 1800, the way people got rid of ailments was a lot of home remedies."

In hindsight, we can say someone had a virus and their body would have dealt with it regardless of what they ingested, he says. So taking a patent medicine and then getting better was just coincidence.

"You and I might say they didn't really do a controlled study on this sort of thing, but no one had really conceived of controlled studies back then," Benvenuto says. "That doesn't mean they cured nothing."