Accessibility links
Seniors In The South Are More Apt To Be Prescribed Risky Drugs : Shots - Health News In many parts of the South, more than one-third of seniors are taking drugs that they should avoid, an analysis of Medicare data finds. Ten percent are taking two or more potentially problematic medicines. 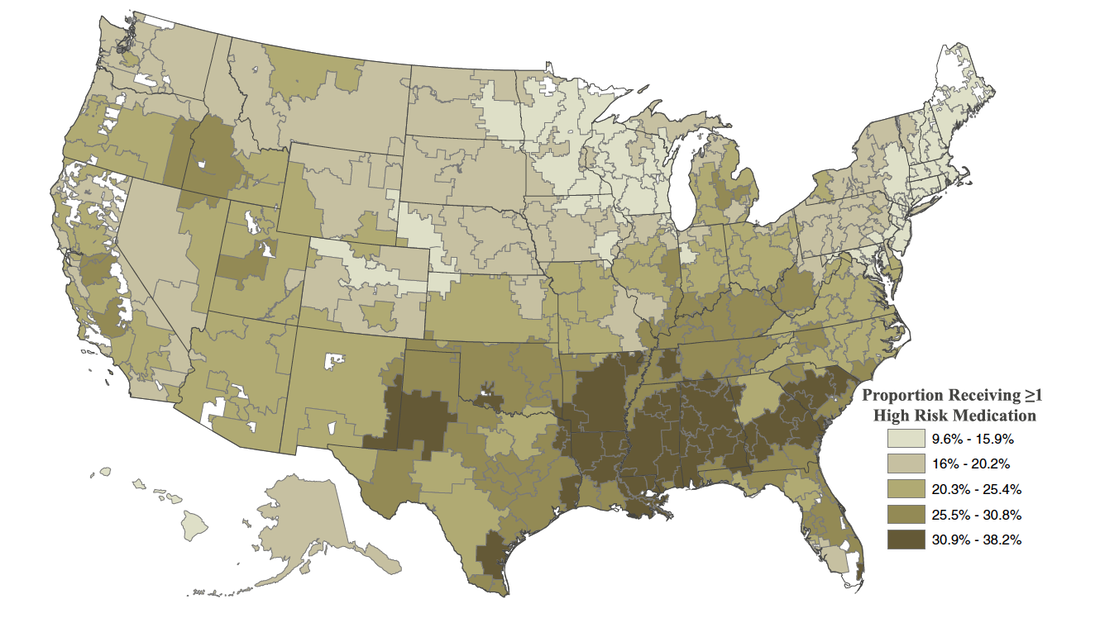 Seniors in the Southeast were much more likely to be prescribed more than one high-risk medications in 2009. Danya Qato and Amal Trivedi/Alpert Medical School, Brown University hide caption 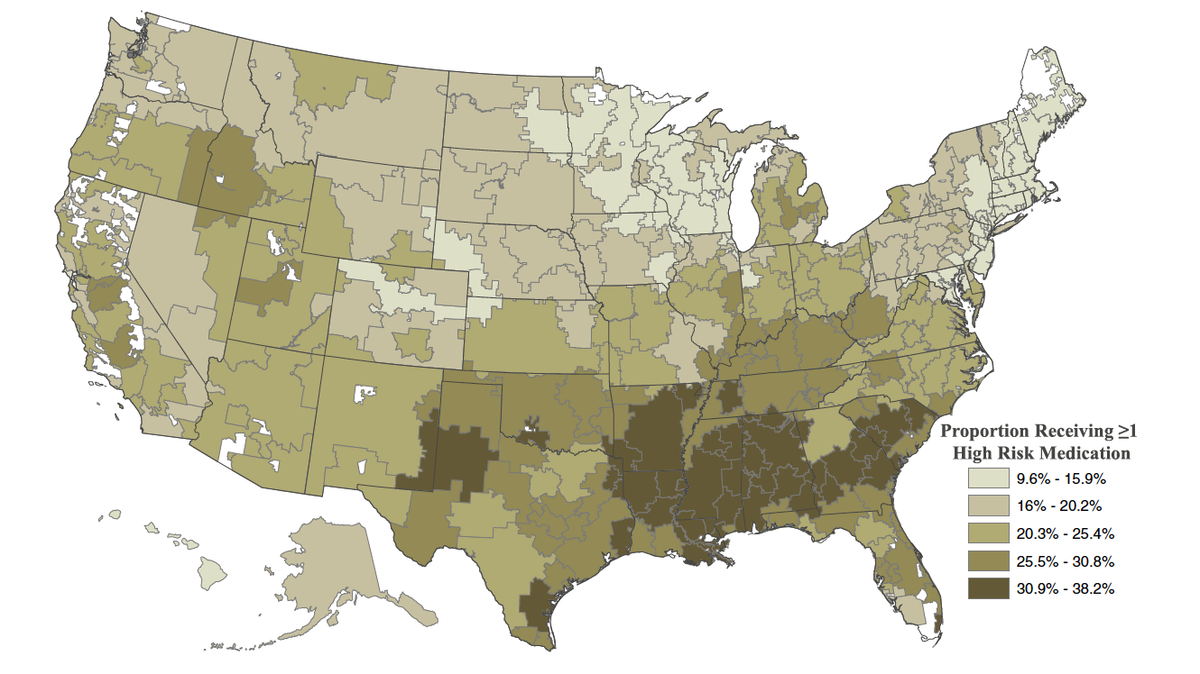 Seniors in the Southeast were much more likely to be prescribed more than one high-risk medications in 2009.

Health care types have spent years trying to make the point that seniors are being prescribed medications that are unnecessary and dangerous. But the message hasn't really sunk in.

More than 20 percent of people with Medicare Advantage coverage are taking at least one high-risk medication, a new study finds.

People in the Southeast are especially vulnerable, the data show. In many parts of the South, more than one-third of seniors are taking drugs that they should avoid or sub out for something safer. Ten percent are taking two or more.

"Geography really stands out," says Amal Trivedi, an associate professor of health services policy and practice at Brown University's Alpert Medical School. He's a co-author of the study, which was published in the April Journal of General Internal Medicine.

More than 38 percent of Medicare Advantage enrollees in Albany, Ga., got at least one risky drug, compared with 10 percent in Mason City, Iowa, the area with the lowest rate. The people prescribed risky drugs were more likely to be poor, white and female.

Why are Southerners more likely to be given risky meds? It could be that patients are asking for them, Trivedi says. Or it could be that doctors there are more apt to stick with old prescribing habits. But whatever the reason, he says, it's a marker for poor-quality health care.

The risky drugs include obvious culprits like amphetamines, barbiturates, muscle relaxants and narcotics. Then there are old-style sedating antihistamines, and medications for depression and anxiety, such as long-acting diazepam, or Valium, which can cause apnea and cardiac arrest. Many of the drugs increase the risk of falls.

"Because the the medication stays in the body longer, it increase the risk of falls and fracture," says Danya Qato, a pharmacist, graduate student and co-author of the study. "If the physician decides to prescribe a benzo, there are short-acting alternatives."

Trivedi was surprised to see that older patients were being prescribed chlorpropamide, a long-acting drug that reduces blood sugar in diabetics. "In younger populations it's fine," Trivedi, an internal medicine physician with older patients, told Shots. But because older people take longer to metabolize drugs, they run the risk of having their blood sugar go dangerously low.

The researchers used the National Committee for Quality Assurance's list of drugs to avoid in the elderly. Doctors should all have this information, but the numbers in this study make it clear that patients and caregivers need to be on the case, too.

People should talk with their doctors about risky medications, Qato says. And they also should make an appointment with their pharmacist, go over their meds list, and ask which drugs are good candidates to be stopped or replaced with less risky products.