Accessibility links
Scientists Race To Stay Ahead Of New Bird Flu Virus : Shots - Health News "The top priority is diagnosis — the capability to be able to pick up this virus, should it emerge outside of China," says virologist John McCauley. Flu researchers are getting started on creating a vaccine, but there are still many unknowns. 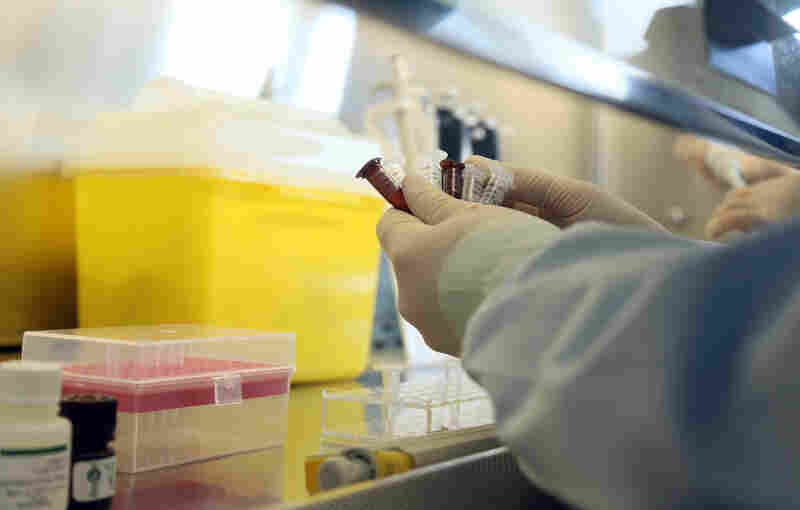 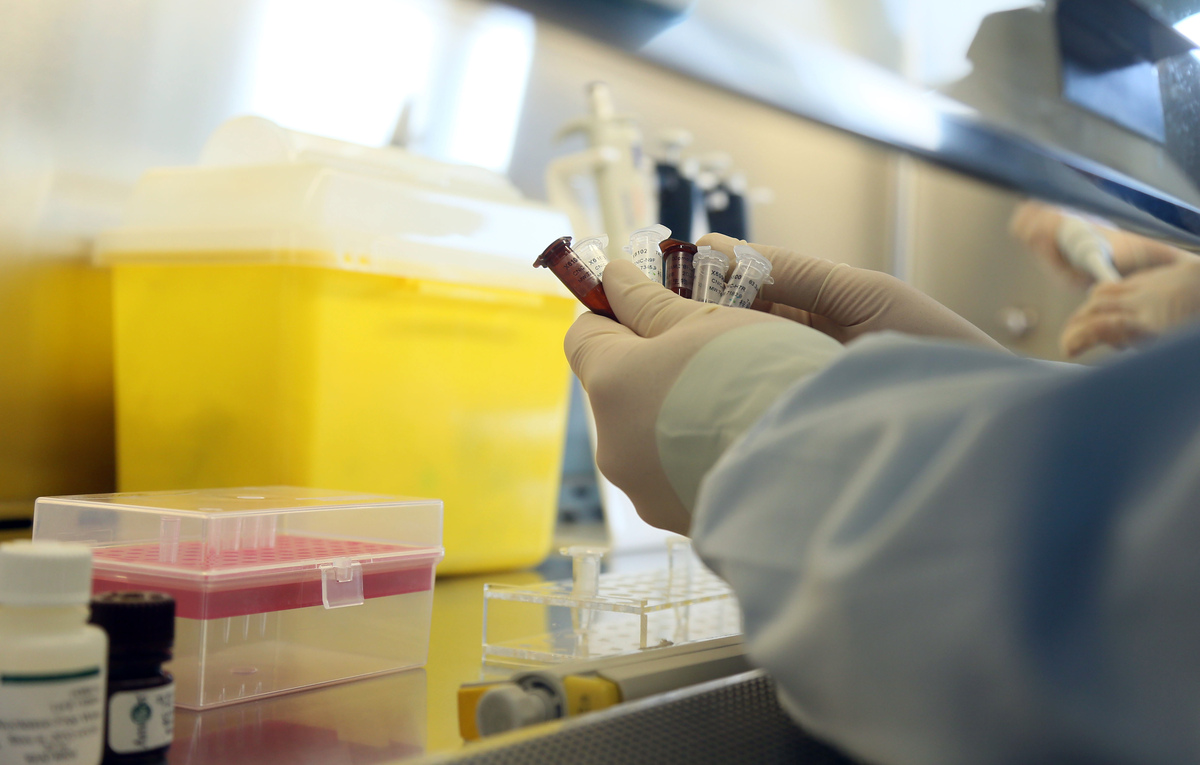 Workers prepare an H7N9 virus detection kit at the Center for Disease Control in Beijing on April 3.

A precious package arrived at the Centers for Disease Control and Prevention last Thursday afternoon.

Inside, packed in dry ice to keep it frozen, was a vial containing millions of viruses derived from a 35-year-old Chinese housewife who died last Tuesday of respiratory and kidney failure.

The package was addressed to the CDC's top flu virologist, Nancy Cox. "Once we got the virus, we took it immediately to the appropriate level of biocontainment," Cox tells Shots.

That would be a so-called biosafety level 3 lab, where researchers can keep this demonstrably dangerous virus under tight control.

"We unpacked it from the various levels of protection — that is, containers in which it is placed in order to ensure that it doesn't spill," Cox says. "And then the work actually began."

There's a lot of urgent work to do, according to scientists in far-flung labs, who also got samples of the virus at the end of last week.

In fact, the urgency increased this weekend with the discovery that a 7-year-old girl in Beijing fell ill with this new bird flu last Thursday. She was the daughter of poultry sellers, and contact with poultry may be the way many people have become infected.

She's reportedly in stable condition, but the fact that the virus has begun to sicken people nearly 700 miles from the epidemic's epicenter in Shanghai is a strong signal that the virus will not be contained to one region of China — and perhaps not to China.

As of Sunday morning, the current caseload of the new flu has climbed past 50, with new cases being reported daily. Eleven people have died, and most of the survivors have gotten severely ill.

In London, virologist John McCauley wants to develop a reliable test to see who's infected with H7N9, as this virus is called. Current tests for human flu viruses don't identify this one.

"The top priority is diagnosis — the capability to be able to pick up this virus, should it emerge outside of China," McCauley says. He directs one of the World Health Organization's "collaborating centers" on influenza.

At St. Jude's Children's Research Hospital in Memphis, flu researcher Richard Webby is getting started on a vaccine against H7N9.

"We'll start preparing some vaccine seed strains against it — you know, just in case," says Webby, director of another WHO collaborating center.

Having a seed strain is the first step in making a vaccine.

Webby and others have already started work on an H7N9 vaccine using so-called "reverse engineering" — starting from the virus's gene sequences, posted by the Chinese on the Internet two weeks ago.

But there are many unknowns about a vaccine against this type of virus. So researchers are taking a belt-and-suspenders approach: They're planning to make vaccine candidates the conventional way, by growing quantities of virus in eggs first, as well as newer, egg-free technologies.

"Think back to the 2009 pandemic, when many of us assumed we were going to need two doses of that H1N1 vaccine to get a good immune response, and it turned out only one was needed," Webby says. "Is this H7N9 vaccine going to require two big doses?"

Since no humans had ever been known to be infected with an H7N9 virus before now, scientists worry that a vaccine might not induce as strong an immune response as, say, a vaccine against an H1 strain, where people are already primed to respond.

At the CDC, scientists have a long to-do list of H7N9 research projects.

Cox, the flu virologist, plans to infect ferrets, weasel-like mammals considered close to humans in the way they respond to flu viruses. She especially wants to see if ferrets can pass this virus to other ferrets.

She also wants to make an antibody test, which will enable scientists to tell if people close to the known cases in China have been infected without getting seriously ill.

There are many mysteries to solve. One of the most puzzling is how H7N9 has infected people in such a broad area of southeast China.

Poultry and wild birds are currently the only known source of infection. But last week, the Chinesereported only 14 infected birds tested in five different markets. A separate report indicated H7N9 in 2 out of 10 ducks in Zhejiang province, one of the affected areas. Clearly, testing of domestic poultry as well as wild birds is just getting underway.

"It does look as if infected poultry have dispersed throughout this large area of roughly 400 by 400 miles," says Marc-Alain Widdowson, who is in charge of tracking the infections at the CDC. "And it's likely, I think, that there will be more cases in adjacent provinces in the weeks to come."

Widdowson tells Shots it's hard to know how H7N9 is jumping from chickens to humans, "exactly which part of the processing — slaughtering, buying, preparing, eating — is particularly high-risk."

He notes that most of the cases have been in urban areas. That differs from H5N1 bird flu patterns, where many of the 600 or so human cases identified since 2003 have been in people with close, prolonged exposure to infected poultry. The discrepancy makes him suspicious that kitchen exposures to H7N9 might be important.

So far, pigs have not been found to harbor H7N9, which is a good thing, since pigs can be infected simultaneously with bird, swine and human viruses. Harboring all those different viruses allows the swapping of genes and generation of entirely new viral strains. "It would be rather bad news if the H7N9 virus were to be found in pigs," Cox says.

Cases of H7N9 have been increasing at a faster pace than cases of H5N1, which researchers have been watching closely for more than 10 years. But Widdowson says cases of this new virus may soon go up even more rapidly because the Chinese have begun testing people for it nationally.

So far he's reassured that monitoring of around 1,000 close contacts of H7N9 cases hasn't turned up firm evidence that this virus can be spread easily.

But that doesn't mean it won't happen.

Webby thinks H7N9 poses a greater threat of becoming transmissible among humans than the H5N1 virus that has caused such prolonged anxiety among researchers. "My gut feeling, at this point in time, is that this guy [H7N9] is probably closer to doing it," he says.

Cox notes the virus already has two genetic changes that enable it to infect human cells and reproduce at human's body temperature, which is lower than birds'.

She says the coming weeks may tell whether H7N9 is only a bird disease that occasionally spills over into humans, the potential seed of a dangerous global flu pandemic, or something in between.