Accessibility links
Supreme Court Asks: Can Human Genes Be Patented? : Shots - Health News Same-sex marriage got huge headlines at the Supreme Court last month, but in the world of science and medicine, the case being argued on Monday is far more important. The lawsuit deals with a truly 21st century issue that in some cases can pit drugmakers against patients. 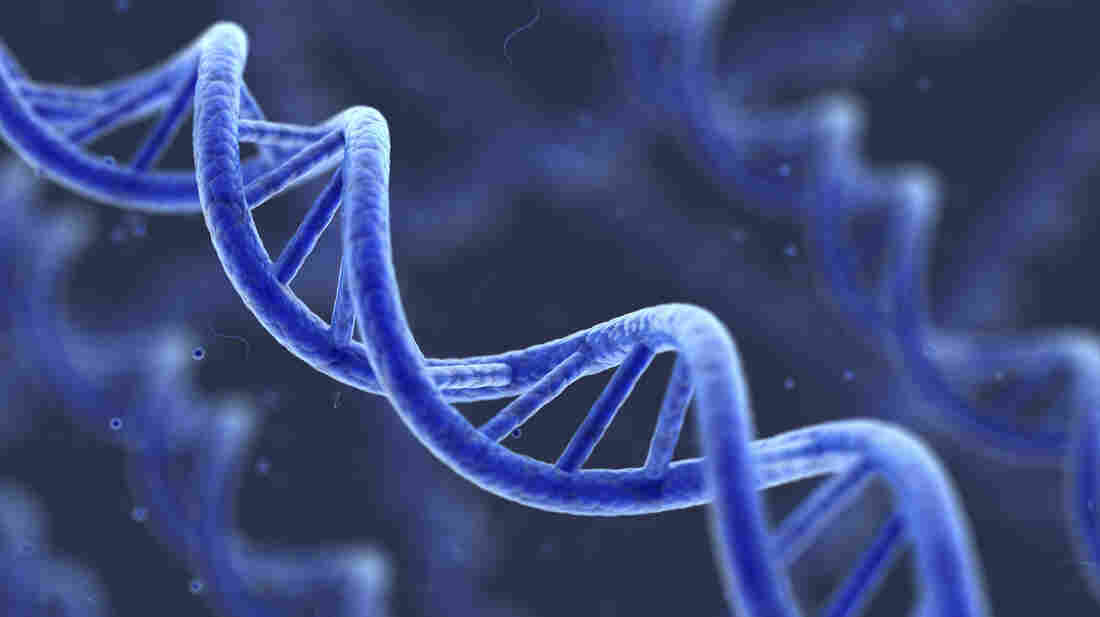 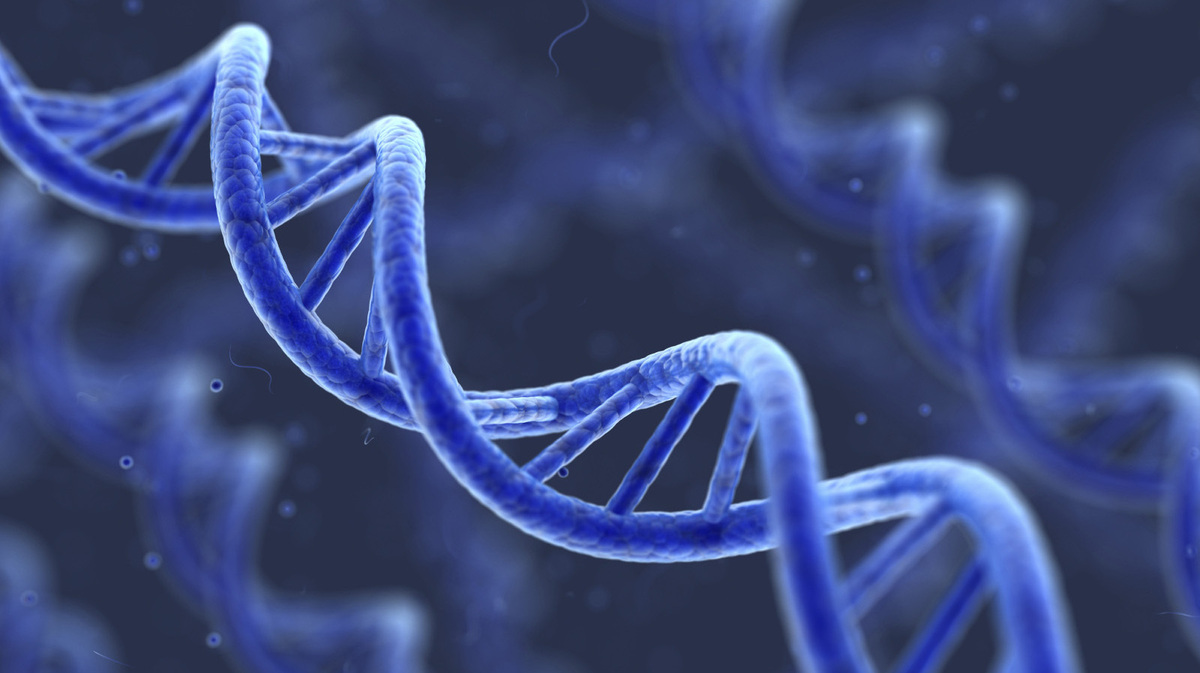 Same-sex marriage got huge headlines at the Supreme Court last month, but in the world of science and medicine, the case being argued on Monday is far more important. The lawsuit deals with a truly 21st century issue — whether human genes may be patented.

Myriad Genetics, a Utah biotechnology company, discovered and isolated two genes — BRCA 1 and BRCA 2 — that are highly associated with hereditary breast and ovarian cancer. Myriad patented its discovery, giving it a 20-year monopoly over use of the genes for research, diagnostics and treatment. A group of researchers, medical groups and patients sued, challenging the patent as invalid.

There is no way to overstate the importance of this case to the future of science and medicine. In the view of Myriad and its supporters in the biotech and pharmaceutical industries, patents are the keys to making these medical discoveries possible. Their opponents, including leading medical groups and Nobel Prize-winning scientists, contend that Myriad's patent improperly puts a lock on research and medical diagnostic testing.

The U.S. patent system, authorized in the Constitution, gives temporary economic incentives to inventors to advance science. The general rules of the patent system have been established in statutes and Supreme Court case law for over 150 years. You can't patent a product of nature or a law of nature. It doesn't matter that the task was difficult or costly. Nature is immune to patents. So, even though it may have taken Einstein a long time to figure out that E=mc2, he couldn't have patented that law of nature.

'Could You Patent The Sun?'

Until relatively recently, much of the medical profession disdained patents, except as a means to ensure quality. When Dr. Jonas Salk, the inventor of the revolutionary polio vaccine, was asked in 1955 whether he had a patent on the vaccine, he replied, "There is no patent ... could you patent the sun?"

Myriad Genetics, however, contends that the genes it isolated are not like the sun. Mark Capone, president of Myriad Genetics Laboratories, notes that the 20,000 genes in the human body are part of a 6-foot-long molecule that's "coiled and compacted and stuffed into each cell." And, he says, "What Myriad was able to do is sort through all those 20,000 genes and find the two that were highly linked to hereditary breast and ovarian cancer."

The gene is like "a single grain of sand" hidden in a building the size of the Empire State Building, says Gregory Castanias, Myriad's lawyer. He will tell the justices that isolating the two genes justifies a patent because "it is the final step in an extraordinarily complicated set of inventive actions that led to the creation of this molecule, which had never been available to the world before."

Castanias, however, contends that by locating the gene and isolating it — snipping it out from the rest of the genetic material — Myriad has created a new and patentable thing. He says it's "no different than allowing a baseball bat or cast iron fence to be patented as a new invention," even though those items "originated in a tree" or a "rock." The baseball bat and cast iron fence are still "human inventions" and thus are patent eligible.

"We do know Myriad did a lot of work," says New York University law professor Rochelle Dreyfuss, a nationally known patent expert who is not associated with either side in this case. But that's not enough, she says, because the court still has to answer this question: "Is the thing that's isolated significantly different from the way that it was when it was in nature?"

Hansen, representing the patent challengers, contends that Myriad is merely following nature's instructions about where to snip out the gene.

What's more, he argues that by patenting the BRCA 1 and 2 genes, Myriad has hampered research by scientists outside the company.

The company disagrees, noting that 18,000 scientists have published more than 10,000 papers on these two genes. "Myriad will not and has not hindered research," says Capone, because "research is incredibly important in understanding the function of these genes and in translating that into patient care."

Some researchers concede that Myriad has not invoked its right to block their research, but they are galled by the fact that Myriad at any point could block their work and that the information they turn up in clinical trials cannot be shared with patients.

Patients are also outraged that they can't get a second opinion on Myriad's test results. They cite, for example, the case of Kathleen Maxian, whose sister was tested by Myriad for mutations in her BRCA 1 and 2 genes after she had breast cancer at an early age. Based on the negative test results, all of the women in the family thought they were not at a heightened risk of breast or ovarian cancer. Two years later, however, Maxian was diagnosed with ovarian cancer, and a different and supplemental test from Myriad revealed that family members did have a mutation in their BRCA genes.

Genetics counselor Ellen Matloff says that scientists learned in the late 1990s and early 2000s that Myriad's test was missing mutations in some families.

"I contacted Myriad Genetics and asked them if we could offer a test for our patients who tested negative but in whom we really suspected we were missing something. And we were told absolutely not, it's a patent violation," she says.

Another bone of contention over the patent is the cost for the test. Myriad charges $3,000 for a test that experts say costs less than $200 to complete.

Myriad's Capone says the company is simply trying to recoup the tens of millions of dollars it invested in researching these two genes alone.

The ACLU's Hansen has a tart reply to that. "A patent isn't a reward for effort. A patent is a reward for invention. And Myriad didn't invent anything," he says. "The gene exists in the body. All Myriad did is find it."

Each side of this case sees the future of science threatened. Those challenging the patent see gene patenting as an attempt to monopolize and block future exploration in the new universe of genetics and personalized medicine.

Myriad and its supporters, however, see patents as the key to exploration. "We believe we're on the cusp of a revolution of how we treat our patients in this country, by translating personalized medicine into the clinic," says Capone. But without "the incentives offered by a strong and stable intellectual property system," Myriad and others like it may not garner the investment and support needed to develop those new treatments and bring them to patients.

Castanias is a little more down to earth.

"At some level it is about money," he says, because "medicine doesn't happen for free. ... If you look at the enormous amount of investment — and not everything works that you invest in — the patent system is critical to medical care" by incentivizing companies to invest in needed scientific research and development.

How do other countries handle this dilemma? Most do grant patents on genes, but they also have exceptions to the patents, allowing researchers to use the genes freely and allowing anyone who can to develop diagnostic tests. That type of an escape valve, however, would require action from Congress.