Accessibility links
Justices Appear Skeptical Of Patenting Human Genes : Shots - Health News A case considered pivotal to the future of science and medicine came before the Supreme Court on Monday, involving a company that has patented two genes linked to cancer. While the patent challengers lost in the lower court, they seemed to have a more receptive audience at the Supreme Court. 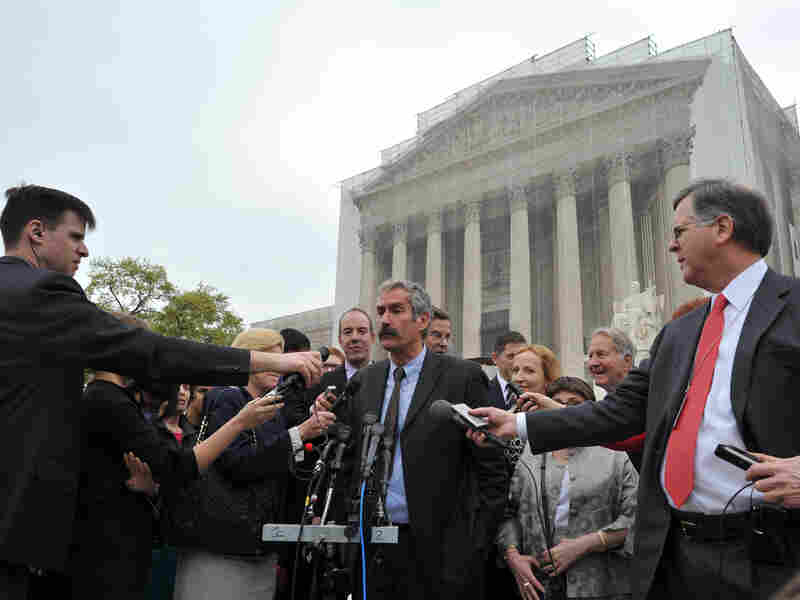 Medical geneticist Dr. Harry Ostrer (center) talks to the press outside the U.S. Supreme Court on Monday. The court heard oral arguments on the highly charged question of whether human genes can be patented. Mladen Antonov/AFP/Getty Images hide caption 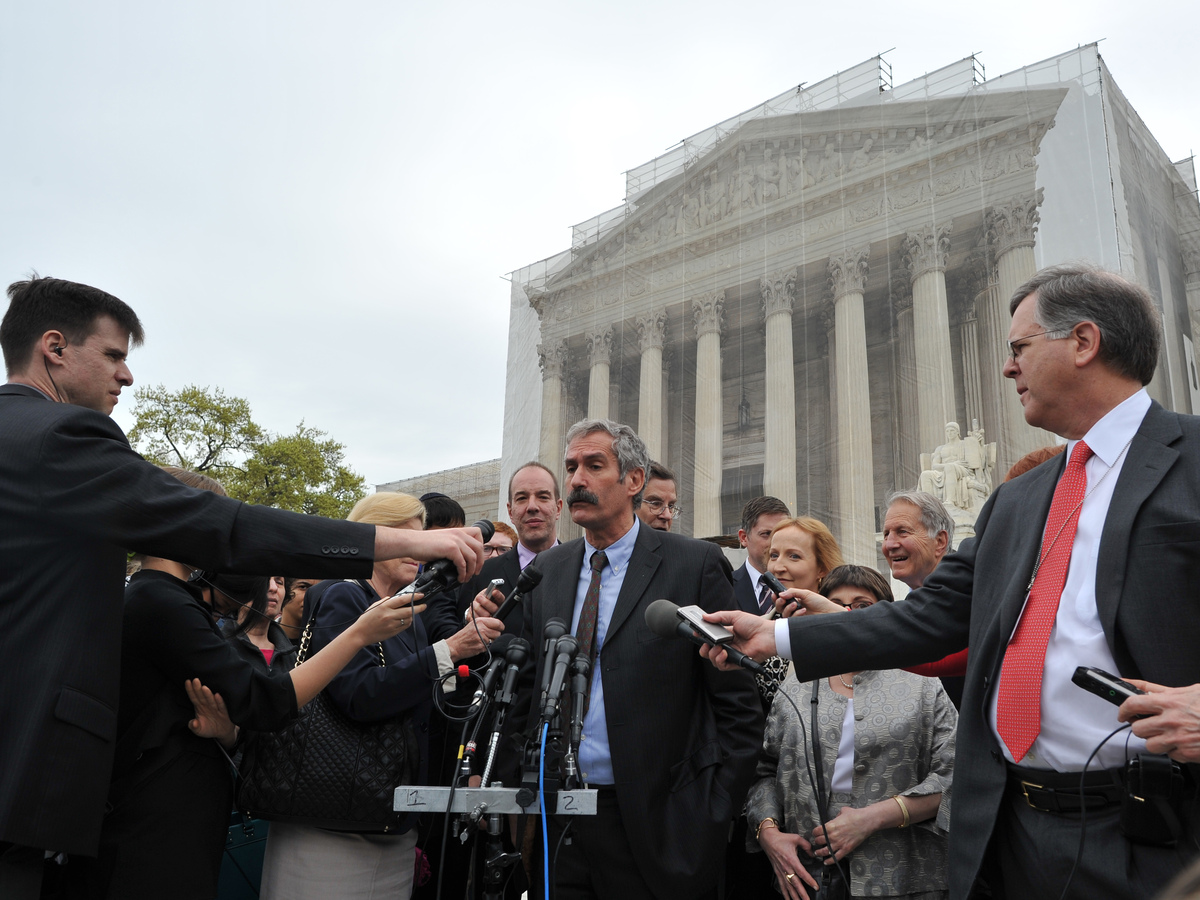 Medical geneticist Dr. Harry Ostrer (center) talks to the press outside the U.S. Supreme Court on Monday. The court heard oral arguments on the highly charged question of whether human genes can be patented.

In a case considered pivotal to the future of science and medicine, the justices of the U.S. Supreme Court seemed skeptical Monday about a claim that human genes can be patented.

Contending that genes can be patented are the biotech and pharmaceutical industries, which see patents as the keys to new scientific exploration. On the other side are doctors, patients and many scientists, who see gene patents as an attempt to monopolize and block future exploration in the new universe of genetics.

At issue in Monday's case were two genes, known as BRCA 1 and 2, which indicate a hereditary link to breast and ovarian cancer. Myriad Genetics, located in Utah, found and isolated the genes, and then patented them.

But the scientific and patient community rebelled, challenging the patents in court. And while they lost in the lower court, on Monday they seemed to have a more receptive audience at the Supreme Court.

Representing the patent challengers, lawyer Christopher Hansen told the justices that Myriad "deserves credit" for finding and isolating the two genes, but he said that the genes are products of nature and thus are not patentable.

Justice Samuel Alito asked: Suppose someone discovers a plant in the Amazon that treats breast cancer, and suppose a new way to extract the substance from the plant is found. You say it's not eligible for patenting?

It may be patentable, Hansen responded, if you've "transformed" what was in nature by concentrating it into a form that works in a way it did not work in nature.

But, asked Justice Elena Kagan, what are the incentives for companies to do what Myriad did if there is no patent? What's in it for them?

Other labs were looking for the BRCA genes when Myriad found them, Hansen replied, and those labs had announced they would not patent the genes if they were the first to find them.

Kagan eventually answered her own question by pointing out that Hansen could have said, "Notwithstanding that you can't get a patent on this gene ... there are still various things that you could get a patent on that would make this kind of investment worthwhile."

Justice Sonia Sotomayor agreed, remarking: Isn't the answer that "the isolation [of the gene] itself is not valuable," it's what you do with the isolated gene?

Where To Draw The Line?

Following lawyer Hansen to the lectern was Solicitor General Donald Verrilli, representing the government. He agreed with part of Hansen's argument, that genes cannot be patented. However, cDNA, a synthetic substance derived from DNA naturally found in the human body, he argued, can be patented.

"Are we fighting over nothing?" asked Sotomayor. If Myriad can patent the synthetic substance, "what does it matter" that they can't patent the gene itself?

Verrilli replied that allowing a patent on an isolated gene "would effectively pre-empt anyone else from using the gene itself for any medical or scientific purpose," and that is not true of a patent on the synthetic substance, which leaves the gene available for general research and "new uses."

Next up was Myriad's lawyer, Gregory Castanias, who took quite a beating from all quarters. His main argument was that by isolating the genes and taking them out of the body, Myriad had created a new substance deserving of a patent.

Sotomayor suggested that when she bakes chocolate chip cookies, using salt, flour, butter, eggs and sugar — all natural products — she might get a patent on her special cookies, but she couldn't get a patent on the natural ingredients.

"You haven't created a type of gene that does not exist in the body," added Justice Antonin Scalia.

In response, Castanias analogized the isolation of the genes to the creation of a baseball bat, which is made up of a natural substance — namely wood.

But the analogy didn't quite stick. Chief Justice John Roberts called out Castanias, noting that what Myriad did was to "snip" out the genes from other genetic material. "The baseball bat is quite different; you don't look at a tree and say, 'Well, I've cut the branch here and cut it here, and all of a sudden I've got a baseball bat.' You have to invent it."

Kagan followed up with her own example, asking, "Do you think that the first person who isolated chromosomes could have gotten a patent on that?"

Castanias replied, "In theory, that is possible."

How about "the first person who found a liver?" Kagan added.

Castanias drew the line there, maintaining that livers, kidneys, gallbladders are the same when taken out of the body as when in it, whereas Myriad, by isolating the genes, gave patients a new thing they didn't have before.

Justice Anthony Kennedy shot back, saying that would have been true with "atomic energy" and "electricity," but they are laws of nature that are not patentable.

"The patent law is filled with uneasy compromises," observed Justice Stephen Breyer. "On the one hand, we do want people to invent; on the other hand, we're very worried about them tying up ... a thing that itself could be used for further advance." So, if you develop a new process to extract sap from a plant in the Amazon that can cure cancer, of course you can patent the process, but "what you can't patent is the sap itself," he said.