Accessibility links
Boston Doctors Compare Marathon Bomb Injuries To War Wounds : Shots - Health News These days hospitals drill for mass casualty disasters like the explosions at Monday's Boston Marathon. But when it happened for real, the first response was disbelief. Then the victims began arriving. Doctors say they were confronted with the kinds of IED injuries that U.S. troops have gotten in Iraq and Afghanistan. 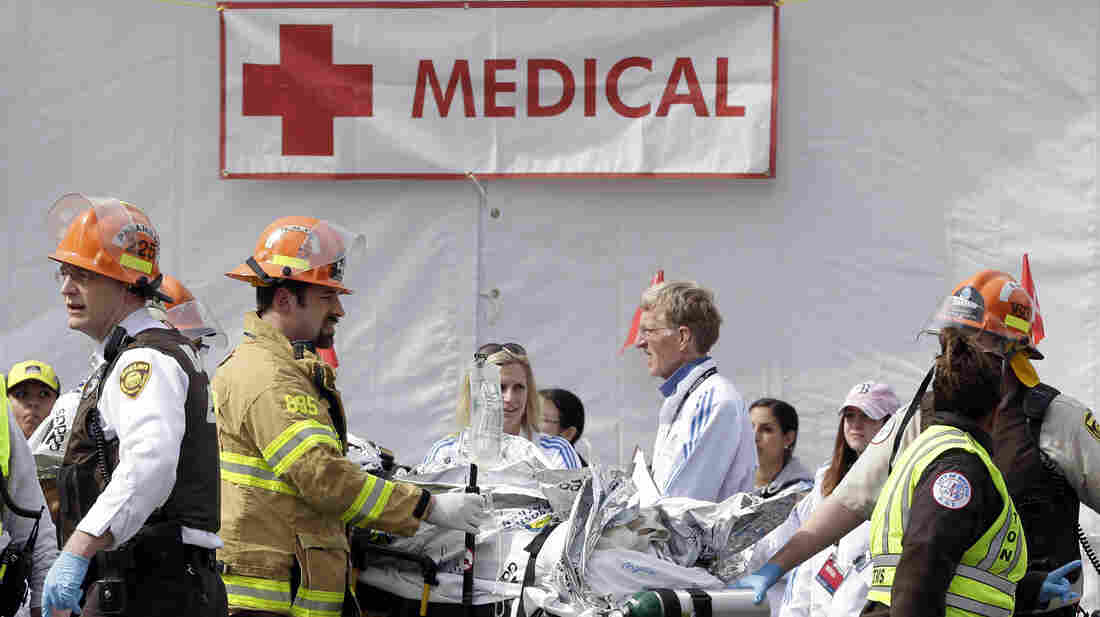 Medical personnel work outside the medical tent in the aftermath of two explosions near the finish line of the Boston Marathon on Monday. At area hospitals, doctors say they were confronted with the kinds of injuries U.S. troops get in Iraq and Afghanistan. Elise Amendola/AP hide caption 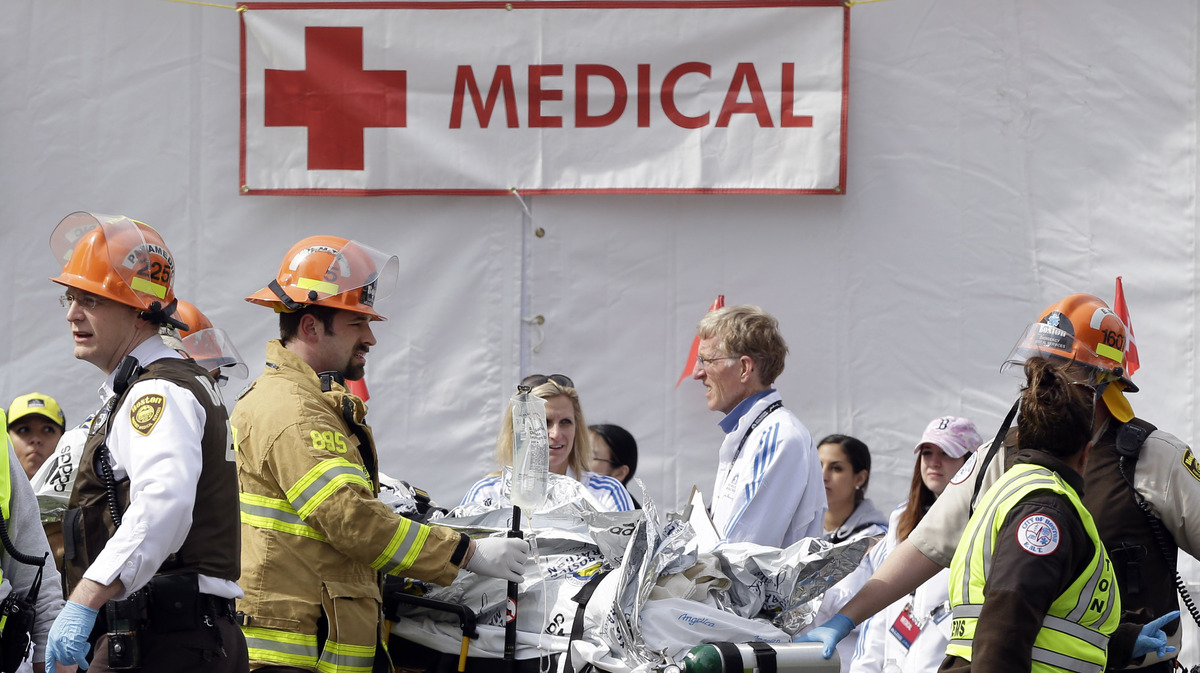 Medical personnel work outside the medical tent in the aftermath of two explosions near the finish line of the Boston Marathon on Monday. At area hospitals, doctors say they were confronted with the kinds of injuries U.S. troops get in Iraq and Afghanistan.

Boston hospitals always staff up their emergency rooms on Marathon Day to care for runners with cramps, dehydration and the occasional heart attack.

But Monday, those hospitals suddenly found themselves with more than 100 traumatized patients — many of them with the kinds of injuries seen more often on a battlefield than a marathon.

So when word came Monday afternoon that there had been an explosion at the Boston Marathon finish line, staffers weren't sure what was happening.

'Is This Another One Of Your Crazy Drills?'

"There was sort of this beat where everybody in the emergency department sort of stopped for a second. And it was almost like you could hear each other breathing. And everybody looked at me and said, 'Is this another one of your crazy drills?' and the first thing I said was, 'No, this is not a drill. This is for real. We need to huddle up.' "

At first they thought it was something accidental, like a manhole cover explosion.

"But once we actually found out that this was a man-made event, there's a certain mental toll that sort of hits a switch in some of the staff. And they say, 'Why would somebody do this?' " Osgood said.

But soon there was no time for such thoughts. Terribly injured patients began coming through the emergency room doors of every big hospital in the city.

'A Lot Of Very Horrific Injuries'

"Limbs that were severed, limbs that, you know, we hope we can save, and some that we might not be able to save. A lot of very horrific injuries that we saw here today."

He said some patients near the blasts had soot around their mouths and noses. That's a sign they'd breathed in scorching air. They needed to be put on ventilators right away, because that kind of burn causes rapid swelling that can shut down people's airways and suffocate them.

Many had pieces of glass and metal embedded in their chests and necks. Ruptured eardrums from the blast were common.

"The device that went off today, for lack of a better term, was an improvised explosive device. And that's exactly what a number of our troops in Iraq and Afghanistan have had to deal with," Epstein said.

Just The Beginning For Many Victims

And like those wounded troops, doctors say, many of those injured in the blasts Monday will require a lot of rehabilitation — both physical and mental.

"These were very disabling injuries in that the blast caused a lot of soft tissue injury. But also the shrapnel just rips through the tissues," said Dr. William Mackey, chief of surgery at Tufts Medical Center.

Mackey said his hospital quickly canceled all elective surgery as his colleagues tried to repair the damage as well as they could.

Patients needed hours of surgery, but Mackey said it was just the beginning for many victims.

"They will definitely need repeated operations," he said.

It wasn't until 9 p.m. that Mackey could sit down in his office and try to absorb the events. He said it had been a very discouraging day.

"Because you don't associate the Boston Marathon with anything but a great sense of pride in the city, pride in the athletes that trained so hard to run the marathon. And to have this happen ... yeah, it's very disorienting. It's been a very upsetting day in many, many ways," Mackey said.

But jittery as this city is today, Mackey doesn't think the marathon bombings are going to intimidate Boston in the long haul.

"I don't think Bostonians are going to be terrorized by this. I think they're gonna be motivated by this. I sure hope more people than ever turn out for next year's marathon," Mackey said.

If they do, it's a safe bet all of them will be thinking about what happened at the finish line of the 2013 Boston Marathon.