Accessibility links
Boston Blasts A Reminder Of 'The Fragility Of Life' : Shots - Health News Psychologists have used the Sept. 11, 2001, attacks and other tragedies to track the arc of recovery from incidents like the marathon bombing. Such tragedies make many people think about their own vulnerability. 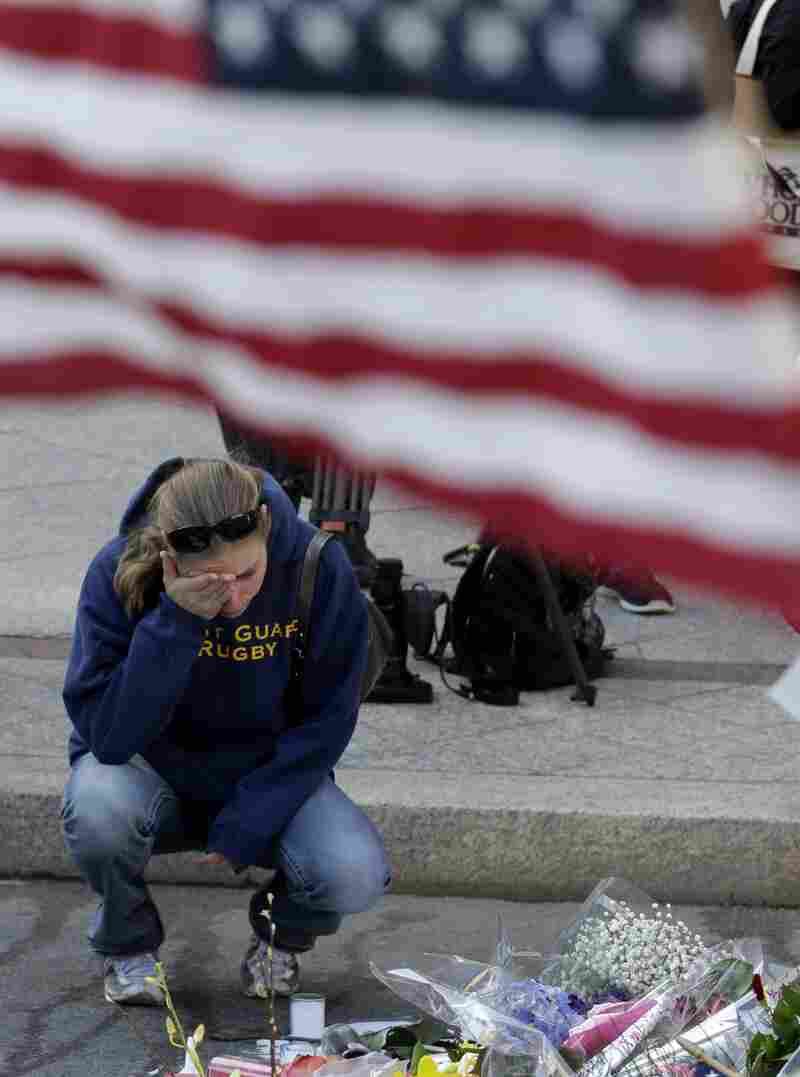 From the first explosion in Boston on Monday to the second, just 15 seconds elapsed. And in those 15 seconds, three people were mortally wounded, including an 8-year-old boy. The number of injured topped 100, and for those of us watching, it was a profound reminder of a reality we'd prefer to ignore.

"When these things happen, it reminds you of the fragility of life, and that death is something that can happen very suddenly, very unexpectedly," says Jeff Greenberg, a psychologist at the University of Arizona who studies how people consciously and unconsciously respond to events that force them to confront their own vulnerability and mortality. "If terrorists don't get us, something else might and eventually will."

The idea of our own death, Greenberg says, is incredibly challenging, and often our response follows a kind of predictable psychological script. There's the horror we feel as we watch the event unfold, but with it, there's a quiet assessment: How vulnerable are we?

That happens, Greenberg says, "generally in sort of a biased way to try to deny your vulnerability."

Greenberg says studies have shown that most of us find ways to discount the possibility that the thing on the screen could happen to us — big and small reasons why we in particular are safe. Greenberg says he even sees this in himself. On Monday after the bombing, he found his mind making a calculation: "I'm here in Tuscon. I'm like, 'This is the last place that anyone is going to bother hitting.' You know, it's not me, and it's not now."

And Greenberg says in the early stages of an event like this, we — and our leaders — do what we can to kind of reassert our sense of control. We make plans for what to do if something bad hits our city; we increase our vigilance. But what's really interesting is how events like this affect us after they've left the front page and our conscious minds.

"The thoughts of our mortality tend to linger outside of our conscious attention but still affect us," he says.

Greenberg and his colleagues know this because for months after the Sept. 11, 2001, attacks, they gave people incomplete word stems and asked them to finish the words.

For a long time after Sept. 11, the probability that people would choose "coffin" instead of "coffee" was higher than normal. And, Greenberg says, when the specter of our own death is there, under the surface, we see the world very differently than when it's not.

"When death is percolating close to consciousness, people become more 'us vs. them' — they become defensive of their belief system, positive toward those they identify with and more negative to those who espouse a different belief system," he says.

Dozens of studies have shown this, and Greenberg believes that this tendency to embrace our own belief system more strongly in the face of death is part the reason the country got more polarized after Sept. 11.

"At first everybody got closer together. [That] lasted a few months. And after that, America got more polarized than ever, and people got more invested in their own belief systems, whether they be conservative or liberal," he says.

Now, obviously, when it comes to Boston, it's still early — it's not close to clear who is responsible for what happened. But still, Greenberg says, Boston is a reminder: Death is coming. There's no way around it.