Accessibility links
Boston ER Doctor Finds Marathon Memories Hard To Shake : Shots - Health News At Massachusetts General Hospital, Dr. Leana Wen cared for people hurt by the bomb blasts at the Boston Marathon finish line. She worried that the next patient she treated would turn out to be her husband. Ten days later, the sounds of sirens still shake her. 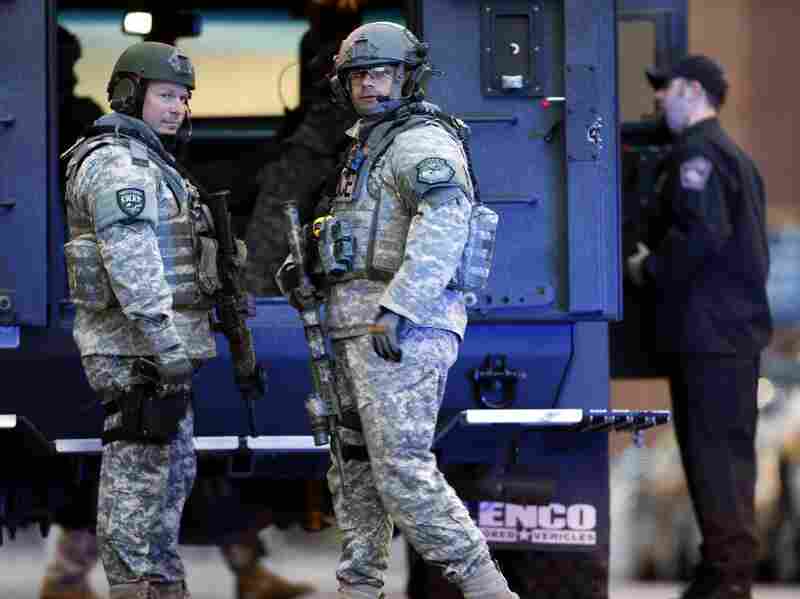 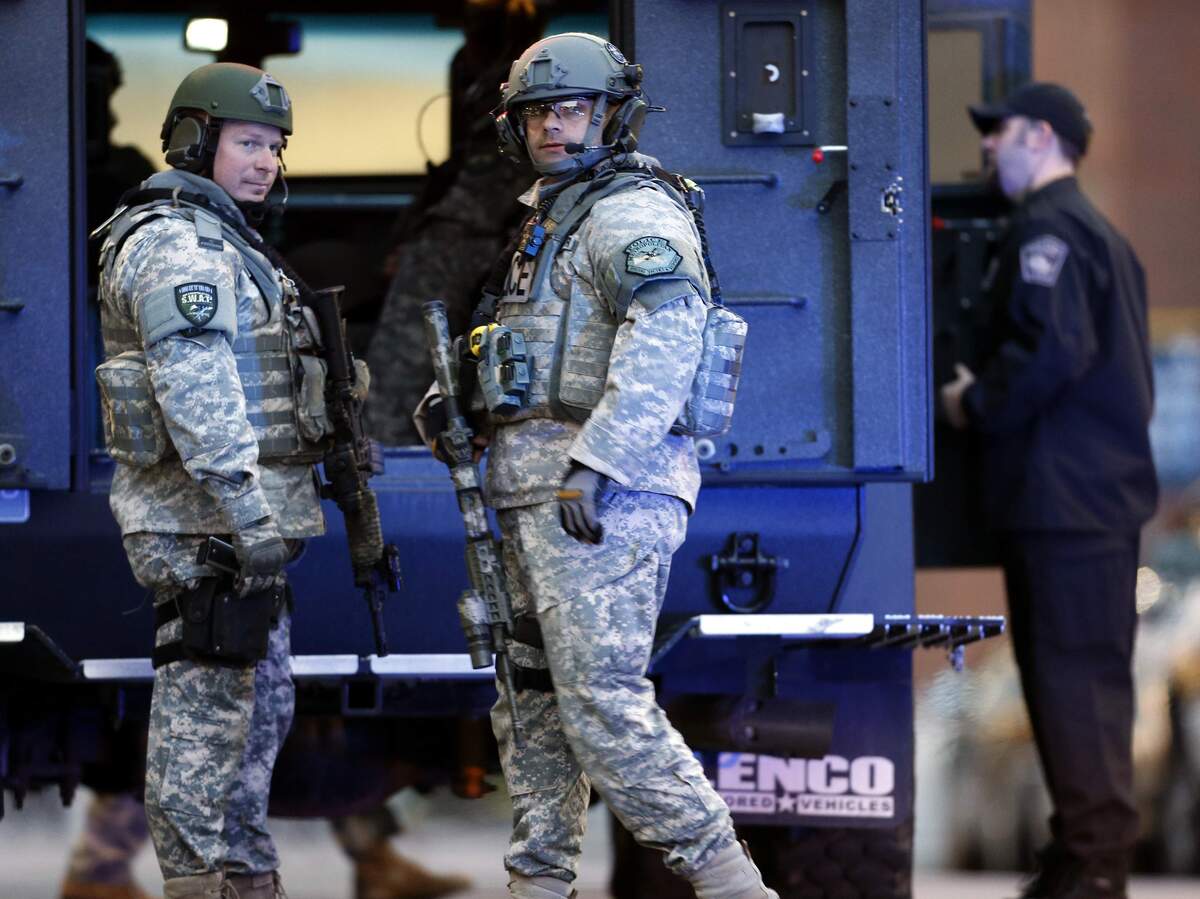 SWAT team members stand guard on the campus of Massachusetts General Hospital following the explosions at the finish line of the Boston Marathon.

I have a recurring nightmare where I am performing CPR on a patient who turns out to be my husband.

It was 2:50 p.m., and the Massachusetts General Hospital ER was filled to capacity.

In the section where I was working, my patients were critically ill, with strokes, heart attacks and overwhelming infections. Even the hallways were packed with patients receiving emergency treatments.

A call over the loudspeakers announced that there had been two explosions. Many people were injured. That's all we knew.

Doctors, nurses and transporters disconnected monitors and rushed to send every patient to other areas of the hospital.

As we cleared the emergency room, there was a second call. These were bombings. There were fatalities and dozens, maybe hundreds, of injured. How many were coming to Mass General? Nobody knew.

Three minutes later, the doors flew open. Stretchers came, one after the other. Some victims had no pulse and weren't breathing. Others had legs blown to shreds. All were covered with blood and soot.

The ER smelled of burnt flesh, and each stretcher left behind a fresh trail of blood.

My first patient was unconscious and bleeding profusely. I knew what to do. Within minutes, he was on a respirator to help him breathe and had two tourniquets to stop bleeding. 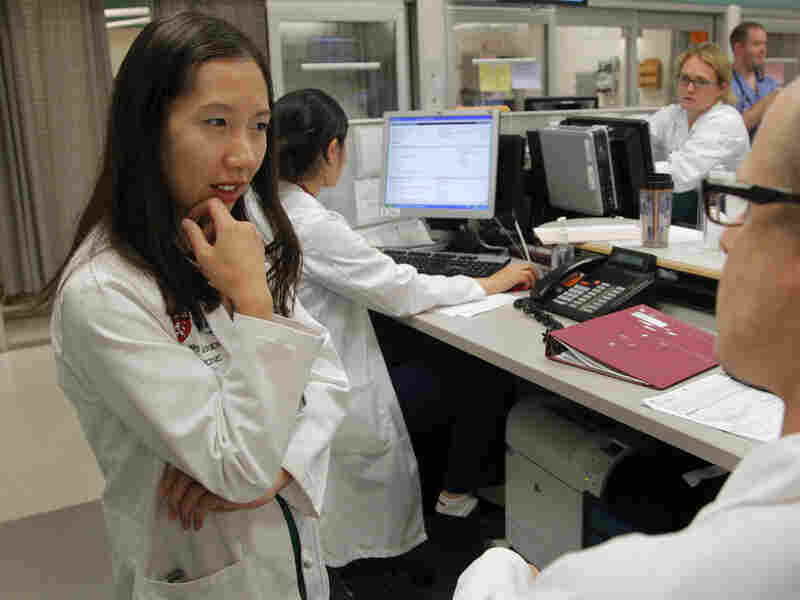 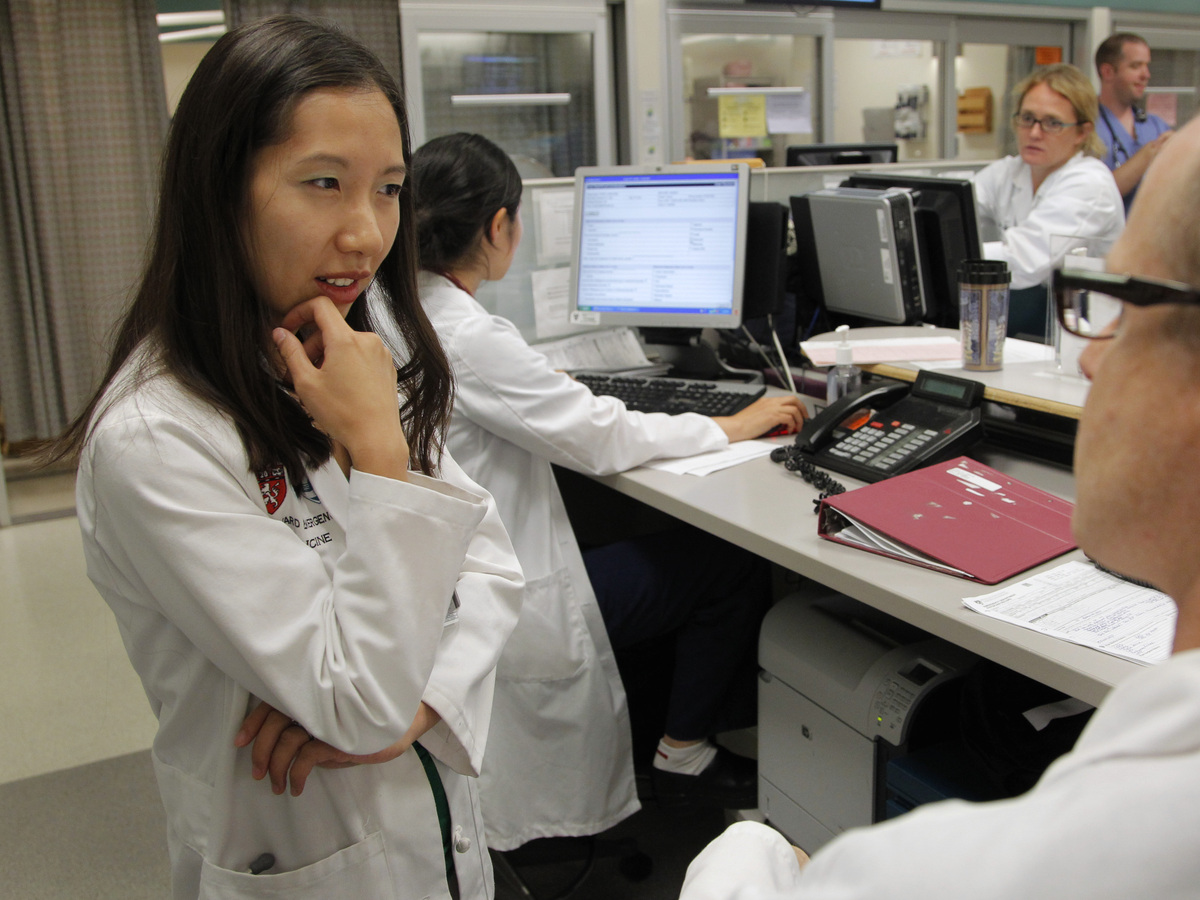 My second patient, a young woman my age, was screaming and crying. One of her feet was gone and she had severe burns. She was wailing for her family. Where was her husband? Where were her children? For her, I had no answers.

Screams mixed with ambulance sirens. The loudspeaker sounded again and again, announcing that more patients were on their way.

Amid the chaos, I asked a paramedic where they were coming from. Copley Square, at the marathon's finish line, he said.

My heart stopped. My husband had texted me to say that he was leaving work for an hour to watch the marathon. We live just a block away from Copley Square, and he was headed there.

Where was he? I frantically dialed his cellphone, only to hear a busy signal. I couldn't keep calling. I had to focus on the next patient in front of me, an unconscious man who was probably going to lose his legs and needed my help.

In the middle of his resuscitation, a terrible thought occurred to me: Could this patient be my husband?

I looked at the pile of shredded clothing heaped in the corner, half-burned and soaked with blood. I didn't recognize the brown belt or the tan slacks.

As more patients came in with shattered bones, bloody stumps and bodies riddled with nails and pellets, I sighed with relief when I didn't recognize their clothing.

I hated myself. What kind of person was I to wish this horrible suffering on someone else's family instead of mine?

An hour passed. Friends called me to say they were OK, but nothing from my husband. I kept texting: Where are you? I love you.

Two hours later, a cellphone rang. A nurse, a surgeon and I all reached for our pockets, but it wasn't ours.

The phone was in a pile of clothes in the corner, in the tan slacks of my patient who had gone to the operating room to complete his amputations. I picked it up and saw the messages that had come through: "Where are you? I love you."

That long day eventually came to an end.

My husband was unharmed. He had misplaced his cellphone, it turned out.

The suspects were identified and one was captured. And Copley Square has mostly reopened.

Life seems back to normal — except it's not. In the ER, I shudder every time I hear the loudspeaker. Each sound of sirens makes me wonder if it's my husband in the ambulance.

At work, I feel numb to my patients' suffering. At home, I break down and cry. Then I feel guilty. Who am I to have these emotions, when so many others suffered so much?

A week after the bombings, I'm not sure what lessons I learned.

I do know that as much anger and sorrow as many may harbor, we need thoughtful reflection to prevent the wrong ideas from taking hold.

The suspects are immigrants, but so are many of the first responders and emergency care providers — like me, an immigrant who came here on political asylum from China.

The suspects were armed and dangerous. But even if every spectator were armed, could guns protect against bombs? The bombings brought on a week of terror, but we cannot live our lives in paranoia and isolation.

For all of us involved, there will be two lives — one before and one after the bombing. I hope that this new life is one that fosters kindness and inclusion, and encourages the collaboration and togetherness that the medical community and all of Boston exemplified last week.

Let these tragic events be a call to action to treat each other as we would our own families.

Leana Wen is an emergency physician at Massachusetts General Hospital and Brigham & Women's Hospital in Boston, and author of When Doctors Don't Listen. Follow @DrLeanaWen