Accessibility links
Gut Bacteria's Belch May Play A Role In Heart Disease : Shots - Health News When gut microbes break down certain foods like red meat and eggs, they produce a compound tied to risks for heart attack, stroke and death, a study found. The research could lead to new ways to prevent heart disease by shifting the mix of gut bacteria. 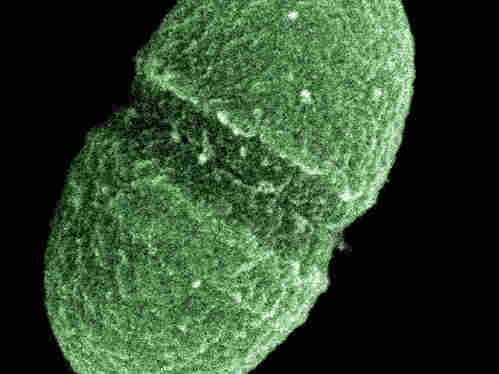 More than just a tenant: Enterococcus faecalis thrives in the human intestine with a varied jumble of other bacteria that help us digest food. National Institutes of Health hide caption 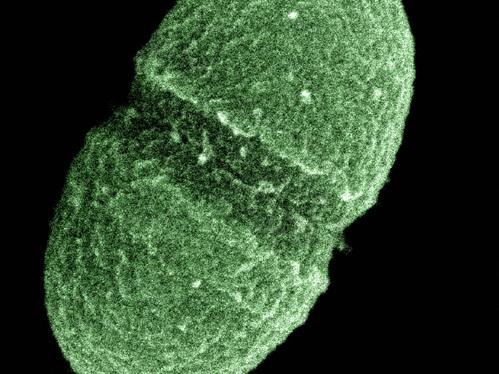 More than just a tenant: Enterococcus faecalis thrives in the human intestine with a varied jumble of other bacteria that help us digest food.

Scientists have discovered what may be an important new risk factor for heart disease. And here's the surprising twist: The troublesome substance seems to be a waste product left behind by bacteria in our guts as they help us digest lecithin — a substance plentiful in red meat, eggs, liver and certain other foods.

Doctors say the research further illustrates the complicated relationship we have with the microbes living inside us, and could lead to new ways to prevent heart attacks and strokes.

"I think it's an incredibly big deal," says Joseph Loscalzo of Harvard Medical School. "It really provides completely new insight into a mechanism for heart disease and stroke that we didn't appreciate previously."

Saturated fats and cholesterol certainly can have a role in heart disease and stroke. But doctors also have long known there's more to it than that.

"[Some] people who have high cholesterol ... seem to never go on to develop heart disease," says Stanley Hazen, of the Cleveland Clinic, who led the new research. "And then [some] others who have more modest levels of cholesterol ... have a very early heart attack."

So Hazen recently started hunting around for other substances in the blood that people who have heart disease have in common. And one substance, known as TMAO (or trimethylamine-N-oxide), kept turning up. It's a metabolite of certain food components, such as lecithin and L-carnitine.

But Hazen wasn't sure TMAO was connected to heart disease, so he decided to put his theory to one kind of test. He measured fasting blood levels of TMAO in more than 4,000 people who had gone in for nonemergency angiography. He then kept track of them for three years to see what happened.

"What we saw was that the blood level of TMAO strongly predicted who was at risk for experiencing a heart attack, stroke or death in that ensuing three-year period," says Hazen, who reports his findings in this week's New England Journal of Medicine. The people in the study with the highest TMAO levels seemed to have roughly twice the risk of having a heart attack, stroke, or death compared to those who had the lowest TMAO levels.

Hazen says a lot more research is still needed to prove that TMAO is more than just an innocent bystander — that it actually causes heart disease. And it's not entirely clear how that might work, though TMAO might help cholesterol damage arteries.

If TMAO does play a damaging role, where does it come from? Hazen has an idea about that, too, based on earlier research. He strongly suspects that bacteria in our guts basically burp out something that gets turned into high levels of TMAO when the microbes break down certain foods, including red meat and eggs.

"We had kind of proven that TMAO in the blood was coming from bacteria in the mice but it had not been proven in humans," Hazen says. So the researchers conducted a second experiment that they described in the same New England Journal of Medicine paper. They fed 40 volunteers things that they knew would generate TMAO, such as two hard-boiled eggs.

"But then, if subjects were placed on a cocktail of antibiotics that are good at eradicating bugs in the intestines, absolutely no TMAO appears in the bloodstream," Hazen says.

The effect of the antibiotics was only temporary — once the drugs were stopped, the bacteria and the TMAO came roaring back. That, Hazen says, shows that the gut bacteria are crucial for producing TMAO.

"This is like, if you will, the waste product that the bacteria are not digesting," he says.

The results help confirm similar findings Hazen reported recently in a smaller study involving red meat. "This study shows that blood levels of TMAO are a strong, independent predictor of future risks for heart attack, stroke and death," he says. "And this appears to be so in individuals who have heart disease and even for people who don't have heart disease or don't have significant risks."

Nobody suggests taking antibiotics as a solution to heart disease. But Hazen and others say that, taken together, the findings from studies such as this could lead to new ways to prevent heart disease, not by eliminating gut bacteria, but by shifting their mix.

"Perhaps a probiotic approach that would involve the intentional ingestion of certain types of bacteria that might alter the population of bacteria in the gut to one that is beneficial [could help]," Loscalzo says.

Perhaps more importantly, the work focuses attention on the complicated relationship that humans have with the microbes that inhabit our bodies.

"They require us," Hazen says. "We require them. And we have co-evolved over the eons together. And they play an essential role in eating and digestion but no one had really appreciated until very recently that they also can sometimes participate in disease processes."