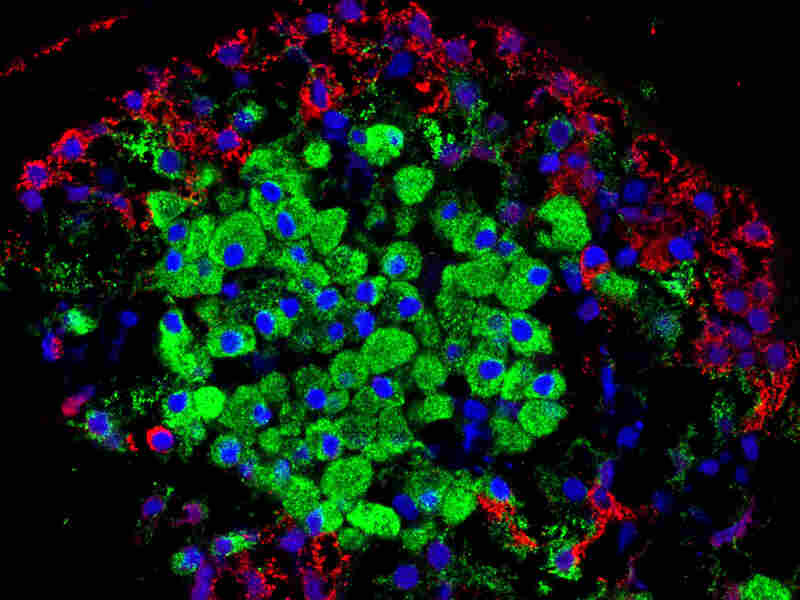 A microscopy image of a rat pancreas shows the insulin-making cells in green. Masur/Wikimedia.org hide caption 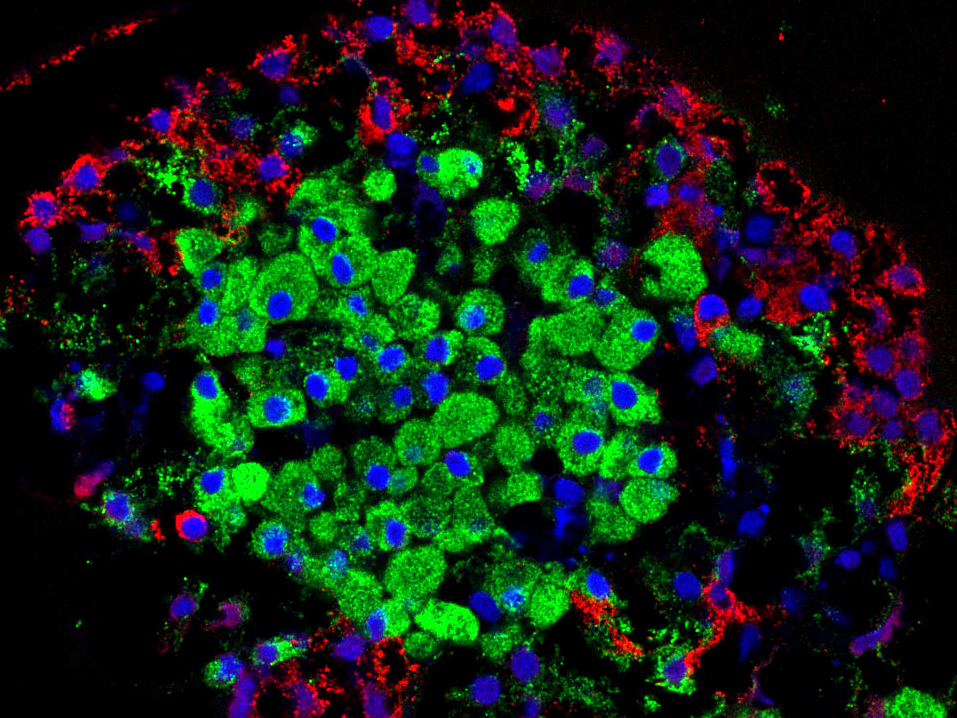 A microscopy image of a rat pancreas shows the insulin-making cells in green.

Editors' note: The study this story covers have retracted their work, saying that they made errors in conducting the experiment that invalidate the results. The study prompted controversy when it was published in 2013, and study author Douglas Melton collaborated with some of those critics to figure out where it went wrong. "It's an example of how scientists can work together when they disagree, and come together to move the field forward," Melton told Retraction Watch, which reported on the retraction on Dec. 27, 2016.

The work is only in mice so far, but it sure is intriguing.

A newly found hormone revs up production of cells that make insulin — the very kind that people with advanced diabetes lack.

Harvard scientists, reporting the discovery Thursday in Cell, call the hormone betatrophin because it stimulates the production of beta cells in the pancreas. These cells make insulin, which the body needs to control blood sugar. ("Trophin" comes from "nourishing" in Greek.)

When researchers turned on the betatrophin gene in the livers of diabetic lab mice, the number of beta cells in their pancreas glands tripled within 10 days and their blood sugar went down.

Humans have betatrophin genes too, as do all mammals. So Harvard's Doug Melton thinks he's got his hands on something that just might get at a root cause of diabetes.

"I'm very excited about it," Melton tells Shots. "It isn't every day one discovers a new hormone — especially one that affects the cell I'm obsessed with, the beta cell."

He's not alone. Mary-Elizabeth Patti of the Joslin Diabetes Center in Boston, who wasn't involved in the work but is familiar with the findings, also calls the discovery exciting.

"I'm sure this will stimulate a lot of work to look at effects of this protein and rapidly investigate whether this could be a new approach to treating diabetes," Patti tells Shots.

First, researchers need to make the hormone in large amounts, then show it works consistently and safely in animals. But at this early stage, hopes are running high.

"If I'm right," Melton says, "you would inject this hormone once a month or once a year, give yourself new beta cells, and they would then very accurately control blood sugars by instantaneously producing just the right amount of insulin. They should reduce the complications of your disease because you're back to the normal control of your blood sugar."

Patti cautions that "it's rare there's a single unique hormone that does everything." And she wonders whether people with Type 2 diabetes, who are resistant to insulin, make betatrophin in normal amounts.

"If someone is insulin-resistant, why wouldn't he make more of this protein and respond to it?" Patti asks. "The question is: Do diabetics make sufficient amounts of this hormone or not? And if they do, do they respond to it or are they resistant to it?"

Melton acknowledges that his scenario of curing diabetes with periodic doses of betatrophin "is the dream of what would happen."

"Let's also remember that at the beginning of new discovery, people like me are always very optimistic," Melton says. "I'm also cognizant of the fact that it could get complicated." He notes that leptin, another hormone, was supposedly going to cure obesity when it was discovered in 1994. But it hasn't worked out that way.

For the past decade, Melton and his colleagues at the Harvard Stem Cell Institute have been pursuing a very different diabetes-cure strategy: tricking stem cells to morph into pancreatic beta cells. That work continues, and he hopes in the next year or so to report "that we're making bucket loads" of beta cells derived from stem cells.

But meanwhile, the group decided to explore what happens when mice are given a synthetic peptide, developed some years back by the firm Novo Nordisk, that blocks insulin receptors. Would mice given this peptide, called S961, compensate by making more insulin?

Luckily for them, mice given S961 promptly started making more beta cells. So then the researchers looked in various tissues — fat, liver, muscle, brain — to see what genes were turned on.

"What popped out near the top of the list of the most abundantly activated genes was this gene that no one had really studied, that we called betatrophin," Melton says.

Within a day or so after its release, the hormone boosts beta cell replication up to thirtyfold. And it doesn't seem to do anything else. That's important because it lowers the risk that betatrophin would cause unwanted side effects or even, in the worst case, promote cancer.

One intriguing discovery so far is that the betatrophin gene gets turned on in pregnant mice. That makes sense, since pregnancy requires a boost in insulin to enable the mother to keep blood sugar levels normal in the face of an increased carbohydrate load.

The Harvard researchers don't know yet if pregnant humans produce more betatrophin, but they plan to find out.

They're also planning an ambitious agenda of follow-on experiments. First, they want to figure out how betatrophin works and look for the receptor on pancreas and possibly other cells that the hormone activates. "We don't need the receptor" to pursue treatment possibilities, Melton says, "but we would like to have it."

Second, they want to make betatrophin in large amounts for further mouse and eventually human experiments.

Third, they want to give betatrophin to rodents with diabetes — not just genetically induced disease, but diabetes caused by overfeeding animals to make them obese, the way that Type 2 diabetes is caused in humans.

They hope that giving such animals betatrophin will not only normalize their blood sugars, but also prevent the heart, blood vessel, nerve and immune system complications that shorten the lives of people with diabetes. Only that would be a true cure.

By the way, Melton thinks that betatrophin might prevent Type 1 diabetes, too, the type that generally arises earlier in life after an overactive immune system destroys beta cells.

To do that, you'd have to identify people at risk of developing Type 1 diabetes — for instance, because a sibling already had it — and monitor them for signs they were getting it too, then giving betatrophin along with immune-suppressing drugs to halt the disease in its tracks.

Melton ticks off the pluses and minuses at this early stage. "On the positive side, betatrophin is very robust in its activity, it's very specific to beta cells, it improves animals' handling of blood sugar, and the human gene for it is virtually identical to the mouse gene," Melton says.

"On the negative side, we don't know its mechanism of action and we haven't yet demonstrated its safety and efficacy in humans," he says.

There are enough positives at this point that betatrophin has already been licensed by Janssen Pharmaceuticals, a division of Johnson & Johnson, and a German biotech firm called Evotec, which already has 15 scientists working on betatrophin.

If Melton's wishes pan out, a percentage of the huge potential profits would go not to him, he says, but to Harvard and his lab.

The original version of this story reported on a study that has since been retracted by the study authors. They say the data do not actually support the study's claim that a hormone spurs production of the beta cells in the pancreas that produce insulin.