Accessibility links
A $5.5 Billion Road Map To Banish Polio Forever : Shots - Health News The World Health Organization released a six-year plan to wipe out the remaining pockets of polio and ensure the virus doesn't come back. With fewer than 20 polio cases so far this year, the world is closer than ever before to eradicating polio. 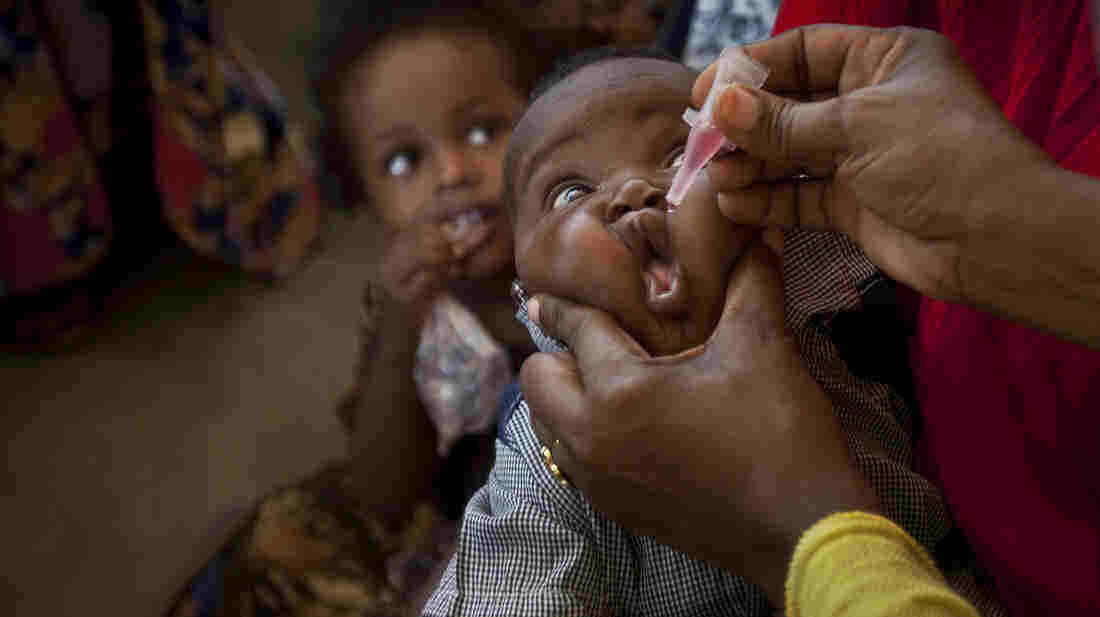 A baby receives a polio vaccine at the Medina Maternal Child Health center in Mogadishu, Somalia, on Wednesday. Somalia has one of the lowest immunization rates in the world. Ben Curtis/AP hide caption 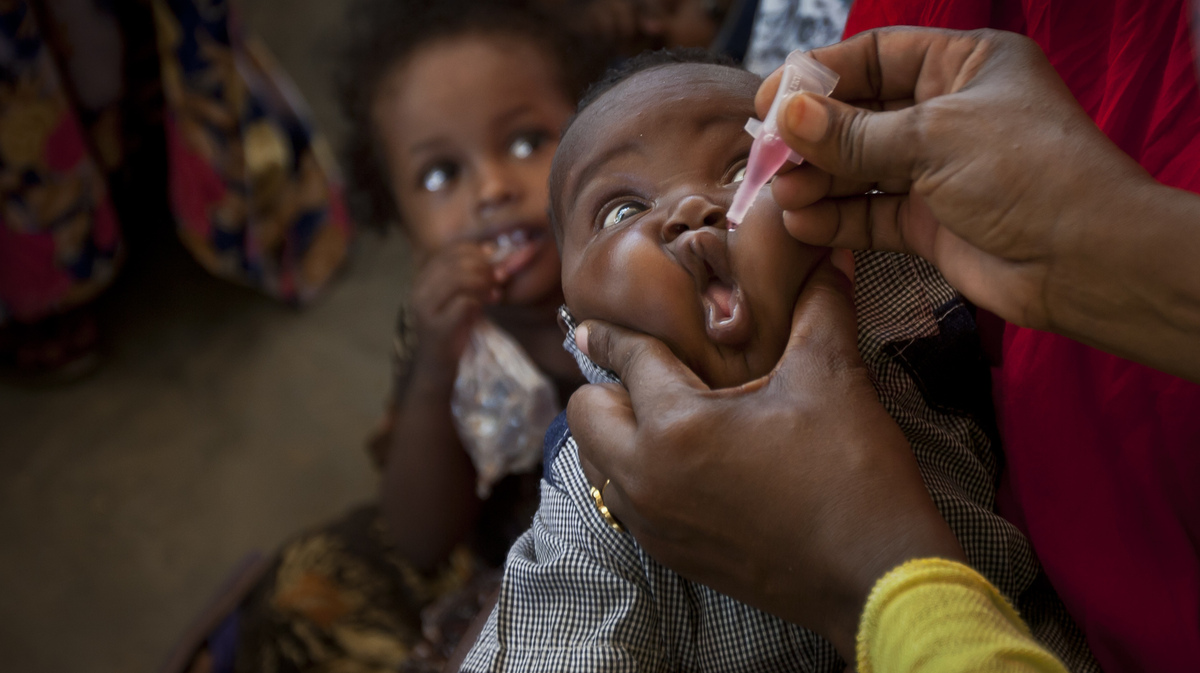 A baby receives a polio vaccine at the Medina Maternal Child Health center in Mogadishu, Somalia, on Wednesday. Somalia has one of the lowest immunization rates in the world.

Polio isn't going easily into the dustbin of history.

The world needs to push it in, throw down the lid and then keep an eye out to make sure it doesn't escape.

That's the gist of a new plan released Thursday by the World Health Organization and other foundations at a vaccine meeting in Abu Dhabi, United Arab Emirates.

It's a six-year, $5.5 billion program, and its goal is to wipe out polio for good.

The plan calls for attacking the remaining pockets of polio in the last endemic countries — Afghanistan, Pakistan and Nigeria — with mass immunization campaigns. It would boost polio surveillance globally and set up systems to respond rapidly in case outbreaks do occur.

At the same time, the new Polio Eradication and Endgame Strategic Plan lays out a strategy to switch to an injectable vaccine instead of the ubiquitous oral vaccine. The latter is cheap and easy, but it contains a live virus, which in very rare instances can cause polio.

The road map also looks at how to contain existing samples of the virus in laboratories and how to secure stockpiles of the vaccine in case polio somehow comes back.

Global health leaders who have been going after polio for decades believe they're finally on the verge of crushing it.

In 2011, there were 650 polio cases reported worldwide. Last year that number dropped down to 223. This year, so far there have been fewer than 20.

How To Get Rid Of Polio For Good? There's A $5 Billion Plan

This trajectory is good news, says Dr. Walter Orenstein at Emory University, who has been working on polio eradication for years.

But the job isn't finished, he says. "The last cases are the hardest," Orenstein tells Shots. "Obviously if they were easy, we would have gotten rid of those reservoirs a long time ago."

Orenstein says the period in between what appears to be the last human case and "the end of polio" is a precarious one.

He points out that the world has appeared close to eradicating polio before. "In 2010, Tajikistan, which had been free of polio for many years, had an introduction of polio from India and had 460 cases," he says, "a massive outbreak."

Less than six months ago, Egyptian health officials found live polio virus circulating in the Cairo sewage system, despite the fact that Egypt hasn't recorded a single case of polio-induced paralysis since 2004.

"I think the information from Cairo points out that as long as we have reservoir countries, polio can travel," Orenstein says. Health workers traced the virus in Cairo back to Pakistan.

"There's no evidence that polio has been re-established in Egypt, but it's clear that Egypt got exposed because of someone from Pakistan coming there," he says. "All the more reason we need to focus on the reservoir countries as we continue to maintain surveillance everywhere else to make sure it isn't being transmitted in other countries."

India launched a massive campaign to eliminate polio in the late 1990s and seems to have succeeded. There hasn't been a single case recorded in India in more than two years.

But there's a constant fear there that polio could get re-imported and come roaring back, says Deepak Kapur, who heads up Rotary International's efforts to eliminate polio from India.

"We in India have been guilty of exporting polio virus to almost every part of the world," Kapur tells Shots. "And by the same channels by which it went, the virus could well come back into India."

Kapur and others involved in the polio endgame say one of the biggest challenges now and in the coming years is keeping people focused on the final goal until it's clear that polio is really, truly gone.