Accessibility links
How To Turn Down The Heat On Fiery Family Arguments : Shots - Health News Psychologists say kids who get entangled in their parents' arguments often suffer shame and low self-esteem. So some are trying to teach parents who feel they just can't stop arguing when they get angry how to "get to calm." 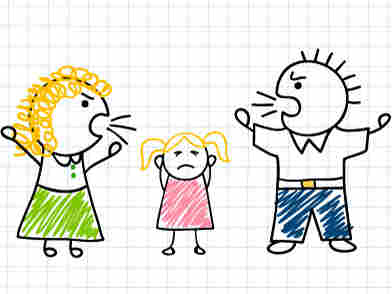 Parents can minimize the negative impact of their arguments on their children using a few simple techniques to calm down. iStockphoto.com hide caption

All parents are bound to disagree, argue or even raise their voices with each other.

But psychologists say parents can minimize the negative impact of their arguments on their children. It's just a matter of using a few simple techniques to turn down the heat and repair the damage after it's over.

Psychologist Suzanne Phillips at Long Island University says one of the most important things for parents to remember when they're on the verge of a big argument is not to involve the child.

"Remember, the child in some ways identifies with both of those parents," Phillips says. "So if the mother is really asking the child to be her sounding board, advocate or collaborator against the other parent, the child loses the opportunity to feel good about the other parent and is put in a very conflicted situation."

Even little swipes and criticisms can be harmful. Because kids identify with their parents, they interpret negative characterizations as also aimed at them. Phillips says this is why we often see "shame and low self-esteem in children who are caught in these battles."

"Remember who it is you're arguing with before you open your mouth," says clinical psychologist Alan E. Fruzzetti at the University of Nevada, Reno. "When we get negatively charged, our cognitive performance goes down, and we often miss the larger context and start arguing as though our loved one is our enemy."

Even in the heat of discourse, it's important for parents to remember why they're there in the first place. "You have to remember, 'This is someone I love,' " he says.

For parents who feel they just can't stop arguing when they get angry, University of Washington psychologist Laura Kastner has written extensively about what she calls "getting to calm."

"The default position should be to say nothing," she says. "A good mantra is: 'Don't just do something, stand there.' "

While standing there, you can begin to regroup, she says. Breathing exercises can help parents "get to calm."

This is how it works: Breathe in deeply over five seconds, exhale over five seconds, and repeat this focused breathing for about three minutes. Move away from the area of conflict to do this. Get up from the dinner table and go to a corner of the room.

If you're in the car, Kastner says, "stop talking, grip the steering wheel, and engage in the breathing exercises" before returning to the conflict.

This should bring down your heart rate, reduce the release of adrenalin and stress hormones, and put you back in a "zone for rational and even optimal thinking," she says. The best part, says Kastner, is the more you do it, the more automatic "getting to calm" becomes.

For parents who have the time, Kastner suggests a course in mindfulness. "It's the gold standard," she says. "It trains your brain for full relaxation with the capacity to focus your attention on the present moment without judgment." It takes a lot of practice, but the benefits are big.

What happens if you still fail to slow down the dispute? Do damage control when it's over, Phillips says.

There are things parents can say to repair the sad or hurt feelings children might have. "It's really important for them to know that 'Daddy and I are going to be OK,' " Phillips says. "[Tell them,] 'Daddy and I love each other, but sometimes we don't agree and we have to figure out how to disagree without yelling so much.' "

It's even a good idea to apologize to children for fighting in front of them. That helps kids regain a sense of security. "Nonverbal cues — holding the child, putting an arm around Daddy again — these things help re-establish a child's major place of safety, which is the parent and the parents' connection," Phillips says.

And, ultimately, there is the so-called "halo effect." In a family where things are mostly positive, even a bad argument can be well-tolerated. Phillips says that means affirming all the good things in life, such as "the cake you baked, Daddy's raise, getting on the soccer team or doing homework in a timely manner."

And remember, not all arguments are equal. A good, constructive argument where a decision is reached or a problem is solved can actually teach children how to handle their own disagreements.

"When children learn emotional regulation and coping skills from the parents," Kastner says, "it builds resiliency and a sense of mastery that they can handle their own feelings in a competent way."