Accessibility links
How Doctors Would Know If Syrians Were Hit With Nerve Gas : Shots - Health News An international team of doctors is helping Syrian health workers recognize the signs of a chemical attack. They're also teaching them how to collect and preserve tissues as potential evidence if war crimes charges are brought. 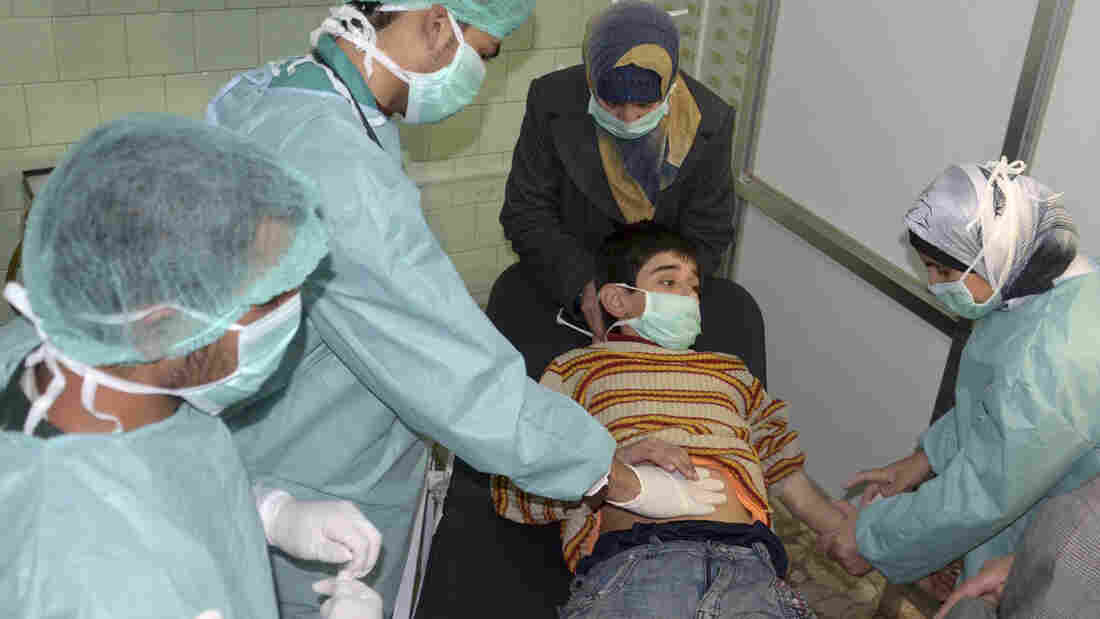 Doctors at a hospital in Aleppo, Syria, treat a boy injured in what the government said was a chemical weapons attack on March 19. Syria's government and rebels accused each other of firing a rocket loaded with chemical agents outside of Aleppo. George Ourfalian/Reuters/Landov hide caption 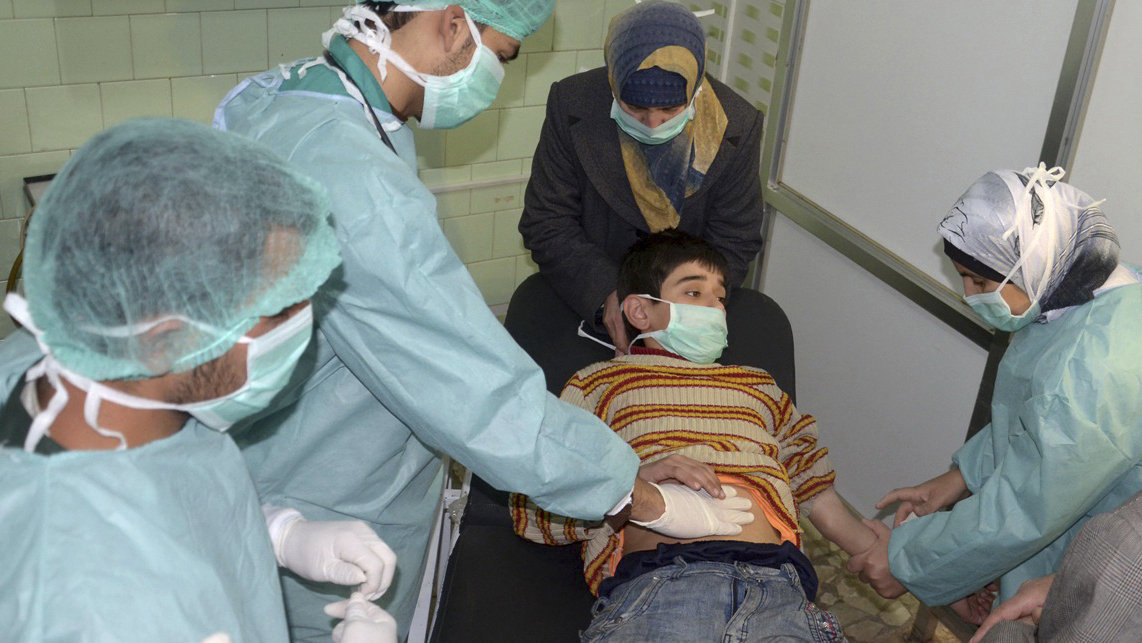 Doctors at a hospital in Aleppo, Syria, treat a boy injured in what the government said was a chemical weapons attack on March 19. Syria's government and rebels accused each other of firing a rocket loaded with chemical agents outside of Aleppo.

But that's not the same as proof positive.

Proving that someone has violated the international taboo on chemical weapons can be very hard. While governments seek more evidence, Syrians may be in danger.

That's why a physicians' organization is trying to help medical workers in Syria recognize the signs of a chemical attack. The effort is meant to save lives, but it could also generate evidence that governments are seeking.

Physicians for Human Rights is setting up a network to get fact sheets about chemical weapons into the hands of Syrian physicians. This group has a long record of working with medical professionals in trouble spots to protect civilians and reveal war crimes.

The fact sheets list the symptoms of exposure to mustard gas or nerve gases, like sarin and VX. They explain how to treat people and how doctors can avoid being contaminated themselves.

Getting this information to Syrians is also important to rule out false alarms, says Susannah Sirkin, who directs PHR.

False alarms could cause panic or, as happened in Iraq, lead the U.S. military to take action based on inaccurate claims about weapons of mass destruction.

The fact sheets also explain how to take samples of blood, urine and hair from patients and preserve them as evidence. "Obviously, if these weapons are being used, have been used or might be used soon, it's in everyone's interest that this be known and that they be identified," Sirkin says.

That sample analysis would likely be done outside Syria.

Toxicologist Alastair Hay, from the University of Leeds, says nerve agents leave a trail in the body.

They attack a crucial enzyme that normally works like an on-off switch between nerves and muscles. A nerve gas eliminates the "off" signal. "Basically it's on, on, on, on, on all the time," Hay, who also works with PHR, says. "So you then get a whole range of effects. ... [It's] absolutely dreadful."

Things like terrible headaches, sweating, seizures and respiratory failure, which can lead to death.

But other ailments — like pesticide exposure — produce similar symptoms that can be mistaken for nerve gas exposure.

So the gold standard of proof for nerve gas, Hay says, is tracking down the agent itself in tissue samples.

"The chemical nerve agent will be attached to the enzyme," Hay says. "It physically inactivates the enzyme and remains attached to it." You can track down and isolate that nerve agent even weeks after a person is exposed, he says.

Physical samples of nerve agent in soil are harder to get because nerve gas evaporates quickly. But Hay and PHR succeeded in doing that in 1992.

They brought back soil and a contaminated piece of a bomb from northern Iraq, confirming that Saddam Hussein's forces gassed Kurdish civilians there.

But getting samples is just the start, Hay notes. To make a legal case --whether it's against the Syrian government or opposition group — you need an ironclad chain of custody. "You need to be able to have somebody swear, if you like, that the material was in their custody at all times, whoever it is with before it gets to a laboratory," Hay says.